A beautiful autumn day and what better way to enjoy it, than by being out in the fresh air on an orchid hunt. Debbie arrives home after her overnight shift and tucks into the passionfruit and yoghurt I had prepared for her breakfast. We then jump into the Triton for the drive out to what we refer to as our “Cape Le Grande” rock.

Parking at the abandoned picnic ground we decide to skirt around the rock in an easterly direction which we have not done before. We have to dodge many very large cobwebs which at times housed up to 6 massive spiders.

As is becoming the norm, Debbie finds the first orchid of the day. A small patch of White bunny orchids (Eriochilus dilatatus subsp. dilatatus) is found growing at the base of the granite rock.

Up to 7 flowers per orchid

As it is very dry the orchids we found were very few and far between. All were found at the base of the rocks or in moist aspects on the rock. Only White bunny orchids were found. So after about 1 hour of searching we return to the Triton for morning tea, of an Anzac biscuit and coffee. The plan was to check the western and northern aspects of this rock, however due to the dryness and scarcity of orchids, we move onto another location.

Coolinup road is our next location. (Mud Map SE 38/39). The little granite rock proves fruitful again. First up are more White bunny orchids, which are growing under and in between shrubs, which must provide some, protection from being eaten and shade from the hot sunshine. Nearby I find a Hare orchid (Leporella fimbriata) still in bud.

Flowering in the bright autumn sunshine 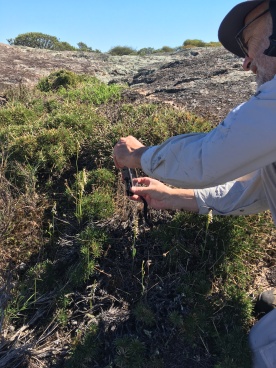 We travel further along Coolinup road to our special location, grab a drink of water and head into the scrub to see what we can find. Debbie excitedly comes across a flowering Hare orchid. These little beauties are found flowering March to June from north of Kalbarri to Israelite Bay. 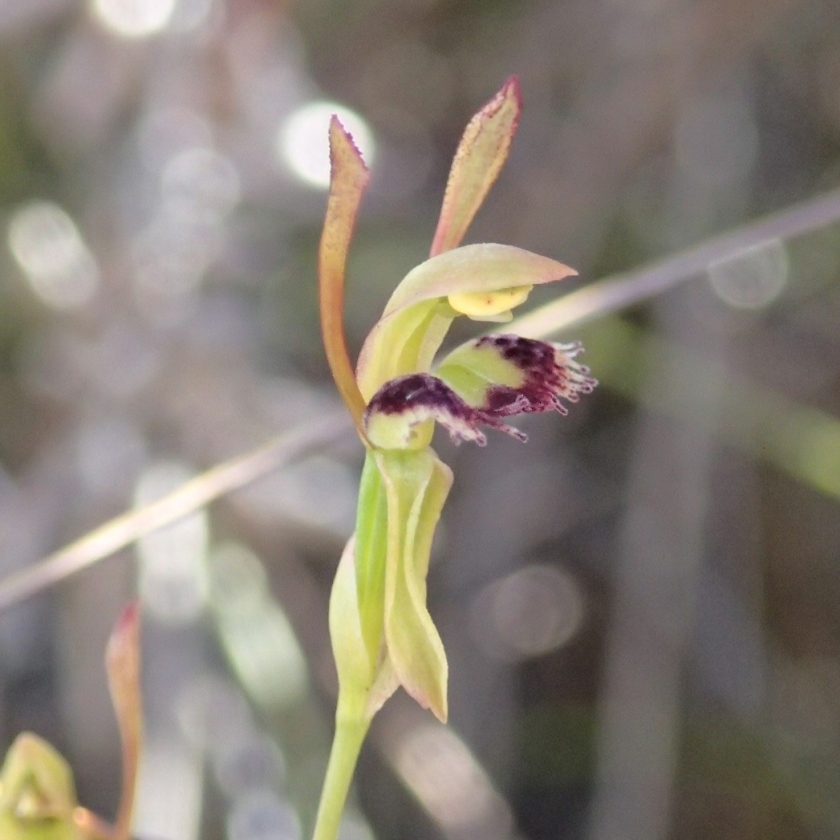 Green and purple flower with erect ear like petals

We search high and low but no other orchids are found, not even a White bunny orchid. Getting hungry we make tracks back to the Triton and then head west to find somewhere to eat lunch. We pull over at the abandoned tennis court on the Backmans & Lane Rds intersection where we enjoy our chicken & egg salad, washed down with passionfruit mineral water for lunch.

As Debbie has another overnight shift to work I decide it is time to head home, however Debbie has other ideas. She gets me to detour via our Myrup Road location to see what is happening there. Only orchid found are further White bunny orchids.

Appears it may be a poor season this year due to the very dry start. As at 26/4 only 20 days of rain totalling 43mm. Average till end of April is 173mm. Fingers crossed for some good rains soon.