So after a lazy morning I head out to Mount Burdett Nature Reserve (Mud Map SE 36) to have a scout around.  Parking up on the rock,  I have a bite of lunch before heading off on my search.  Within 2m of the Triton I find my first White bunny orchid (Eriochilus dilatatus subsp. dilatatus) growing up through a shrub.  To get into the light the orchid has grown to 350mm in height, which is the maximium by my reference book. The smooth, relatively narrow leaf confirms the classification.

Then right at the edge of the rock I find a very small version of the White bunny orchid. Measuring only 55mm in height. However given it’s size and size of the leaf I am now of the opinion this it is in fact a Granite bunny orchid (Eriochilus pulchellus) which grows, as the name suggests, on granite outcrops, of which Mt Burdett is one.  These little fellows flower April and May and occur in the Perth hills, between Northcliffe and Bremmer Bay and between Esperance and Balladonia. Proceeding around the base of the rock I find many more bunny orchids, which vary in height and number of flowers per stem.

Only 55mm in height.. Small fry 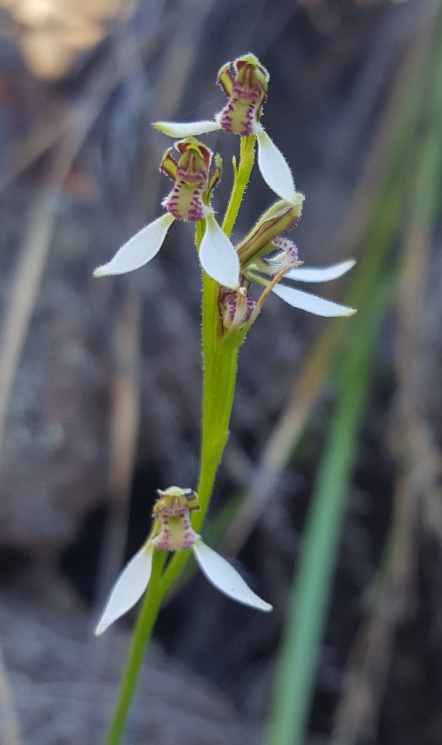 Up to 10 flowers per orchid 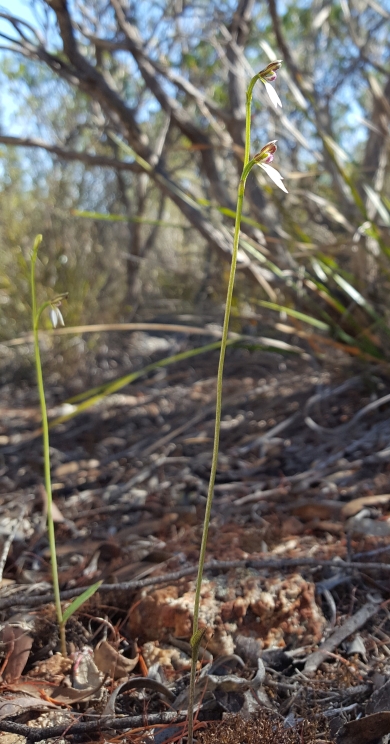 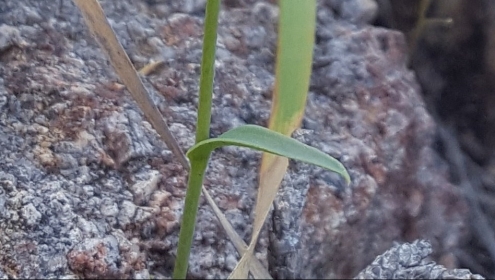 Just as I was about to accept that the only orchids to be found today would be bunny orchids, an orchid of differing colours catches my eye. You little beauty, I have found some Hare orchids (Leporella fimbriata) which flower March to June from north of Kalbarri to Israelite Bay. These guys are cute little orchids with erect ears and a beard. Within 2 m of the first 2 I found a grouping of 4. Very happy!!

Someone lurking in the background 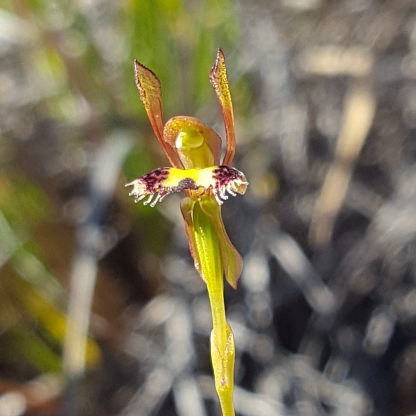 Dorsal sepal curves over the column

Can on rare occasions, have 4 flowers per orchid

It is now just past 1pm and I have found myself on the opposite side of the granite outcrop to where I had parked the Triton, so I had better start heading back. I won’t backtrack though, but climb up to the phone towers and then take the usual track back to the Triton. Pushing through scrub I did not find anything else other than the occasional bunny orchid.  I did however come across the biggest meat ant nest I have ever seen.

Size comparison to my drink bottle

Heading back down the rock from the summit I come across another White bunny orchid as well as many Granite bunny orchids. Due to the time though I cut my photo taking time down as I need to get to the airport to pick Debbie up, on her flight home from Perth. 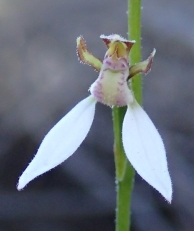 Looks like a little man with big white flippers on 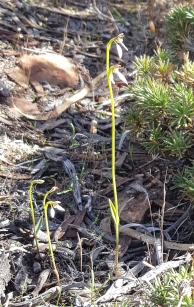 Much larger leaf visible – Not in focus unfortunately

Happy to have found the Hare orchid today. This now completes the species found for the month of May to the four known for my area.