Leaving Kwolyin by our usual 10am we head south towards Corrigin on Shepherd Road and choose to visit Pikaring Nature Reserve which is located on the Old Beverley Road. This is a new location for us so we drove slowly along until we found a place to park the Triton and camper well off the road. We then went exploring.

Woohoo, finally we find some orchids. Dark banded greenhoods (Pterostylis sanguinea) are found growing on the rock which is the main feature of this reserve. These orchids flower June to September and are found in Victoria, South Australia and Tasmania as well as in WA. Here they are found from Mullewa to Toolinna Cove, but do not occur in the South west corner. 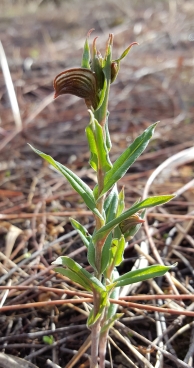 Can have up to 12 stem leaves

Flowers have a nodding appearance

Only other orchids found were some spent White bunny orchids, so after morning tea we move on, but not too far before we pull off the road into Boolanelling Nature Reserve, which is very open woodland habitat. No luck in finding any orchids in flower but we did find Redbeak, Spider and Sun orchid leaves and Pterostylis rosettes. The place was also occupied by lots of large termite mounds.

As it is already afternoon we move on. We planned to visit Talbot rock however it was in private property we had to forgoe this spot. Arriving in Yealering, we have another cuppa soup lunch, this time overlooking a somewhat dry lake, before grabbing a takaway coffee as a special treat. Now we need to decide where we are going to camp the night.

About 15kms away is Malyalling Nature Reserve, which we have visited before, so we decide to check it out again. On the old sportsground, which is not a part of the Nature Reserve we find a suitable spot to camp. It even has a shelter with an existing camp fire spot. A quick look around over the rock and through the woodlands only turned up leaves, rosettes and some yet to flower Pterostylis orchids.

Our campsite for the night

All set up for a great night under the stars

After another wonderful nights sleep and a hearty breakfast we pack up and head off, as our quick search last night was enough to confirm this to be another orchidless location, for now. We make a beeline to Toolibin Nature Reserve, which contains Toolibin Lake, and have a search of the woodlands along the track leading into the picnic area. Last visit turned up lots of orchids but no such luck today.

Next location to checkout is Yilliminning Rock as we have previously driven past without stopping, usually due to time constraints on a drive home from Perth, however today we have time. Parking up in the picnic area, before enjoying lunch, we decide to check out the rock. After a good 10 mins of searching we come across some Banded greenhoods (Pterostylis vittata) which flower April till September in locations between Perth and Balladonia. Whilst I’m getting some photos Debbie yells out in excitement as she has finally found another type of orchid. They appear to be Green-veined shell orchids (Pterostylis scabra) which flower May to August over a large range from Kalbarri to Esperance.

So many rosettes with only a few flowering 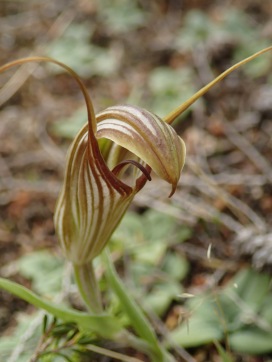 Shell orchids in the foreground

Nothing more found on the rock other than what appears to be Elbow orchid leaves, so after finding the striking Sea-urchin hakea (Hakea petiolaris) we make our way back to the surrounding woodlands for the trek back to the picnic area. In this woodland I find more Banded greenhoods, however some are brown in colour but do not appear to be Dark banded greenhoods, due to the lateral sepals being more elongated than broad. 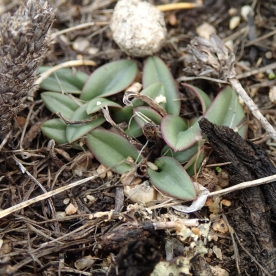 Leaves will be withered by flowering time – Oct to Jan 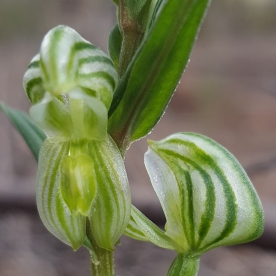 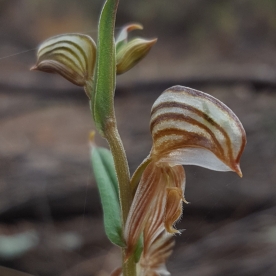 This flower was growing on a bare branch 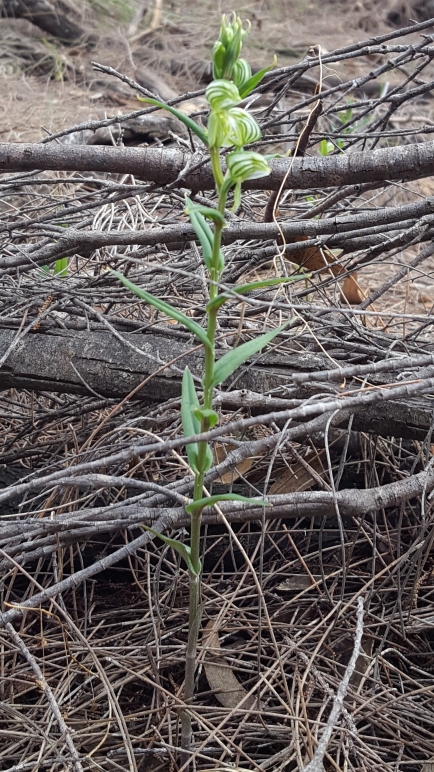 After enjoying lunch we head into Narrogin to get some supplies. We visited the Dryandra Country Visitors Centre and obtained information on the local reserves. We chose to check out Foxes Lair a reserve in the town boundary. We drove through the reserve and decided to park at the Arboretum carpark and take the Granite Walk. This walk is 1.2km in length and incorporates the Arboretum. It was a pleasant walk however was not producing any orchids until we reached the section of granite boulders. Here we found some Dark banded greenhoods.

Can grow up to 400mm in height

Growing in the Sheoak needles

Insect-like labellum flicks up when triggered by pollinator

As it is now after 3pm we make a move to an area called Newman Block where there are some more marked walk trails. Due to limited time before sunset, we decided we had better find an overnight camp spot. As we slowly checked out the woodlands I spy a Banded greenhood at the side of the track. As Deb reverses back so I can grab a photo, she sees a very small White bunny orchid. Exact ID unknown.

We find a camping spot and set up for another night around the campfire. Today proved a much more fruitful day so fell asleep quickly after a good feed and a few bevvies. 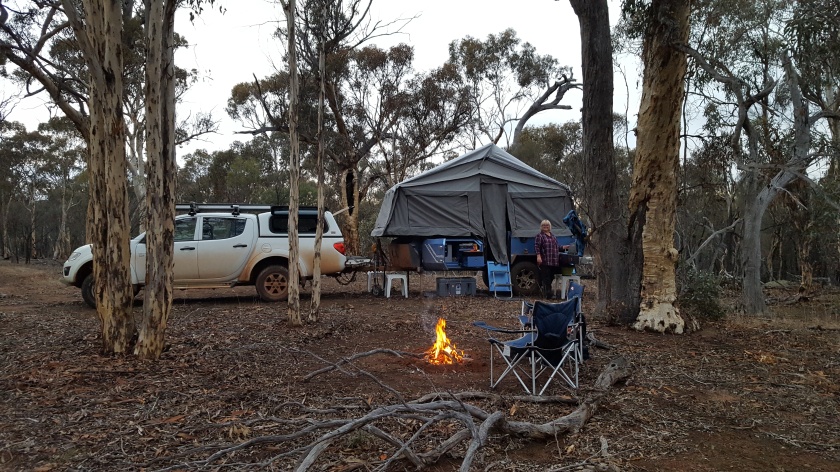 This morning after breaking camp we set off on the Sandplain Walk which skirts an incline before we climb this to the sandplain. On the incline up we finally find a Dark banded greenhood in flower.

Location we found the Hare orchids 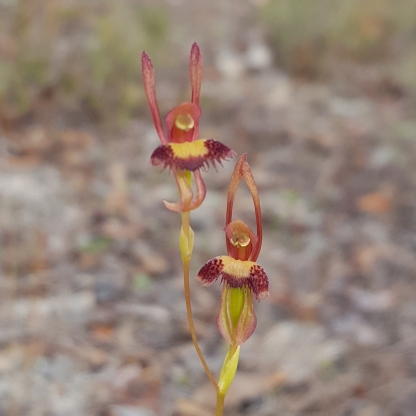 Leaving the sandplain we head into a thicket of trees where we find some Banded greenhoods. One of which was a good 350mm in height, so took a photo alongside my lower leg for scale.

Green and white stripes. Flowers do not nod

Height comparison to my lower leg

We arrive back to the Triton and camper around 11.30am and make tracks for our next planned stop. This being near Piesseville (Mud Map SE14) which did not turn up anything other than leaves ready for later in the season. So we travel via Piesseville to the North Wagin Nature Reserve where we grab some lunch. Then time to look around. So many Banded greenhoods found, some with really crowded inflorescences. 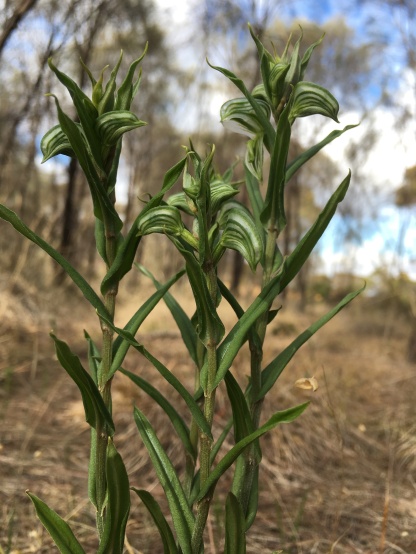 We fill up the Triton in Wagin before moving onto a new location. Just southeast of Wagin is Puntapin Rock on Puntaping Rd. We go for a exploratory walk up the rock and only find leaves and sprouts of unknown origin. 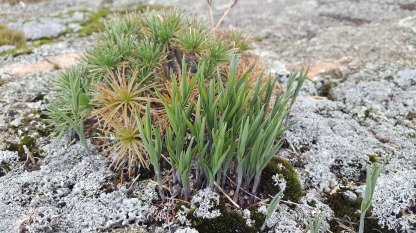 So now we need to find a campsite for tonight. Passing through Dumbleyung we head east and finally pull into an old gravel pit near Tarin Rock. We light what will be our last campfire of the trip and enjoy a red wine. Cooked up a meal in the camp oven and settled in for a cold night. 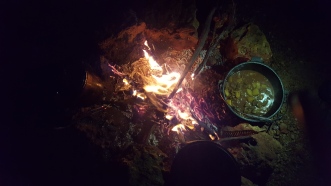 Checking dinner cooking on the fire

Woke up to a foggy morning, so jumped out and got the fire going for some warmth. After our last breakfast on the road we pack up camp and head to a usual stop, the Lake Grace Lookout. It is still so dry here so we expect to find nothing. However under the usual bush I find the stand of greenhoods. 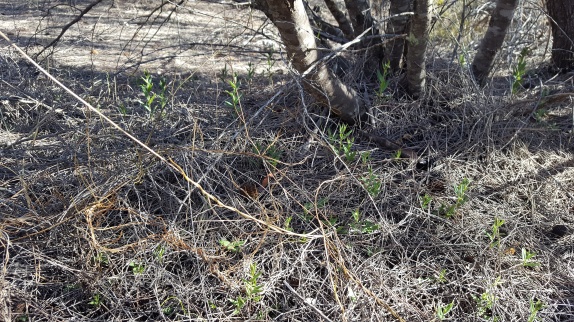 Lots under this one bush

Still yet to open

Stopping in Lake Grace we grab a coffee at Cafe Arjo, which was really yummo, then drive on to Newdegate. We had to grab a photo of the CBH Silos before buying last minute supplies at the general store. Then it was eastward to Lake King. 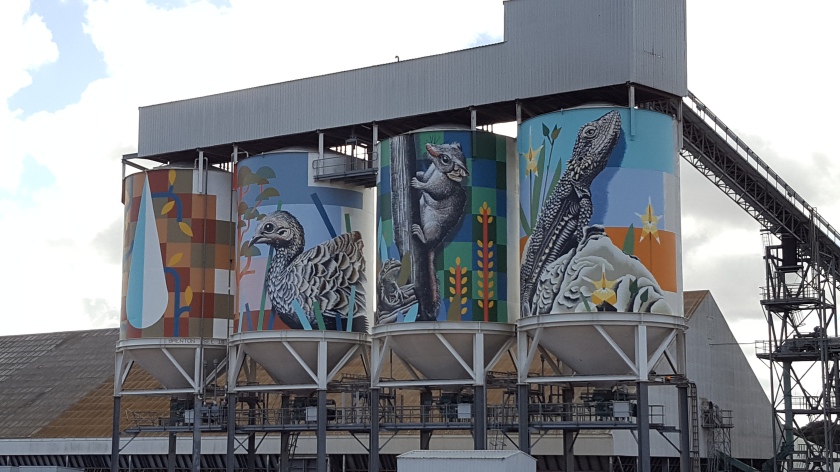 Notice the Cowslip orchids with the lizard

First up we grab lunch at the Lake King Tavern before heading off on Walk Trail No.1 which takes us from the Tavern to the General Store. Then we take Walk Trail No.3 back to the tavern on a 3.6km loop into the woodlands. There was so much rubbish in the woodlands including a caravan, 2 tractors, car bodies and so many rusted tins. Also though we did find more greenhoods and many Pygmy orchids, which of course had finished flowering for the season.

Yet to fully open.

Making it back to the Triton we head off for Pallarup Nature Reserve or more exactly Pallarup Rocks, which usually bring the goods. We did find orchids but not many. Dark banded greenhoods and a solitary Hare orchid.

Well we pull into Raventhorpe at 4.45pm and set up the camper in the front yard of the unit our son, Tim, is renting. Was great to catch up with him, have a hot shower, play Tri-ominos and eat dinner indoors. We do however sleep in out camper so hot water bottles are again filled.

Tim leaves for work before 6am, as we hear him leave but remain in our warm bed until later. After breakfast we pack and and make tracks for home. We do stop in at Mills road but no orchids found, so Esperance here we come.

So now the question posed by the title to this post – Was a Jaunt in June Justified?