From our camp in Arrino we back track west then south to Hydraulic Road where we make our first stop of the day. Nothing found so we drive further east to a creek crossing then stop for another look. Wow there are so many Purple enamel orchids (Elythranthera brunonis) and then on the other side of the creek Deb finds some Cowslip orchids (Caladenia flava subsp. flava).

Named in honour of the famous naturalist Robert Brown

Underside of petals and sepals is spotted 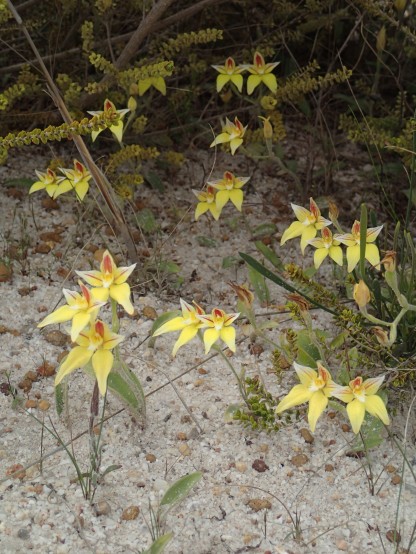 So back to Three Springs to fuel up and onwards through Carnamah to Bunjil. Turning south we travel through Latham and make a orchid hunting stop at Buntine Rock. (Mud Map N38) We park the Triton and make our way to the rock by foot. Lemon-scented sun orchids (Thelymitra antennifera) are the first to be found , quickly followed by many small Donkey orchids. They appear to be Pale donkey orchids (Diuris sp. ‘mid-north’) as they are very pale in colour and small in size. 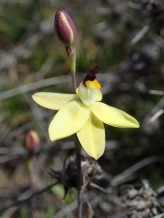 Small flowered, but these where extra small. My index finger tip. 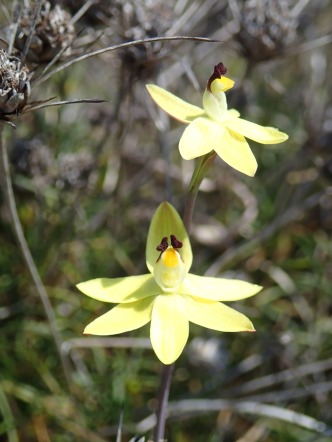 Up to 4 lemon-scented, lemon-yellow flowers

Other donkey orchids found that I am unable to name. They did not fit the description given to the two species that are recorded from around these parts.

Confusing aspects such as : More colourful;  lateral sepals that hang rather than being reflexed; reflexed or upright petals; upright dorsal sepal. Pictures posted as evidence of these variations.

Crossed lateral sepals but not reflexed

Our next orchid hunting stop was at Miamoon Reserve (Mud Map N40), which is southwest of Wubin. We walked around this flat granite outcrop which still had some wet areas which allowed us to find a new species for this trip. First up though were more donkey orchids which now appear to be Dainty donkey orchids (Diuris refracta), which flower late July to early September between Bindoon and Northampton. Also found were more Lemon-scented sun orchids. 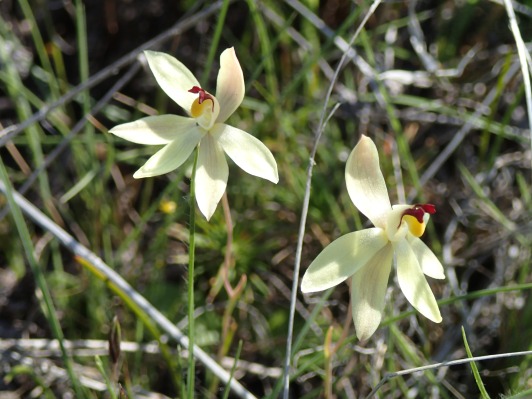 The new species found is Common bee orchid (Diuris decrementa) which flowers from late August to early November in an area from North of Perth to Esperance. We must be in the northern margins of its territory. 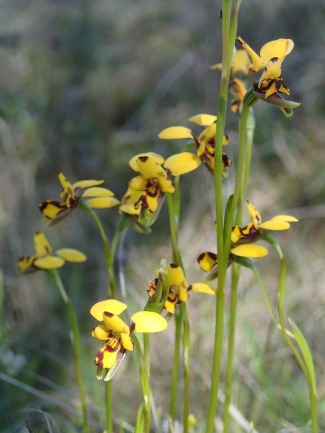 We then made tracks heading south through Dalwallinu and turning east at Pithara. Finally we turn south down Petrudor Rd and make camp at Petrudor Rock. Before the sun sets we go for a walk around the rock but find no orchids.

6 species flowering with 3 other s past their prime. Not too bad a day.