We wake to another beautiful spring morning, have breakfast , break camp and head south to Ballidu for morning tea. We check out the area where we found numerous orchids last year in August, however this time we only find some donkey orchids. As they have erect petals and broad, spreading lateral lobes to the labellum, I believe them to be Pale donkey orchids (Diuris sp. ‘mid-north’). 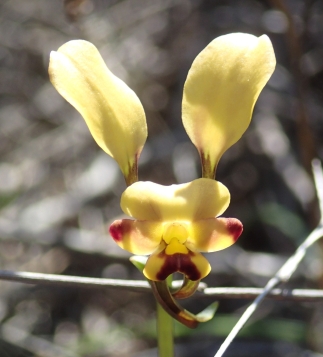 Further south we go turning east at Kondut, then travelling south again to Reynoldson Flora Reserve. No orchids found but an unusual grevillea was prolific. Prickly Toothbrushes (Grevillea armigera). Verticordia the flower this reserve is famous for was just starting to flower as well.

Easy to see where the common name comes from

One of the 11 varieties that flower in this reserve. Best October – November

We pop into Wongan Hills, buy some supplies, have a counter lunch at the pub then head up to the Wongan Wildflower Walk to see if we can be lucky with finding some orchids. Deb is the lucky one who finds some very small Frog greenhoods (Pterostylis sargentii)  growing under bushes. Last August we found many spider orchids under the same bushes. Not this year though.

Up to 6 green to dark brown, white banded flowers

Short, broad, cupped lateral sepals joined at the base 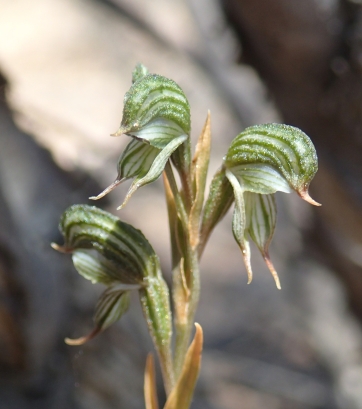 United dorsal sepal and petals forming a hood over the column 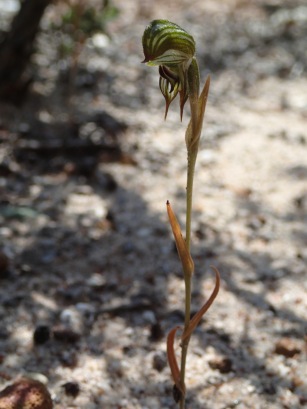 Further along the walk we find some Purple enamel orchids (Elythranthera brunonis)  and some donkey orchids. From their features I am naming these Common donkey orchid (Diuris corymbosa) as they flower August to October and range from Gingin to Bunbury. Our location is a little ways Northeast however Atlas of Living Australia has a recorded sighting near Wongan Hills. 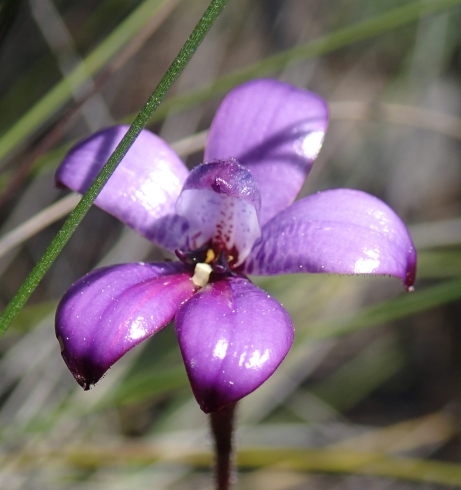 Further along we finally find something from the Caladenia family. Ant orchid (Caladenia roei) found under a prickle bush. Taking photos proved a challenge however we had to get a shot.  Next came patches of Cowslip orchids (Caladenia flava subsp. flava)

This one has crossed his legs. 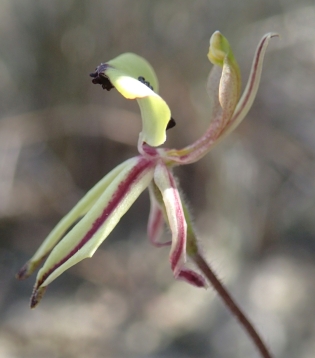 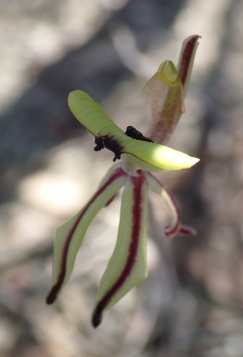 Then on the way back to the Triton we find more donkey and enamel orchids. 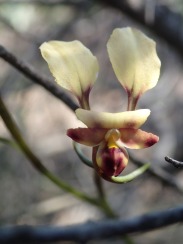 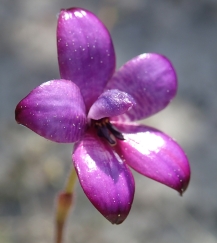 Leaving Wongan Hills we take the wrong turn which heads us south so we picked another route to take us back  north to Gathercole Nature Reserve. We spend the next 40 mins scouring over the granite outcrops looking for the elusive new find. More donkey orchids and Cowslips orchids were found plus a first for the day; (Prasophyllum gracile complex).  Unsure of exact species due to it being well past it’s prime. 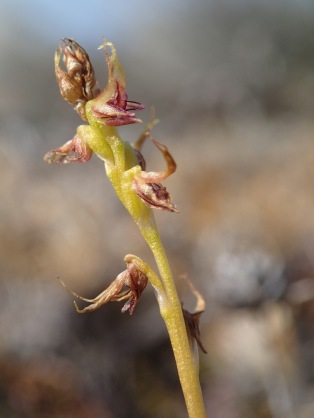 State of flower makes it difficult to distinguish exact species 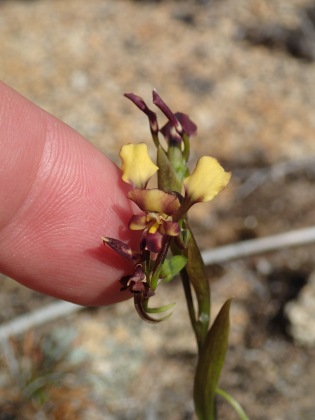 We then move North East to Dingo Rock Nature Reserve where further donkey and leek orchids are found. Exact species again not known which is a little disappointing, but we are no experts.

Appear to be Little laughing leek orchids but not 100% sure

We then made tracks East to Manmanning Nature Reserve, however no real place to pull over and as time was moving along we decided to travel south west to Oak Park picnic area to camp for the night. This little place has toilets facilities and picnic table and was situated on the banks of a creek that flows into Walyormourning Lake. A quick look around but nothing found.

6 named species found and others unable to be named. Not too bad a day. Here’s to tomorrow.