First day of July, 2nd month of winter and it will be 21 degrees, so what better way to spend a fine, sunny, winters day than to go exploring for orchids. After a yummy Bacon n Eggs cooked breaky, we pack up some lunch, snacks and drinks together with cameras, mobile phones, Hema map and orchid books and head off on our adventure.

We make a beeline for Boyatup Hill (Mud Map SE 40) with only one stop, a burnt out patch of roadside verge, where we struck out scoreless. Oh well Boyatup will not let us down, fingers crossed. On the track prior to the gravel pit I find the only orchid in flower. Lots of leaves yet to flower or spent bunny orchids were in abundance though. New find for the season a lone Robust snail orchid (Pterostylis dilatata) which flowers May to August from Geraldton to Israelite Bay. A distinctive feature of this orchid is the flowering plants lack a rosette of leaves, which is unusual for Snail orchids. 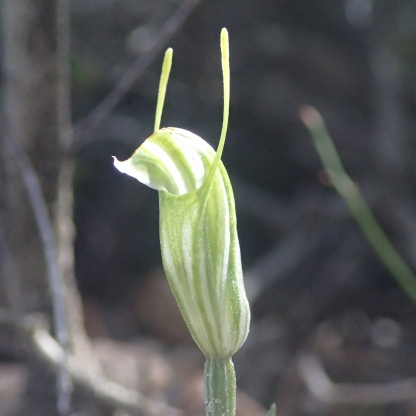 Deb then heads off on foot along the track and finds our first Donkey orchid of the season. Using  Esperance Wildflowers as a guide I believe the orchid to be Green Range donkey orchid (Diuris littoralis) which is found Denmark to Esperance flowering from July to early September. Florabase also list Local Government Area (LGA) of Dundas which is both north and east of the Esperance LGA so extends the listed location, seemingly including my location of Boyatup. 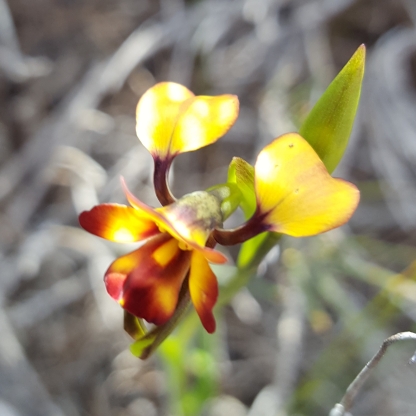 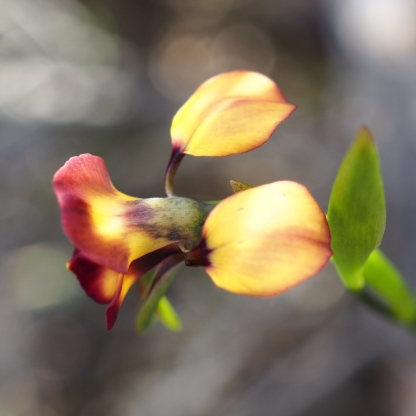 A little further along the track Deb also finds some Dark banded greenhoods (Pterostylis sanguinea). We need to lay on our bellies to get the photos as they are growing underneath a bush. Nothing more found so at the gravel pit Deb jumps back in the Triton and we make our way to the turn-around part of the track, where we grab a cuppa before heading further along the track ,both by foot, as it is rather overgrown and would scratch the Triton and be near impossible to find orchids looking out the windows.

Numerous stem leaves – up to 12 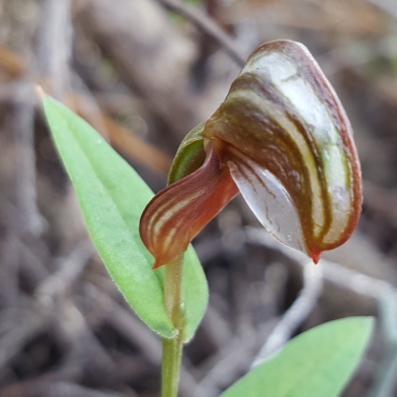 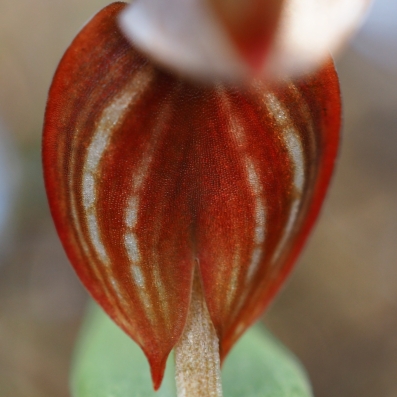 Flattened lateral sepals , joined at the base

In the area that we found many Mosquito orchids last year Deb is lucky enough to find a small group of Robust snail orchids. We did find Mosquito orchid leaves with a few mm of stem so a few weeks away yet. Also found leaves of Caladenia, Blue beards and Rattlebeaks, but no further orchids in flower. We make our way to the Triton and head off. 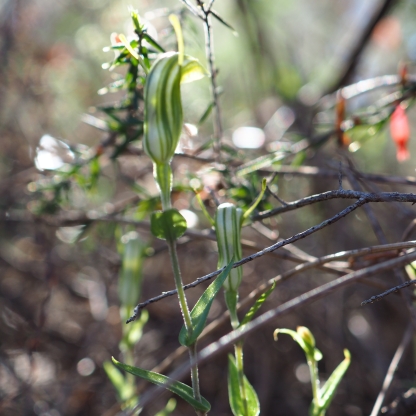 Grouping of 5 or 6 flowers 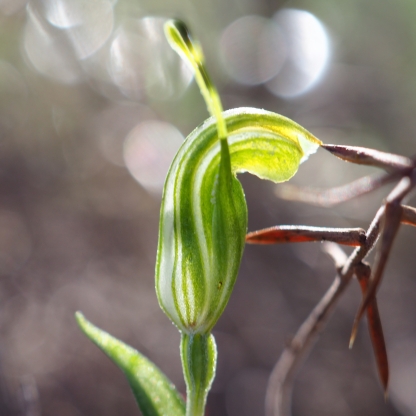 Using Google maps I had worked out a route to Mount Ney our next planned destination. We turned into a track we had previously been successful in finding orchids, which is in fact a named road. Bebenorin Road runs from Fisheries Road to Muntz Road, however calling this overgrown and unused track a road, is stretching the definition of Road. Only found some Hare orchids (Leporella fimbriata) well passed their best.

Also called Fringed hare orchid due to the labellum

At the junction of Shao Lu Road we park up and enjoy our hot Pea n Ham soup, whilst checking the surrounding scrub for orchids. Nothing found flowering which seems to be the narrative of the day. The overgrown track though has now improved to be a gravel road so onwards to Muntz Nature Reserve. Well the track into the gravel pit was very washed out so we turned around and no luck with orchids here either.

We move on down Muntz Road to Howick Road and travel westwards to Mount Ney Nature Reserve. This time we decided to take the track around to the West side of the park for the track into the rock. This is another overgrown track, with some deep wheel ruts. It actually extended onto the lower parts of the rock itself. We did not venture onto the rock in the Triton, as the environment of granite rocks is so delicate, so we reversed back to a place we could turn back and parked up. From here we headed onto the rock by foot and enjoyed our time exploring. 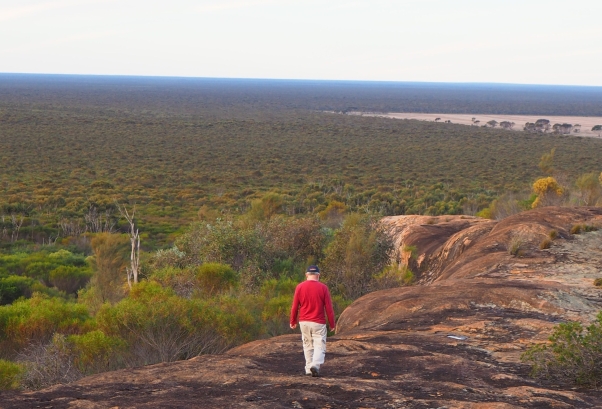 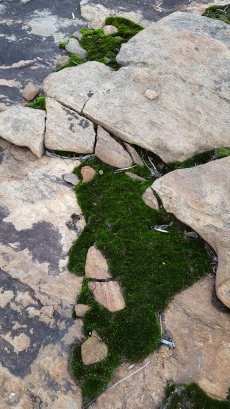 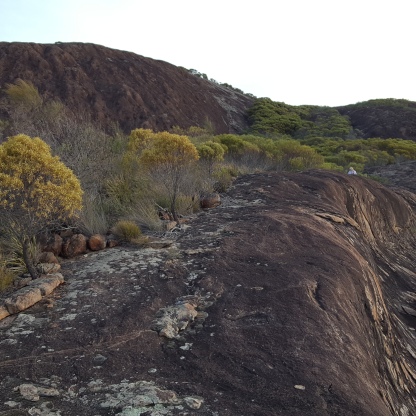 Deb way off in the distance

We found so many Diuris leaves, yet to flower which ended the day with a feeling of frustration. It has been dry out this way, so the season is much later than last year. During winter last year we found many more orchid varieties in the locations visited today. Oh well that is nature for you. Unpredictable.