You could not ask for a better morning. Bright sunshine and beautiful blue sky. What better way to start the day than bacon and eggs on Deb’s campfire baked bread.

We head South from the campground and skirt around north of Peak Eleanora towards Dog Rock. This track provided us one last reminder of the Holland Track – Bog holes. Rather than continue to Dog Rock we turn North at the first intersection and travel up to Lake King – Norseman Road. After travelling due West north-west for a while we reach a sharp turn to the South south-west. At this turning, we stop at Ninety Mile Tank, which was once covered by a tin roof but is now in need of some tender loving care.

You would not have known we were on a gazetted road as the state of it was atrocious. Well in the Shire of Esperance it was very poor but upon crossing the shire boundary into Shire of Ravensthorpe it improved greatly. Onwards through Frank Hann National Park to Lake King. We called into the tavern for a counter meal. After a feed and a beer it was time to say goodbye to Richard who is heading home to Port Kennedy.

We however have one last orchid patch to visit before we head home. Pallarup Nature Reserve is one of our favourite spots. Just like Helms Arboretum it rarely disappoints. Turning off the Newdegate-Ravensthorpe Road into Pallarup Rocks, Debbie immediately spots a Jug orchid (Pterostylis recurva) which we haven’t seen since day 4 of this Road Trip. Close by a double-headed Frog greenhood (Pterostylis sargentii) was found.

Since I am out of the Triton I decide to walk the rest of the way to the parking area whilst Deb slowly drives in. I am busy taking a photo of a Sugar orchid (Ericksonella saccharata) when Deb heads off into the bush, south of the track. She has seen many orchids in an area we have never checked out before. She is not wrong. Only a short way in I find a trio of Cream spider orchids (Caladenia horistes) which flowers August to early October in a range from Fitzgerald River National Park to Balladonia. The spreading petals and lateral sepals and relatively large labellum are tell-tale signs, even though the sepals are light cream in colour.

However what Deb had found was many Pink candy orchids (Caladenia hirta subsp. rosea). I stumble across a light pink version and a Dark banded greenhood (Pterostylis sanguinea), the first in a while as well. 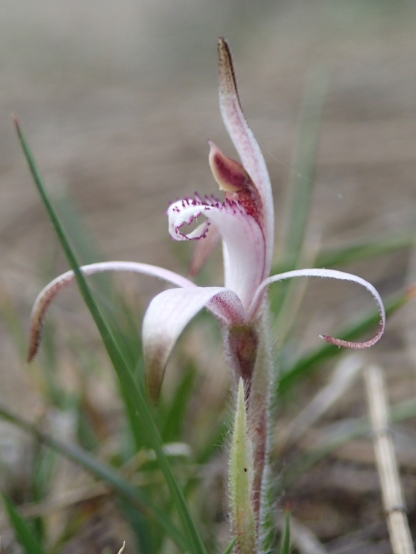 Then some other spider orchids comes into view. These are much more yellow in colour and confirm this as a location of Cream spider orchids. 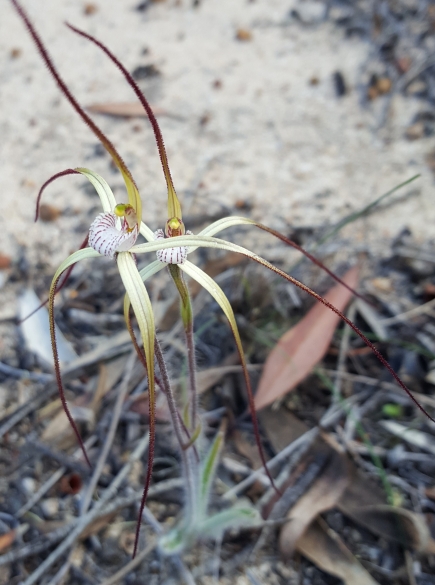 Finally get to where Debbie has discovered her bright pink candy orchids. They are beautiful. 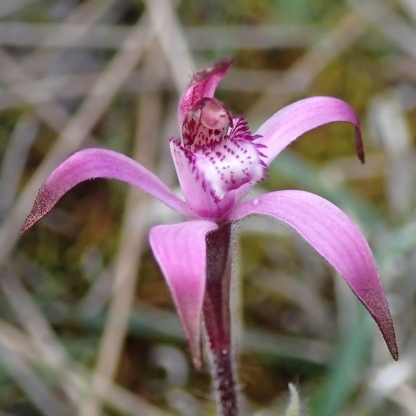 Very close by were some Blue beards (Pheladenia deformis). So many different colours found so far – Green, white, cream, pink, blue and brown.

Making our way to the tank track we stumble across a great little patch of Western wispy spider orchids (Caladenia microchila) which are distinguished by their stiffly held petals and sepals. The petals backswept and elevated with the tails sometimes drooping.

First orchids found on the track to the tank were some donkey orchids. Location leads me to name these Yellow granite donkey orchids (Diuris hazeliae) however they could be Green Range donkey orchids as we are less than 100kms or so from the coast.

Another spider orchid comes into view. This double-headed beauty appears to be the Common spider orchid (Caladenia vulgata) due to the long fine glandular tail filaments and backswept, slightly elevated petals. These are the most widely spread of the wispy spider orchids being found between Kalbarri and Esperance. Also a long flowering period from July to mid-October. 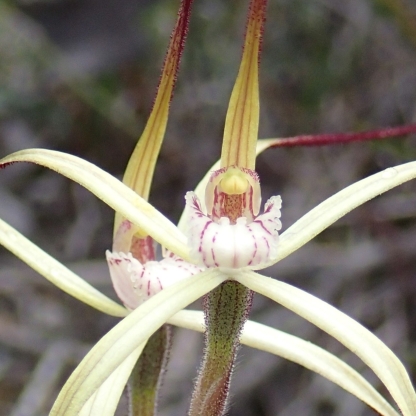 The a completely different spider orchid is found, which I am unable to identify. It is a Caladenia hybrid, however the parentage alludes me. One parent must come from the Roei complex whilst the other is likely from the Filamentosa complex. Refer the post “Caladenia” for details of these complexes. 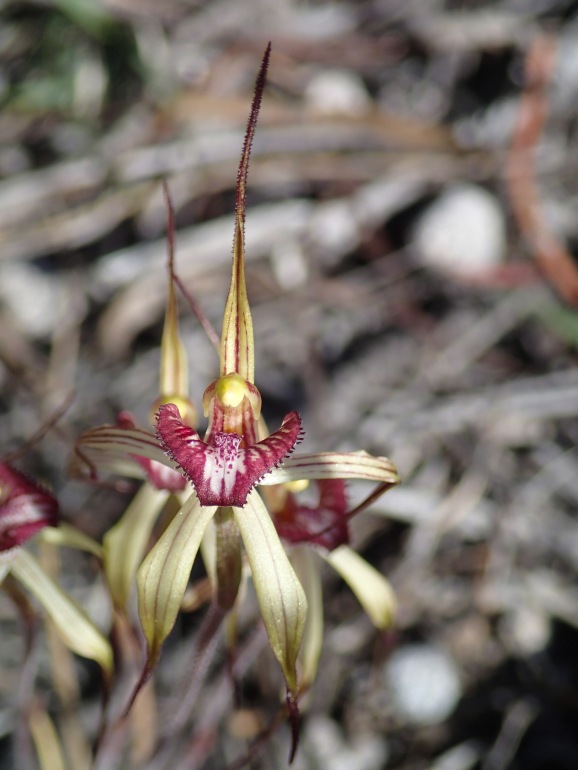 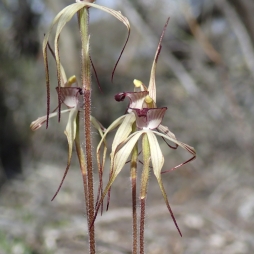 Then nearby I stumble across a Hypochromic colour form of a spider orchid. This colour form can also be referred to as Lutea. This is a genetic mutation which blocks the stronger colours like reds, blues and purples thus allowing the underlying pigments to show through. These are the whites, greens and paler yellows. Exact species not known. However the lack of colours provides a very unique looking orchid. 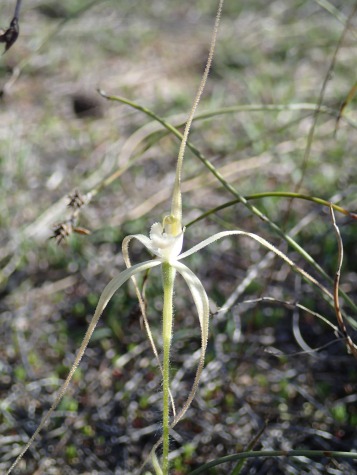 Pale yellow and white colouring only

At the base of a tree we found another couple of Western wispy spider orchids, with one double-header and one that did not mature. The backdrop of the trees bark made for a great photo.

Debbie then calls out as she has found a different spider orchid.  This one is not from the Wispy spider orchid complex. It is all by itself but appears to be a Stark-white spider orchid (Caladenia longicauda subsp. eminens) which is said to be of clumping habit. The location and size of the labellum and fringe segments allude to this classification. These beautiful orchids flower August to early October in an area from Moora to Esperance. Close by more specimens were found including a clump of 5 plants .

Grows up to 60cm in height 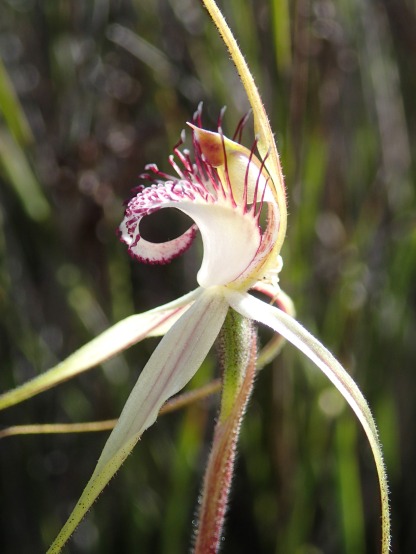 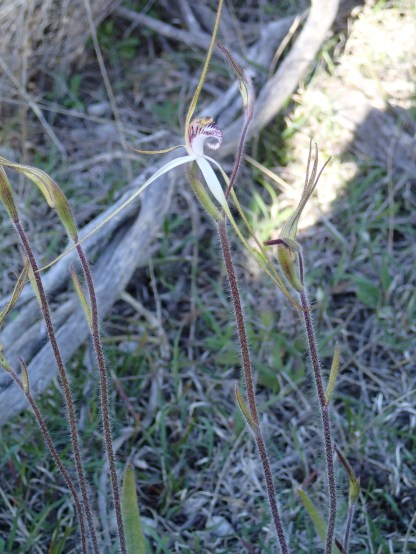 It’s now 3pm so we move further along the track towards the rock. Leaning over in plain sight is a large triple-headed  Jug orchid. Then we reach the rock and I quickly check in the mossy undergrowth to see what is there. I find more Pink candy orchids and Sugar orchids. 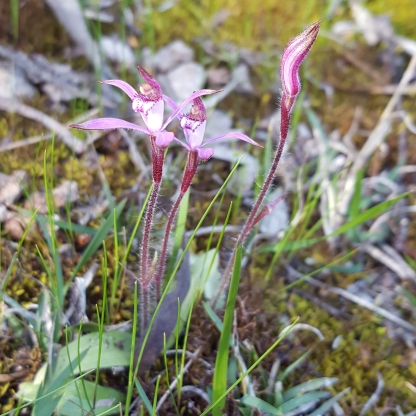 Growing in the moss 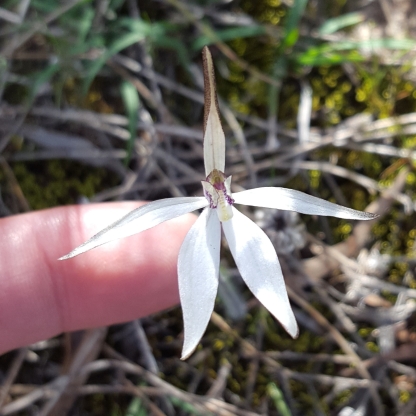 Also found were some small green orchids from the Roei complex. One was yet to open however, so I have to try to classify from the one in flower. It has small clubbed lateral sepals so must be a Short-sepaled spider orchid (Caladenia brevisura) which are found from Ravensthorpe to Israelite Bay during the months of August and September.  It was not immediately recognised due to the lack of reddish colouring to sepals and labellum. 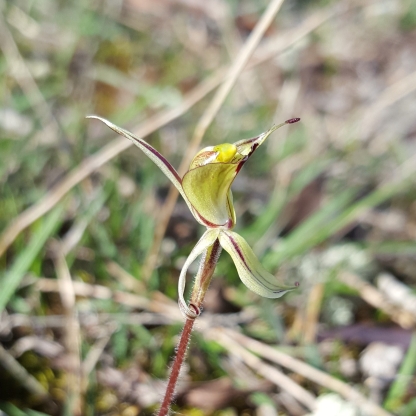 Yet to fully open

So now time to venture onto the rock itself. Hang on, check out that great clumping of spider orchids. Appears to be a group of Common spider orchids. 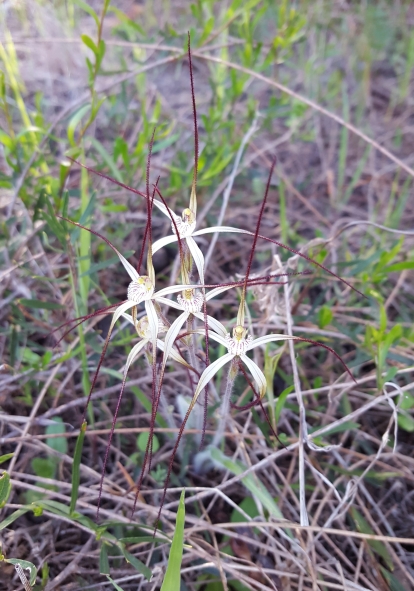 Dark filaments to the petals and sepals

Finally moved on the rock proper and first orchids found were some small donkey orchids. From appearances it appears we have found two different species. The bright yellow ones with dark markings would be the Yellow granite donkey orchid whilst the pale yellow with brownish markings appear to be the Western wheatbelt donkey orchid (Diuris brachyscapa). The western wheatbelt donkeys are described as generally short habit with smallish pale yellow, brown marked flowers. They flower July thru September in an area bounded by York , Tenterden and Ravensthorpe. 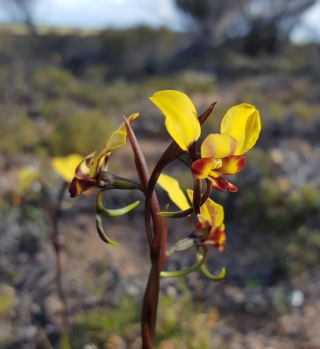 Up to seven flowers per orchid 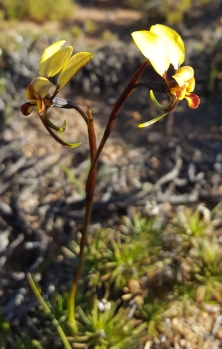 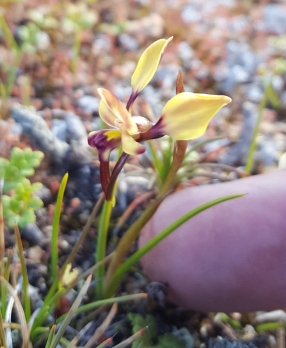 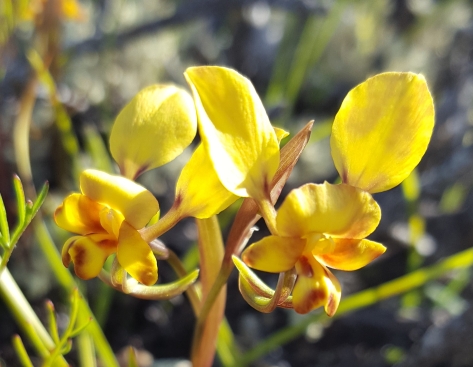 On reaching the fence that borders the northern boundary of the rock we come across some more Bluebeards and then the one and only Cowslip orchid (Caladenia flava subsp. flava)  is found. further down the rock we also discover another double-headed Sugar orchid.

Then finally in the scrub leading from the rock to the gazebo we find another orchid. This time it is the Ant orchid (Caladenia roei) with its distinctive smooth green labellum with dark apex. One orchid was found intermingled with another Pink candy orchid. 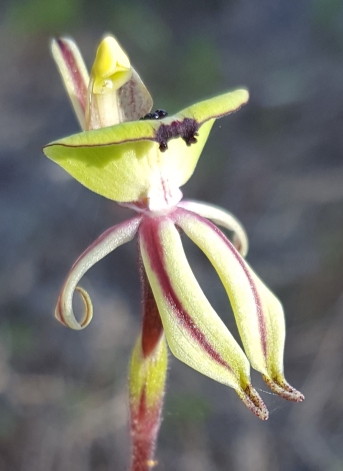 We still have over 2hrs of driving to get home, so it is time to leave our Orchid hunting, but what a day it has been. 15 species found, plus 1 hybrid caladenia and 1 hypochromic caladenia. As previously mentioned, Pallarup Rock rarely disappoints and today was exceptional.

It was an epic effort by Debbie and Richard who drove the entire Holland Track from Broomehill Village to Coolgardie. Then to visit our favourite granite outcrop,Peak Charles plus a new granite outcrop of Cave Hill, just put the icing on the cake.