Mid morning we head off along Fisheries Road east to Boyatup. Our first point of call is a gravel pit just past where the bitumen runs out. After driving slowly in and checking the spot where we found Redbeaks last year, we come up empty, with nothing worthy found. So we head back to Boyatup Hill ( Mud Map SE 40 ) and head in on the track. First find is a Donkey Orchid which has something foreign stuck on it’s labellum, while his stem mate has his labellum nibbled off a bit. Green Range donkey orchid (Diuris sp. ‘Green Range’). 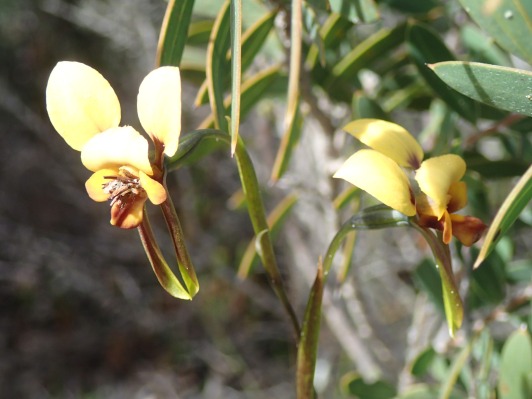 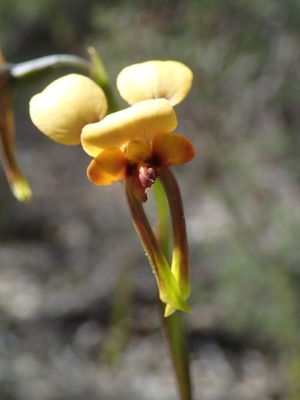 Labellum with a foreign object wedged in

Further along the track Deb spots the first Spider orchid, so we park up and have a good look around. Western wispy spider orchid (Caladenia microchila)  is the only species I am certain of that is included in our finds, however they would all belong to the Filamentosa complex.

Size comparison to a 50c coin 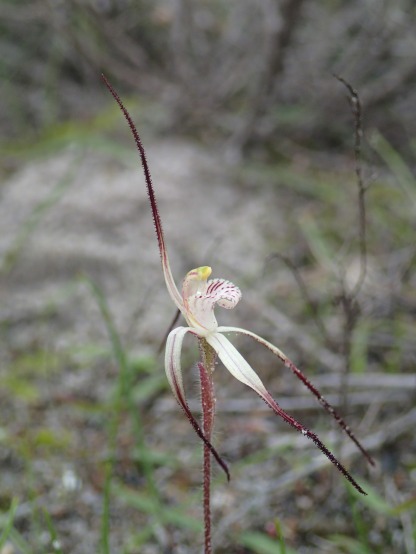 Another profile for comparison 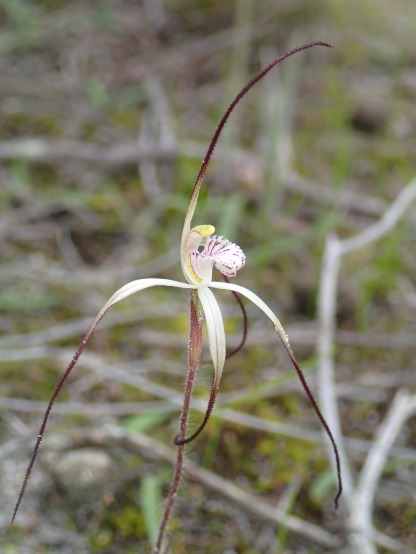 Whilst I am on the ground taking photos Deb yells with excitement. She has found the first King Spider orchid of this season, in full flower. Only the one, but a great find. Esperance king spider orchid (Caladenia decora) 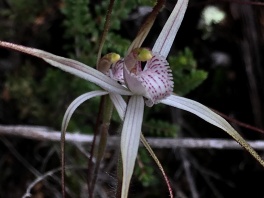 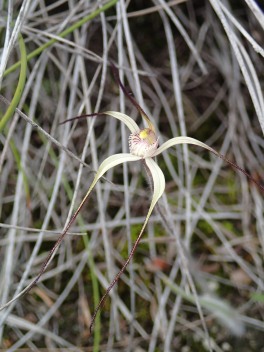 Showing the roughness of the petals and sepals 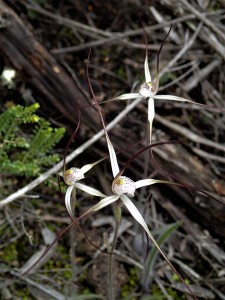 Only found in 3s never more 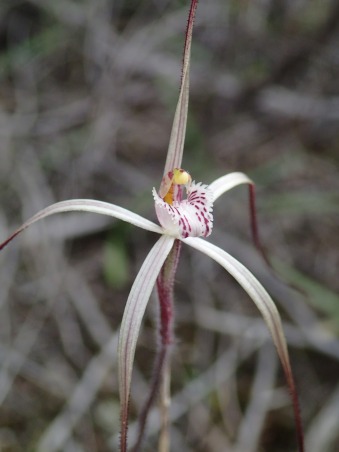 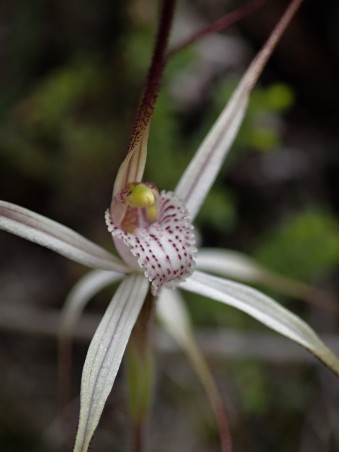 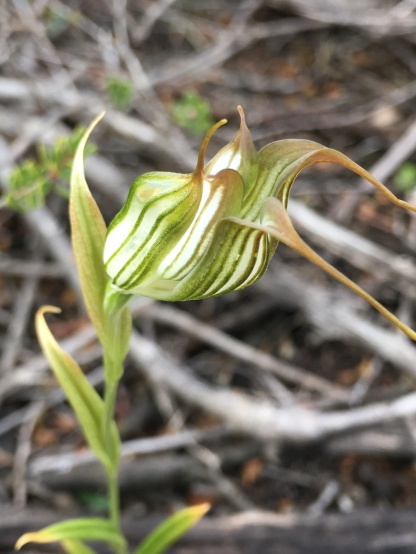 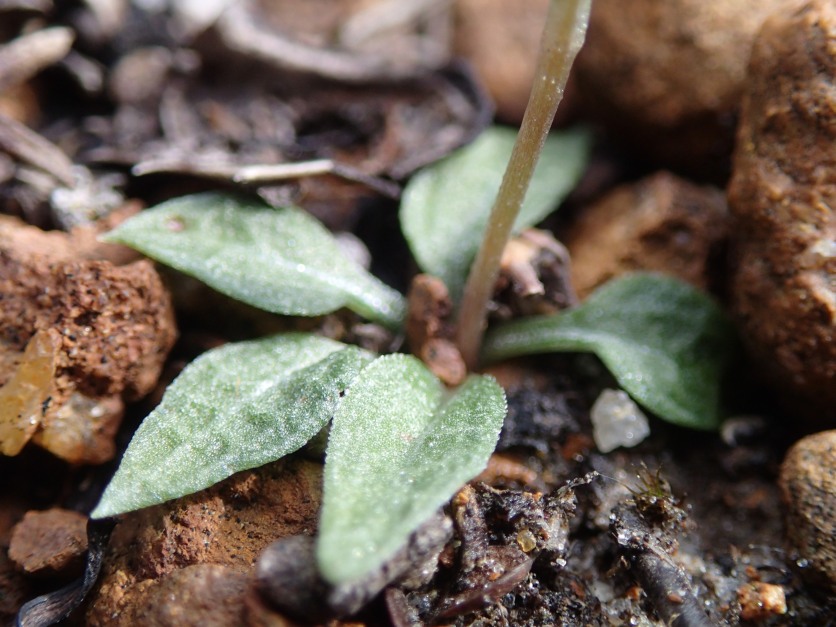 Then a patch of blue grabs our attention. A Blue beard (Pheladenia deformis) which appears to be double headed, however two very close stems prove this to be two individuals flowers.

Back to back flowers

appears to be double headed flower ..not so 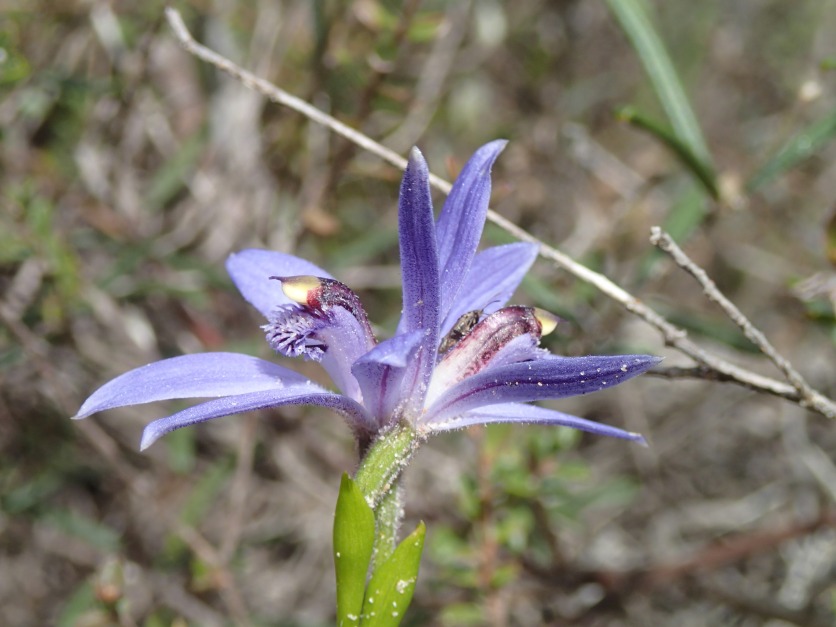 This is how we get our photos. Very close to the subject. Wind and shadows can be tricky

Shot of a Blue Beard 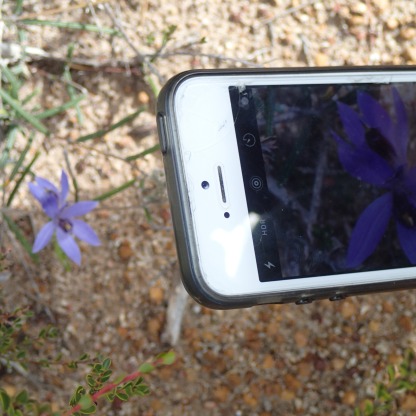 The track is getting a bit overgrown so Deb parks the Triton up and whilst waiting for me, who is walking the track, she finds some Mosquito orchids (Cyrtostylis robusta) . A bite to eat then we both set off on foot towards Boyatup Hill.

First finding is another Jug orchid which is nearly fully opened, followed by some more Mosquito orchids and then a Robust snail orchid (Pterostylis dilatata). 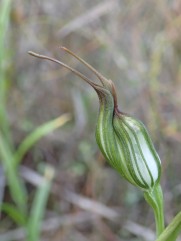 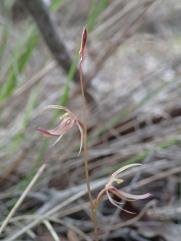 Triplet yet to be born

Further along more Jugs, Mosquitoes growing in the median strip of the track and Blue beards in a wet mossy area.

One open , waiting for his twin

We then break out from woodlands into open health and find some more donkey orchids and a patch of snails Fawn snail orchid (Pterostylis parva) again in the median strip of the track. Also a lone Hare orchid (Leporella fimbriata) and some more Spider orchids are found.

Enjoying a brief spot of sunlight 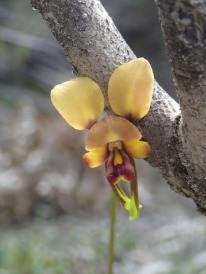 Pushing up into a branch 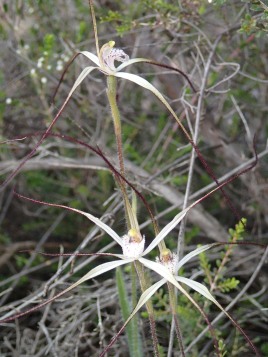 We now keep trekking along and start skirting the hill looking for a way up as the rocks look very steep from this side. Unfortunately the track runs out so we bash our way through and scramble onto the rock only to be driven back by a bees nest. So we push around the base of the rock and cross over a vegetated gully, where we find some Banded greenhoods (Pterostylis vittata),  to finally get on the rock. 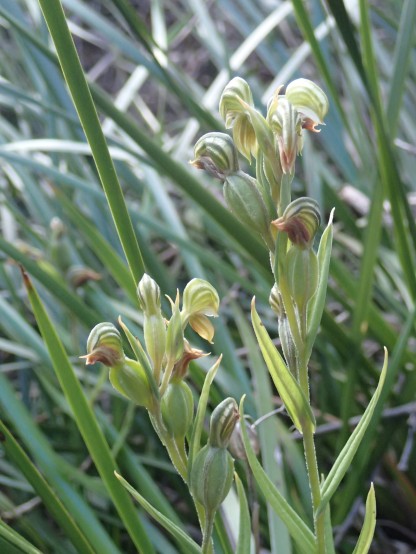 Appear to have been fertilised

After looking around the rock we make our way to the side where our bush track is and Deb finds a likely way down. No orchids were found on the rock which was disappointing however the views are amazing. We made the way down the rocks on our backsides as it was very steep and slippery. Safely on the ground we now bash through the bush and find the track back to the Triton. More photos of Spiders, Snails and Blue Beard orchids taken on the walk back along the track.

View from the rock towards the track leading in 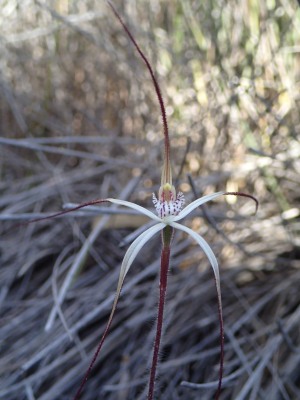 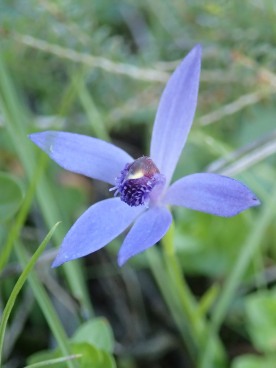 Arrived back at the Triton and had a cuppa then decided it was time to head home as it is getting on to 4pm. We get back onto Fisheries Rd and head west, when we decide to check out the track just before the line of pine trees. This  patch was shared with us by Deb Witt, a fellow orchid and nature lover. A short way in we pull over for a look but nothing grabs our attention. I decide to walk ahead whilst Deb continues her search on the opposite side of the track. Only found a few rosettes before I see a flower that looks orchid like so I check it out.. WooHoo it is a Dancing spider orchid (Caladenia discoidea). 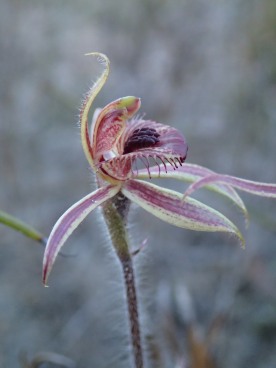 The further along we go the more we find, however some look at little different with longer sepals and colour variations. Hybrids??? It is now getting late so we turn around and on the way back we even find some Wispy Spider orchids. Then low and behold a solitary Donkey orchid. Being 5pm the light is fading fast so last photos taken with flash.

Flash again due to fading light

Taken with flash as the light was fading fast 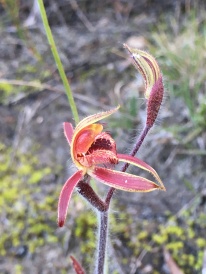 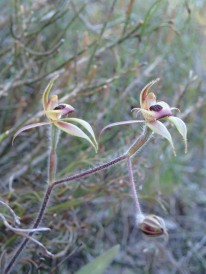 Appears to be waiting for his sibling to bloom

Side view of possible hybrid 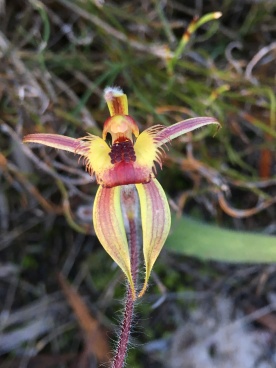 Very long sepals which hang down a brighter colouring

Boyatup Hill lives up to the reputation of my Mud Map reference book as we found: