Well after a wet night we awake to a windy and overcast day. So we have breakfast and pack up some damp campers, but not before I have a very quick scout for any orchids that may be around. Guess what? I found a patch of Mallee banded greenhoods (Pterostylis arbuscula) which are a recently named species. Common name “Mallee” is yet to be confirmed. 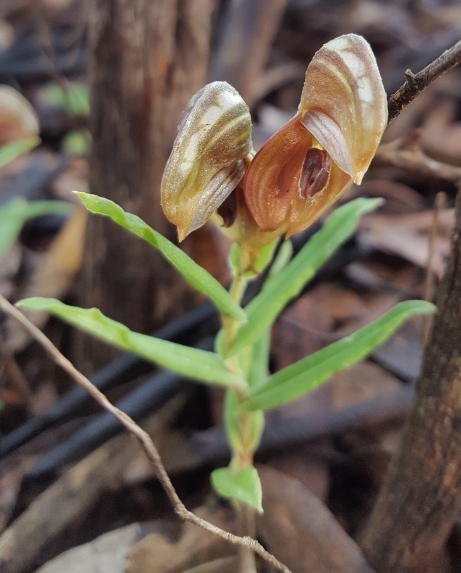 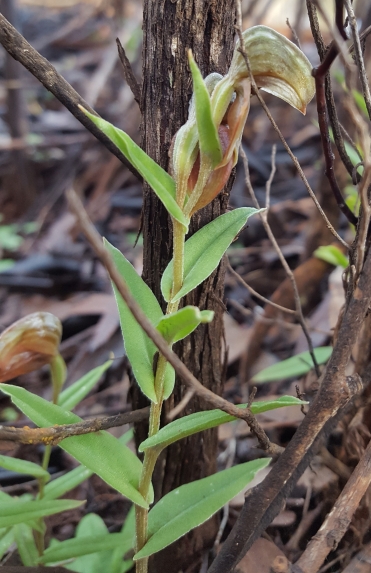 Named from specimens collected along the Hyden-Lake King Road.

As the track had become a boggy mess after last nights rain we sneak out of our camping spot using a recently pushed through “chicken track”, so called as you bypass the gnarly parts of the track. A little way along, but a few hours into the drive (9.50am), we get out of the Tritons to check out a particularly challenging bog hole, when I spy something small and bright green in the drab understory of the surrounding woodland. It is a small Midget greenhood (Pterostylis mutica) which upon closer inspection has neighbours. 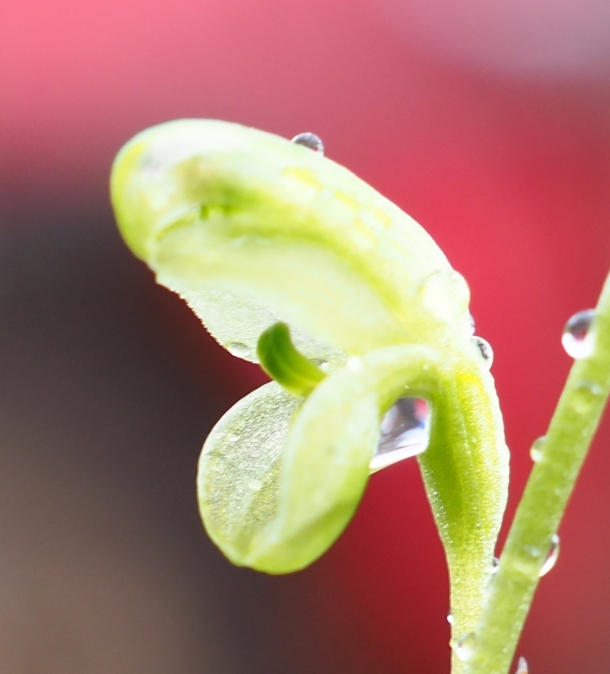 Photo displayed to show the labellum

Standing up to 350mm in height 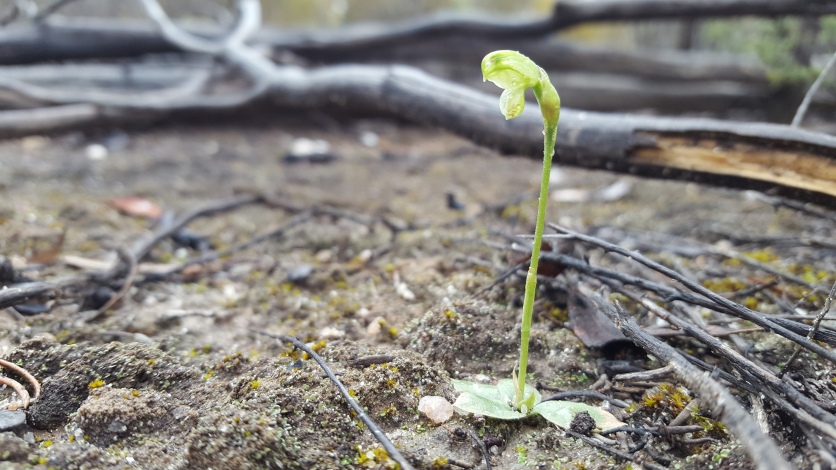 This little guy grabbed my eye from 2 metres away

Also nearby were some Hairy-stemmed snail orchids (Pterostylis sp. ‘inland’) which are found inland to Kalgoorlie on a line from Kalbarri to Balladonia.

Lateral sepals can be up th 35mm in length 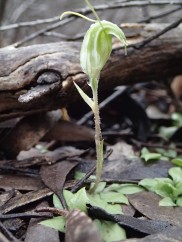 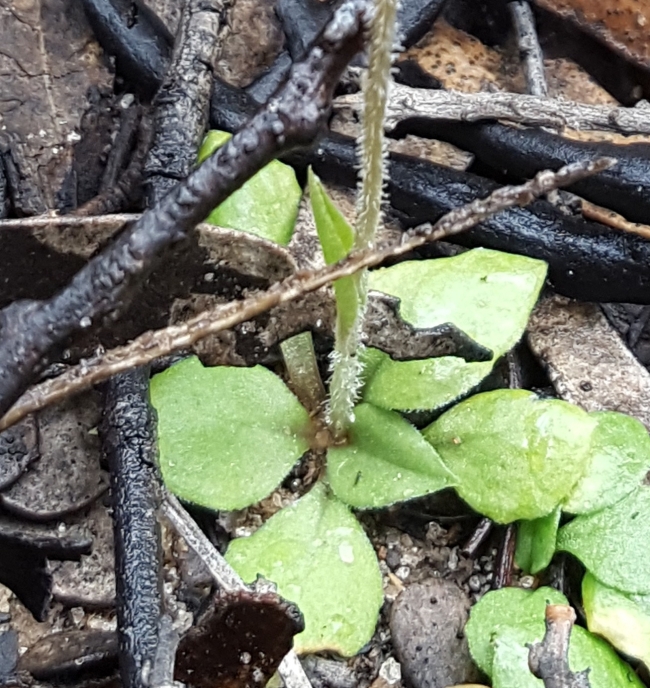 We move on and finally reach the Southern Cross – Forrestania Road intersection, which is 18.02km from Wattle Rocks. It was a long tough stretch of the track but we have made it to Mount Holland, where after much deliberation we have decided to camp for the night. After about 1/2 an hour we have set up camp and started collecting fire wood but before we have lunch we decide to climb up the so called Mount. No orchids found on the climb up, but on the lee side of the hills summit some small orchids are found. 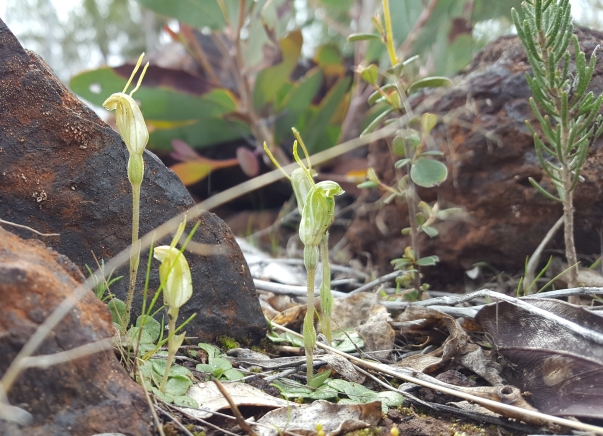 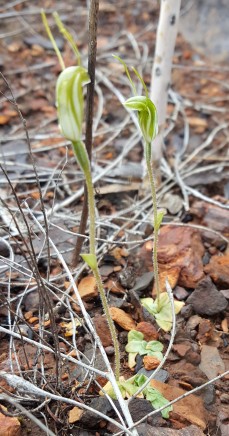 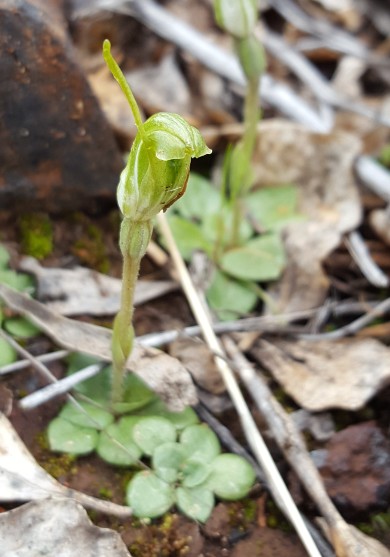 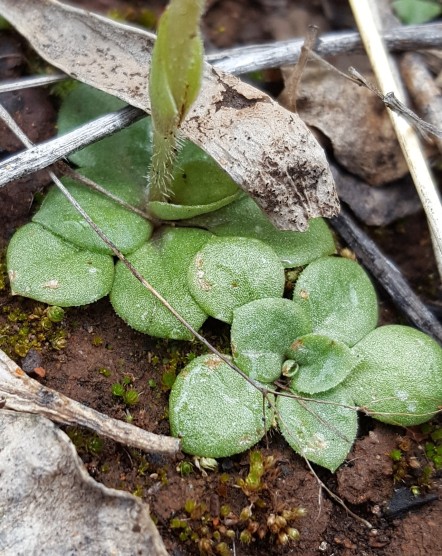 Close-up of rosette with what appears to be hairy margins 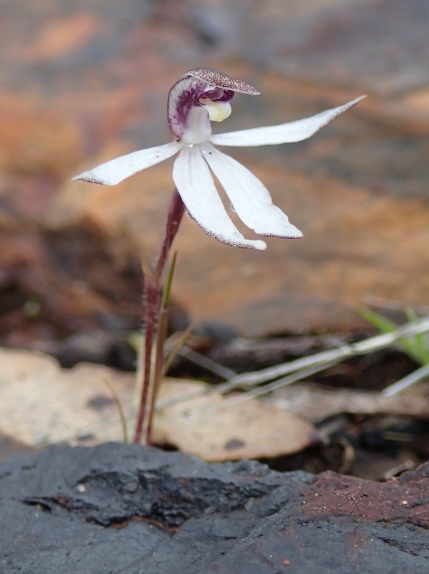 Purple haired ??? in a white jumpsuit 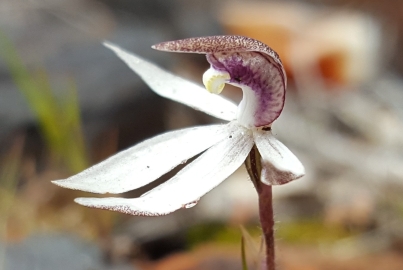 Dorsal sepal not yet erect 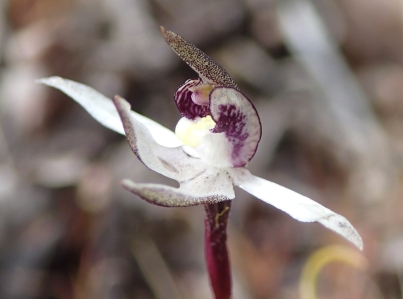 Seems to be dancing

Making our way back down the Mt we cross the vehicle track and come towards the camping ground from the East. Debbie finds a lone Midget greenhood with a Mallee banded greenhood as a neighbour. 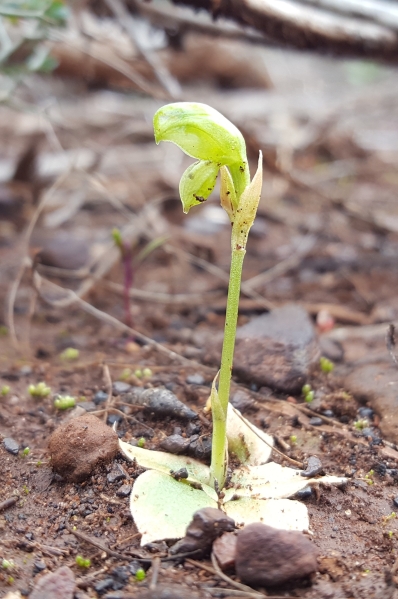 Small but bright green against the other foliage 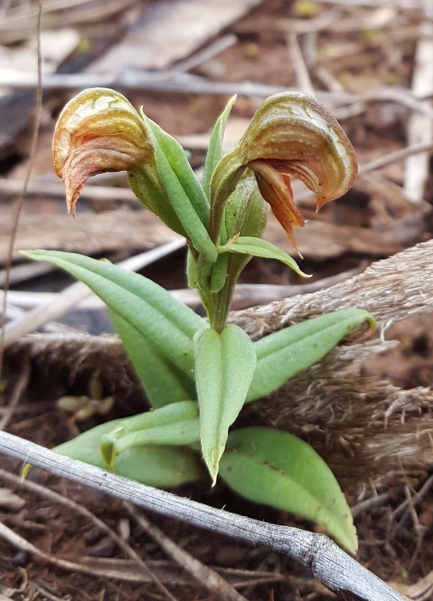 Back to camp for lunch, then afterwards Richard takes his Metal Detector for a spin, I go for another explore whilst Deb get organised for dinner, which is cooked over the campfire. After we hit the sack the heavens open up and we have a wet night to content with. Toilet breaks in the rain are not fun….