Another beautiful morning, so what better way to start than to go orchid hunting. We all make tracks for Emu Rock as it was too dark yesterday to check it thoroughly. First find for me was a rare double-headed Sugar orchid (Ericksonella saccharata) whilst Deb was checking out the small Hairy-stemmed snail orchids (Pterostylis sp. ‘inland’) I had found yesterday. 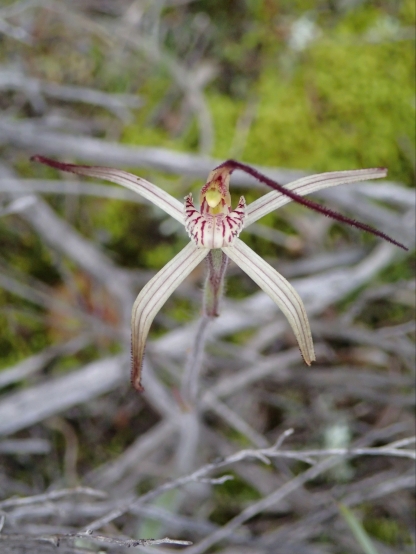 Whilst taking Deb and Richard back to the Chameleon spider orchids I found yesterday other orchids were found. Mallee Banded Greenhood (Pterostylis arbuscula), Hairy-stemmed snail orchids and  Sugar orchids. 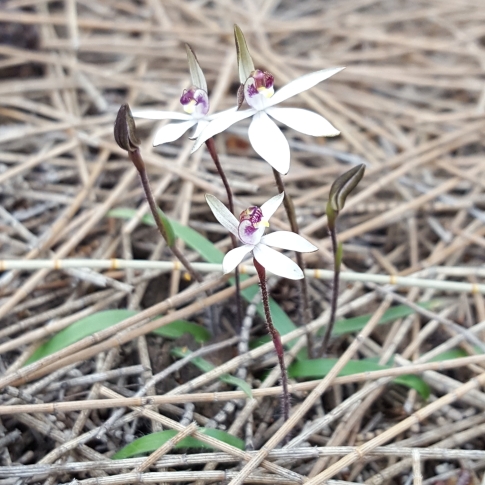 Further shots taken of the Chameleon spiders then on the way back to the Tritons, I found another double header Sugar orchid. 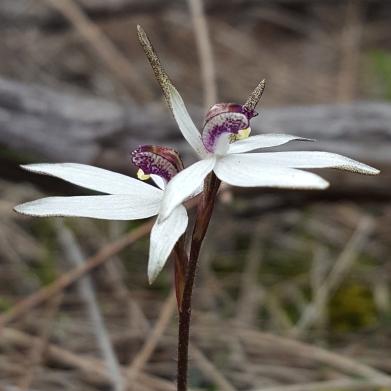 Time to continue our trek along the Holland Track. We make our way north back to the Hyden – Norseman Road where we start the official Holland Track to Coolgardie. What lies ahead is unknown !!!!!

Hyden – Norseman Road – Our Starting point of the Track proper

Following the trip notes our first stop will be Sheoak Rock just off the track at the 12.53km mark. However after around 10kms we pull over as Deb has spied a Frog greenhood (Pterostylis sargentii). Whilst I was taking photos she also finds a Sugar orchid  nearby.

Thin pointed stem leaves. Up to 10 in number

We move on to Sheoak rock which is a few hundred metres North of the track proper. It was wet and muddy however we park up an go for a wander. On the high point of the rock was a Trig Station (Triangulation/Trigonometrical) made of metal which is nice piece of history. Whilst getting some photos it started to rain so we made our way back to the Tritons for shelter. Making our way out of Sheoak Rock I cross through a patch of bush and come across some Sugar orchids. 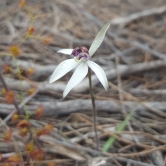 Growing near a burnt out log. Around 7 or 8 in flower closeby

Back on the track we pass a Telecom Tower (reception still) at the 15.25km point and reach Native Rocks at the 15.69km point where we park up for lunch. Whilst Deb and Richard put the kettle on and rustle up some grub I go for a scout. First off is another Sugar orchid but then I stumble across a very tall Frog greenhood growing out in the open on granite.

Standing a good 200mm in height

So far the most plentiful orchid on the Holland Track

Growing in a very exposed area on granite

After a quick bite to eat I check the other side of the track where I find spider orchids yet to open.. Oh bugger we may be too early !!!!

However luck is on my side and I find some flowering.. Now the hard part getting a good photo then working out which species. From the looks they are possible Pendant spider orchids (Caladenia pendens subsp, pendens) due the size of the labellum and length of petals and sepals.

The sepals and petals have long, brown, drooping, thread-like tips.

Leaving Native Rocks we follow the trip notes for another 6.33km to our next stop of Wattle Rocks. We did get more puddles to cross on the way.

Parking up at Wattle Rocks Deb immediately spots some orchids. Some very small Dwarf zebra orchids (Caladenia pachychila) are on the edge of the track, in danger of getting run over or trampled. these little beauties flower July to September in a large inland range from Nerren Nerren Station and Mt Ragged. 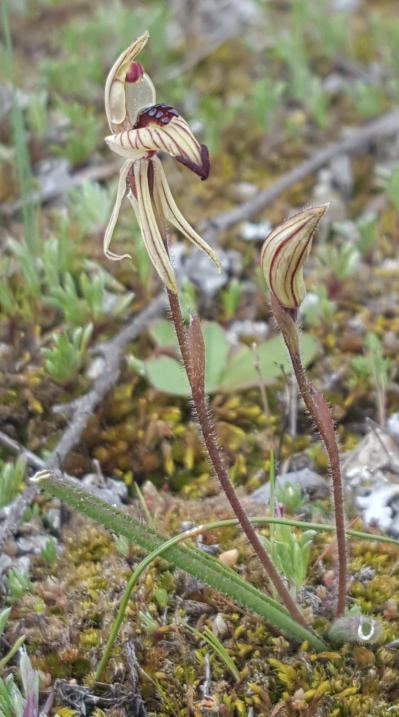 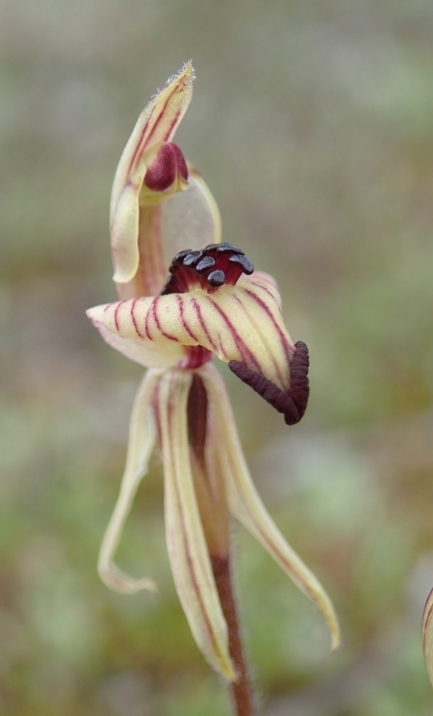 Then a few metres away there was the biggest clumping of Ant orchid (Caladenia roei) I have ever seen.  They were an amazing sight. 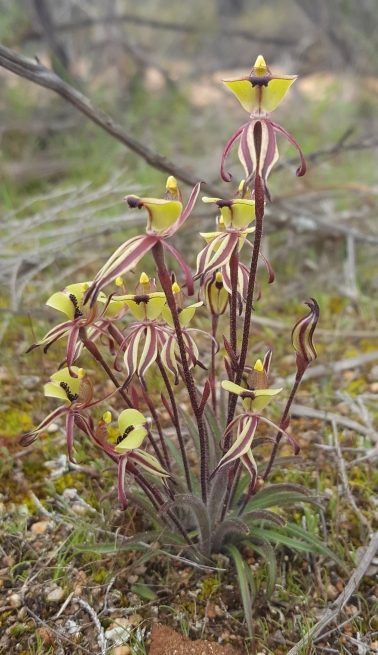 Not colony forming but can form clumps 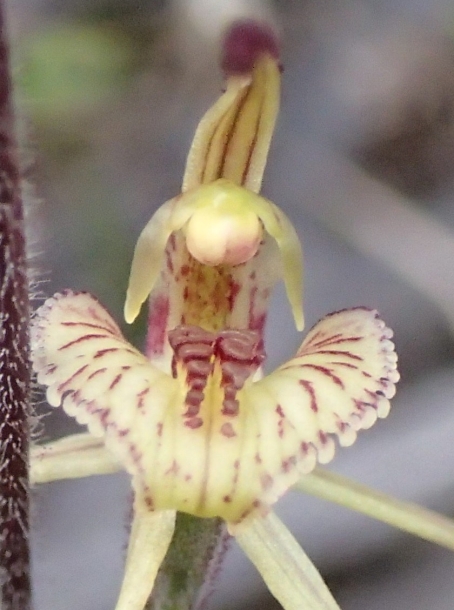 Labellum does not match any descriptions in my references

Another new orchid found, this time it appears to be a Drooping spider orchid (Caladenia radialis) which must be getting very close to it’s eastern extremity.

Other orchids found included Blue beard, Sugar orchid, Dwarf zebra orchid and the Western wispy spider orchid (Caladenia microchila) which is found between Kondinin and Madura during the months of July to early October. 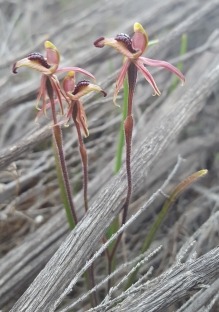 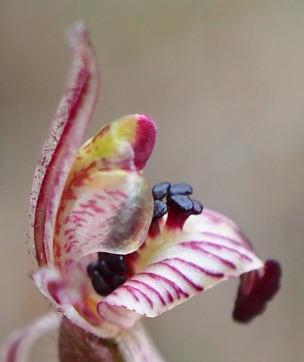 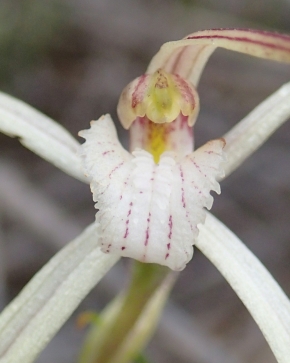 Eastern from has long pendulous petals and lateral sepals

What a great spot little spot this is, but we must move on. Next stop is 1.86km further along, at a Mallee fowl nest which appears to be in current use.

We had planned on getting to Mount Holland to camp but at our current travelling speed it will be dark before we get there, so we decide to look for a suitable camping spot along the way. We find a place just past a big slippery mud hole and set up camp. We light the obligatory camp fire and cook some dinner.

Getting ready to cook dinner

Luckily we chose to camp earlier as a massive thunderstorm hits and we rename our camping ground “The mud camp”, as the track is now a much muddier, wetter and more slippery than it was. Tomorrow will be interesting going. 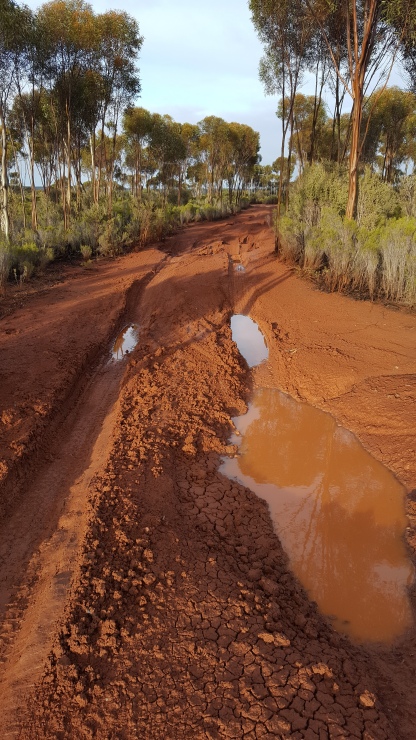 Was a successful orchid hunting day (12 species), but not so successful in travelling the distance we had planned. Achieved less than 30kms today as the Holland Track is proving more challenging than anticipated.