Waking up to a beautiful sunny morning, we eat breakfast around our campfire, pack up the campers then go exploring Dragon Rocks.

Close by the camp ground we stumble across some very small Blue beards (Pheladenia deformis). Solitary ones no clumps. 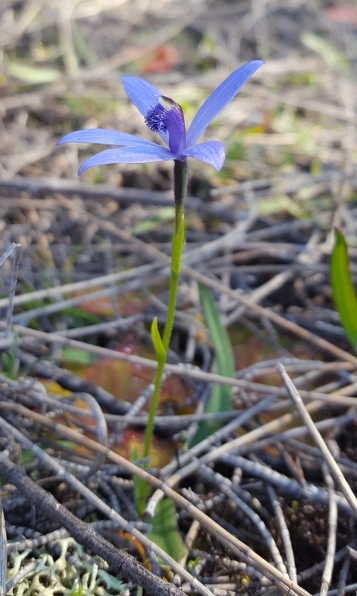 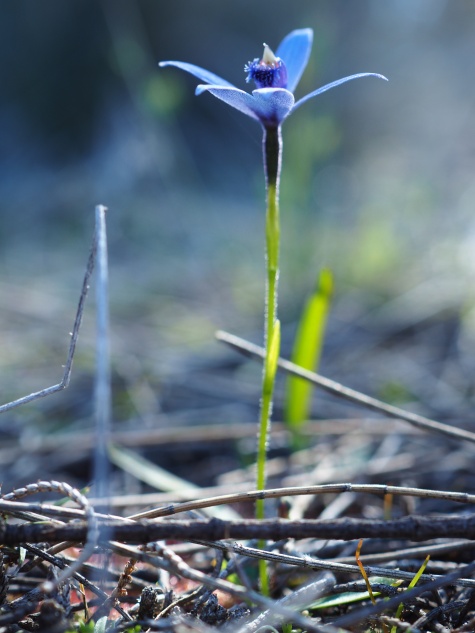 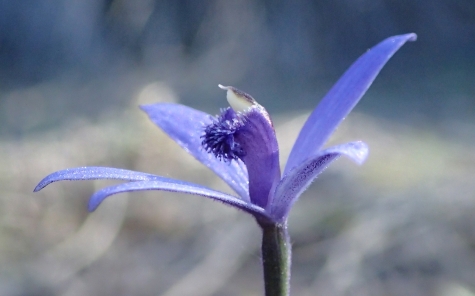 Moving north away from the granite rock I spied a patch of pink. On closer inspection a great bunch of Pink candy orchids (Caladenia hirta subsp. rosea), which flower late June to September in locations between Kalbarri and Israelite Bay, were found. One of the orchids had little colour with pink calli and fringe segments to labellum and yellow tips to petals and sepals. Known as Lutea form.

Stand up to 250mm in height 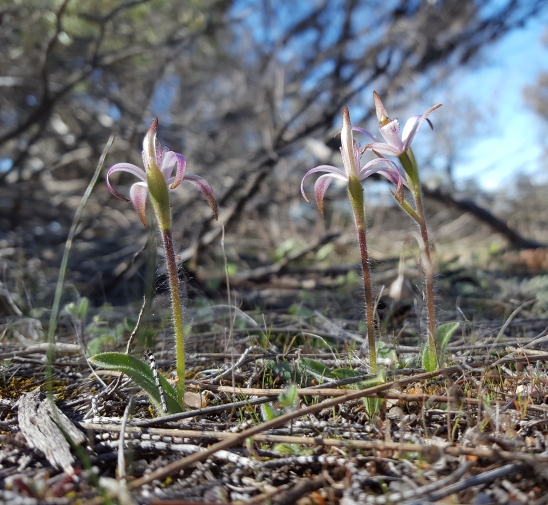 Also found nearby were Sugar orchids (Ericksonella saccharata) and some wispy spider orchids. The first orchid appears to be the Common spider orchid (Caladenia vulgata) due to its thin leaf and long fine glandular tail filaments. A wide ranging orchid from Eurardy to Israelite Bay, flowering during the months of August through October. 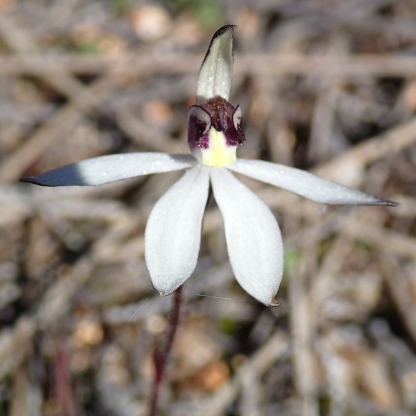 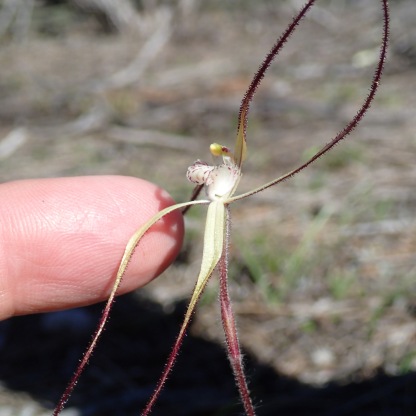 Leaves up to 4mm thick

However the next group of spiders is different, with shorter petals and sepals. They appear to be Chameleon spider orchids (Caladenia dimidia), which we also found yesterday. 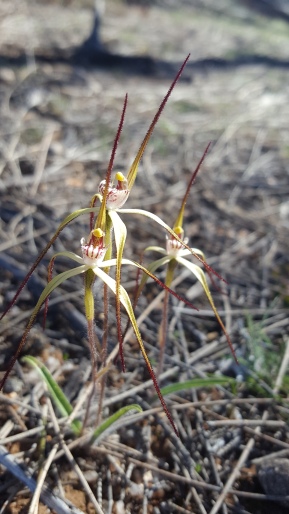 Back on the rock itself we come across some Little laughing leek orchids (Prasophyllum gracile), which flower July to October ranging from Shark Bay to Eyre.

Flowers are upside down 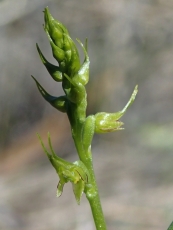 Up to 40 flowers per orchid 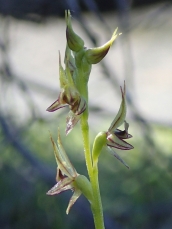 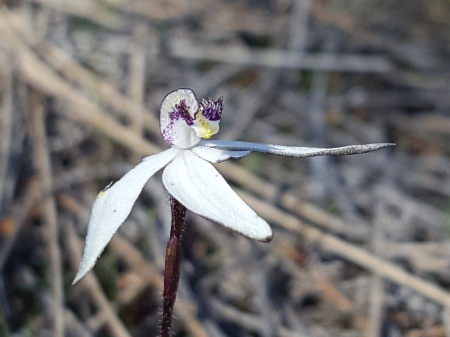 Appears to have been nibbled at 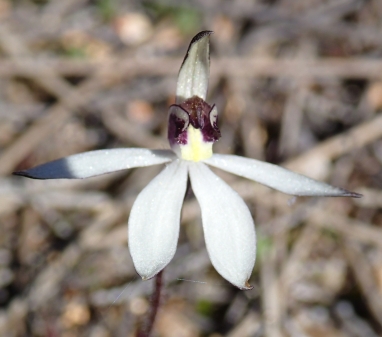 The spider orchids were again different to the ones previously found , however I think the reddish one to be another Chameleon spider orchid.

However the larger white spider orchid appears to be the Pendant spider orchid (Caladenia pendens subsp. pendens) due to its larger labellum and very pendulous petals and lateral sepals. This orchid flowers august to early October in a range from Wongan Hills down to Walpole and was named from specimens found NNE of Hyden.

We jump back into our Tritons and make our way further along the Holland Track. At the intersection of Kulin-Holt Rock Road we stop at what was listed as a Commemorative Plaque. The large rock on a cement pad with a white chain around it was there but no plaque to be seen, which was a bit disappointing.

From here we head further north till we reach the Hyden – Lake King Road. If we crossed this road the Holland Track continues however we turn West for the drive into Hyden as per the trip notes. It seems the track must be impassable north of the Hyden – Lake King Road. We arrive in Hyden and make our way into the town centre where we park up and make our way to the famous bakery for lunch.

After an awesome burger for lunch, we buy some supplies in the local store, fuel up and make our way as per the trip notes to Wave Rock. First point of call was the Visitors Centre to obtain an update on the track conditions to Coolgardie. No real updates as most travellers of the track proceed in the same direction as we are going, so no word of mouth updates from those travelling from Coolgardie. In the native growth between the buildings and the road we find some spider orchids which is promising.

They are from the Wispy spider orchid complex however I’m not able to confidently name the species. Nearby are some more Pink candy orchids.

Twin yet to open

Then finally a different orchid of the Caladenia genus is found. A lonely small Ant orchid (Caladenia roei) next to another nice Pendant spider orchid is found on the road verge so I jump out of the Triton to get some shots whilst Deb drives further along to get off the narrow busy road. 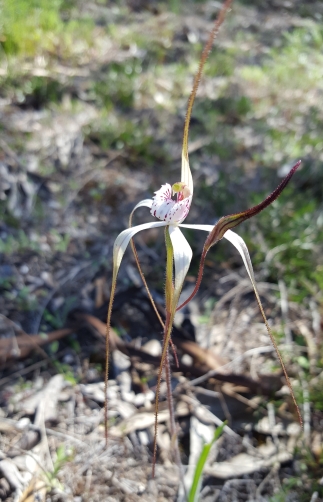 We now make tracks for the major attraction of this area. WAVE ROCK. We park the car and I head up to buy the parking ticket, followed by Richard. Deb checks out the bush behind the toilet block and calls us over once we place our tickets on our dashboards.

Deb had found lots of Blue Beards and some Hairy-stemmed snail orchids (Pterostylis sp. ‘inland’). Some quick shots taken before heading off on the walk trail to the WAVE. 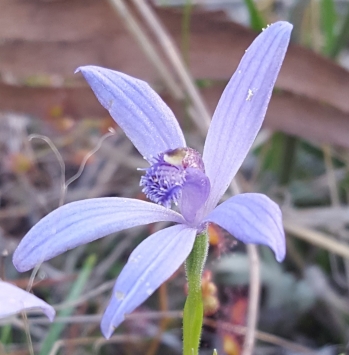 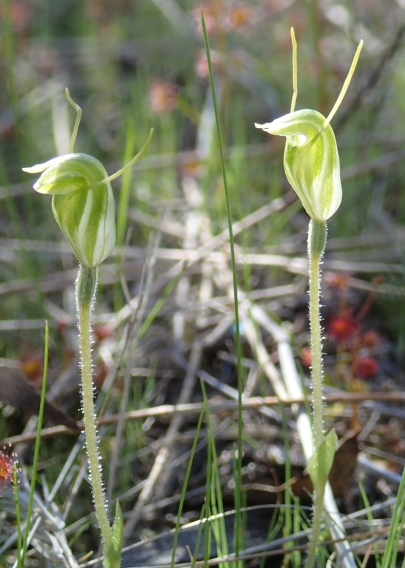 On the left side of the track we find a large patch of Hairy-stemmed snail orchids and a possible Mallee Banded Greenhood (Pterostylis arbuscula) which has been recently named and is located around the Hyden-Lake King Road.

Closer to the WAVE we find some more Ant orchids and a solitary Glistening spider orchid (Caladenia incensa) which flowers late June to September in a range from Hyden to Nerren Nerren Station north of the Murchison River. I get stuck at these two orchids showing a bus load of Asian tourists the orchids and ensuring they take photo’s without stepping accidently on the orchids. Once they move on so do I.

Close to the footpath . In danger of being trampled

Finally reach the ROCK WAVE so take some usual tourist snaps then I go into the bush looking for more orchids. I find a Jug orchid (Pterostylis recurva) and Sugar orchids. 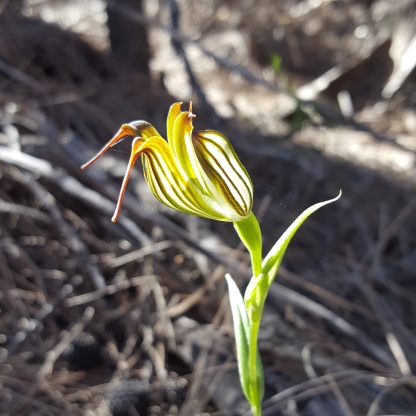 Nearly 3 pm so we decide to make tracks back to the Tritons. On the way we spy a great bunch of Blue beards so I naughtily climb over the rail to get a shot. At the ticket booth I find a panel showing the Glistening spider orchid, which confirms it is found locally. 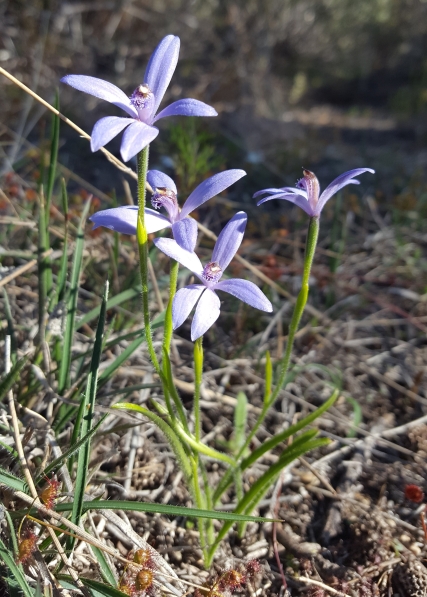 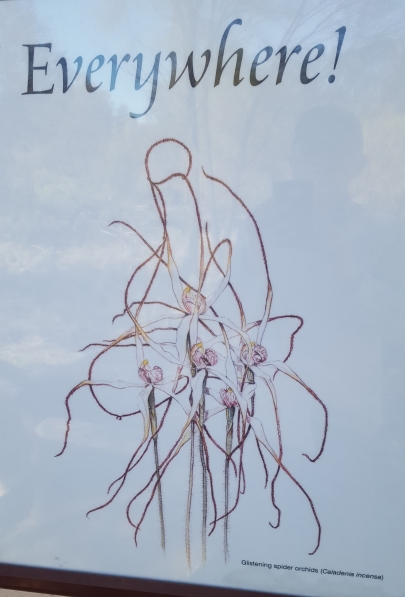 Now we move on east some 50kms to the start of the Holland Track – proper. I note in our Hema Road & 4WD Track Atlas that south along the Holland Track is a camp ground known as Emu Rock in the Bushfire Rock Nature Reserve. So rather than head north and hope we find somewhere to camp we make tracks for Emu Rock. After passing through the Rabbit Proof Fence and a couple of large puddles we find this amazing grassed camping area between the large granite rock and a salt lake.

After setting up camp and collecting some firewood I decide to go for a walk, in the late afternoon light, down to the salt lake for a quick look.  After walking along the edge of the salt lake I finally head into the bush surrounding and find many small Blue beards and Sugar orchids. 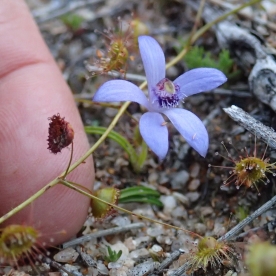 Size to my finger tip

Growing from under fallen twigs

Pushing through the scrub and fallen trees I finally make it to the track and immediately find some Chameleon spider orchids.

Then on the granite rock I locate some very small snail orchids, which seem to be more Hairy-stemmed snail orchids. Light is fading fast so make my way back to camp for another wonderful night sitting around a campfire. 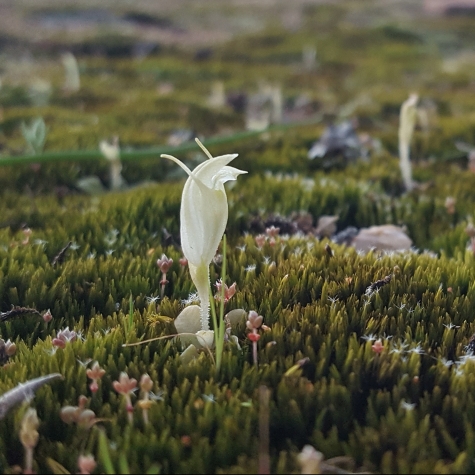 Growing in the moss on granite 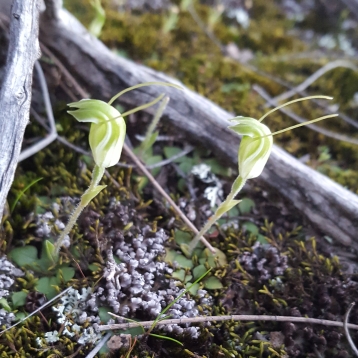 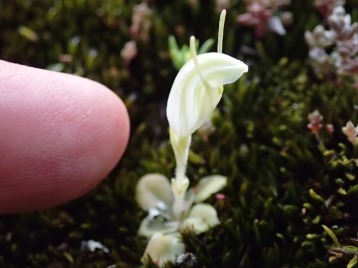 12 species found today in our trek from Dragon Rocks to Emu Rock.