Leaving camp after a wonderful breakfast we pass by Centenary Rocks as there does not appear to be a firm parking place or entry point, so we decide to just keep travelling along. Soon enough we come across some more water hazards of unknown depth, so our pace slows down again.

Its only 10.40am and its time for a pit stop before tackling a bog hole that is quite deep. No chicken tracks around this one. Whilst Deb and Richard are pondering their next move I check out the surrounding bush and come across a spider orchid and the good old Sugar orchid (Ericksonella saccharata).

Proving to be the most common orchid in these parts

Now to tackle the bog hole.

Just the other side of this hole I spy a bright green little orchid in the scrub so jump out to discover another Midget greenhood (Pterostylis mutica).

7.51kms into the day we hit a T junction and head north. Unfortunately this part of the track was sloping sideways and travelling up an incline. Without a strong forward momentum the Triton slips into the ditch and we are stuck.  With out trusty “Maxtrax” and some shovelling of mud,  Deb is able to get us out of a slippery situation.

At the top of this incline we pull over for morning tea, before turning east again and you guessed it, more water. However going slow through the water allows me to spy orchids in the nearby scrub. Further Sugar orchids found.

At least the sky is blue 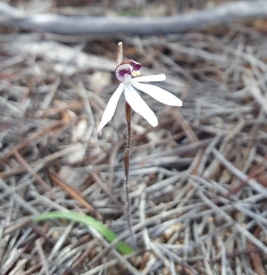 10 km further along is our lunch stop, Krakouer Rock. This was named after brothers Rudolph and David Krakouer who accompanied John Holland on his epic trek. Nice stop but only found some lonely snail orchids.  They appear to be more Hairy-leafed snail orchids (Pterostylis echinulata) due to the small size of the rosettes and small stature of the flowers.

16kms further along we come to Agnes Gnamma Hole which with the recent rains is overflowing. More snail orchids found here as well.

Ganamma hole in the foreground to the left. 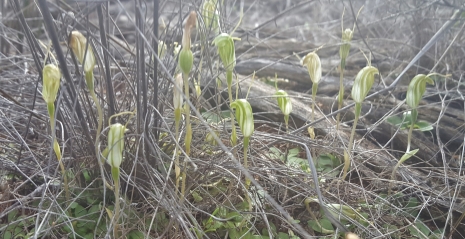 We have over 15kms to go before we set camp, so we make tracks and drive past Diamond Rock and turn off the track to camp at Thursday Rock. Its 5.19pm and after setting up camp I am allowed to go exploring the rock for orchids. Prior to getting to the rock on the walk trail I find large hoods of snail orchids. However to my surprise, bright yellow catches my eye, as I mounted the granite rock. All over the rock in groups are donkey orchids. From the location I will name these Yellow granite donkey orchid (Diuris hazeliae) which are found between Paynes Find and Salmon Gums flowering August and September.

We had the large campground to ourselves and lit to obligatory camp fire.

As the name suggests grows in soil pockets on granite outcrops 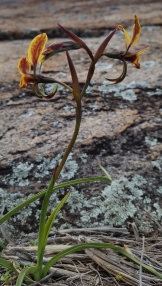 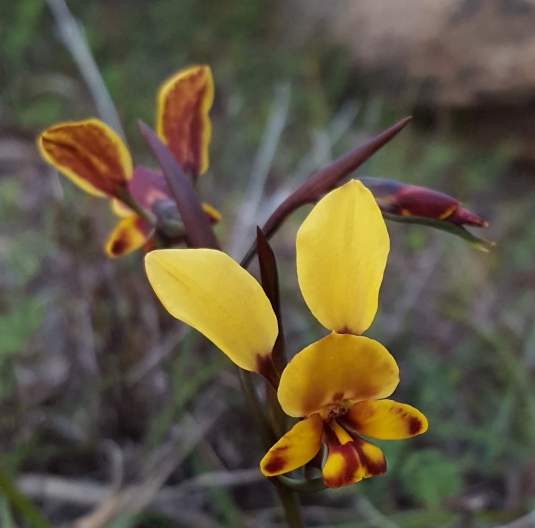 The bright yellow that caught my eye 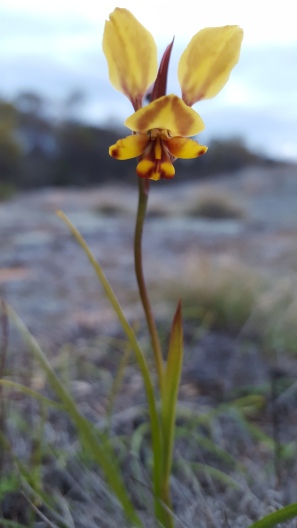 We enjoy another meal cooked on the campfire and make our way to bed exhausted form another day on the track. Orchid numbers down but another eventful day. What will tomorrow bring.