After a wonderful breakfast we pack up camp and I then take Debbie and Richard for a walk to Thursday Rock to show them what I found late yesterday afternoon. First up are the hoods of Snail orchids. Upon further investigation these are Hairy-stemmed snail orchids (Pterostylis sp. ‘inland’) as they have more than one stem leaf, which is a feature of the Hairy-leafed snail orchids.

One to three stem leaves

We now reach the rock and I immediately take them to see the bright yellow donkey orchids. The Yellow granite donkey orchids (Diuris hazeliae) were found all over the rock. 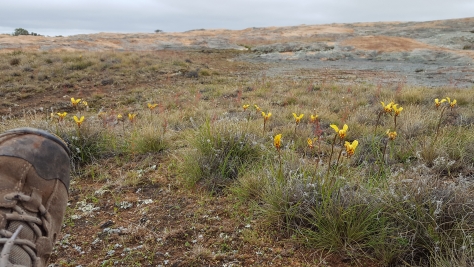 Image taken to appreciate how small the orchids actually are.

At the base of the rock we come across a large hood of snail orchids , so just had to share a photo. 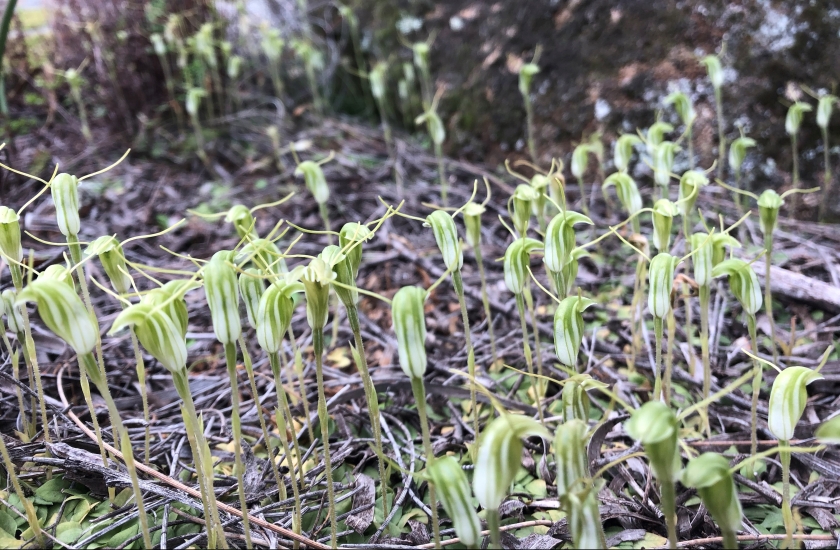 Largest hood we have found to date

Well time has come to move on so we backtrack 1.87kms to the Holland Track and travel the final 17.72km of the track in around 2 hours. Still water over the track in places, though much easier than previous days. Upon reaching Victoria Rock Road we pull over to inflate our tyres and take a well earned stretch before grabbing a quick photo, then its off to Victoria Rock for our planned camp for tonight.

Victoria Rock though is 25.6kms of sandy track with bad patches of corrugation away. The camping ground at Victoria Rock  is located in a Nature Reserve and lucky for us we have it all to ourselves.

Before setting up camp fully, a walk around the rock beckoned so off we all trot for a quick inspection. We were not to be disappointed. First up were some more snail orchids which only had one stem leaf. However due to the location they can only be Hairy-stemmed snail orchids (Pterostylis sp. ‘inland’) which have one to three stem leaves. 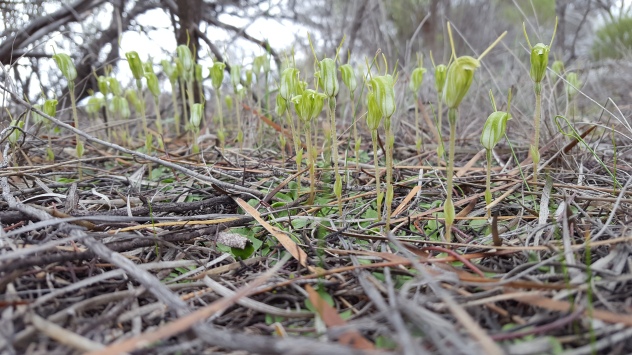 This particular hood had only one stem leaves, however the species can have up to three. 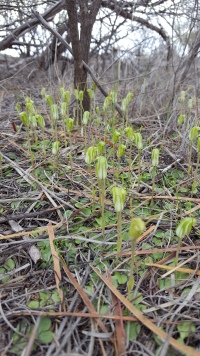 Many rosettes that did not produce a flower

Next were more Yellow granite donkey orchids (Diuris hazeliae), however not in as big a groups as on Thursday Rock. 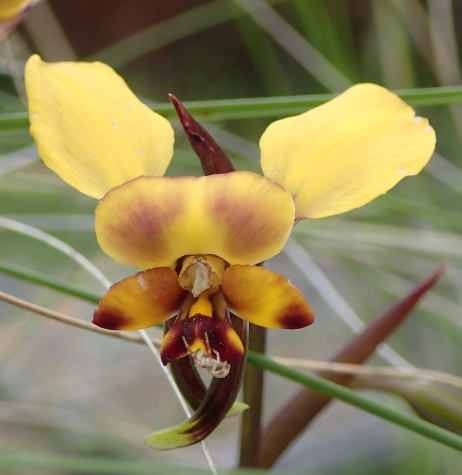 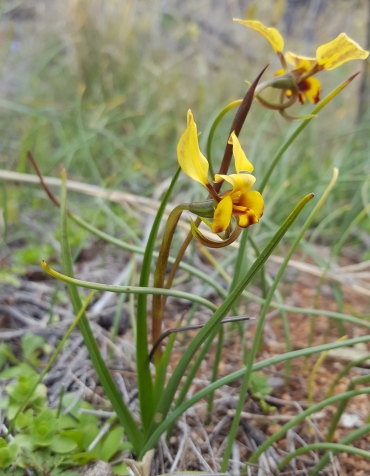 Then finally, another new species for the trip is found. The Shy greenhood (Pterostylis allantoidea) has a distinctive hood where the dorsal sepal extends past the adjoining petals.

United dorsal sepal and petals forming a hood with a narrow thread-like, downward extension over the column 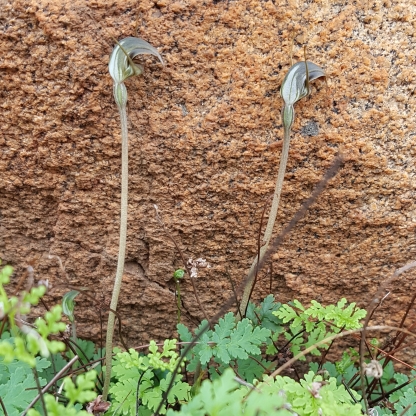 Nice size hood in the shelter of a granite boulder

While Deb and I stuck to the lower section of the rock Richard had trekked up to the summit. On his way down he came across a big group of Yellow granite donkey orchids and encouraged me to go an have a look. He was not wrong!

Then towards the bottom off the rock on the flats covered in earth and moss a large group of snail orchids is found, plus Richard spots our first Little laughing leek orchid (Prasophyllum gracile) and I come across a lone Sugar orchid (Ericksonella saccharata).

Named from the Latin – gracilis (slender), alluding to the slender tips to the sepals

Name derived from the Latin saccharatus (sugary, looking as if sprinkled with sugar)

Growing at the base of a granite outcrop

On arriving back to camp Deb sends me to bed as I have come down with a bad cold. Deb and Richard finish setting up camp, gather wood and light the fire and are in the middle of cooking dinner when I arise.

Campfire is lit at our Victoria Rocks campsite.

Not such a great end to the day but at least the variety of orchids has improved.