Deb arrives home after another overnight shift and seeing it is Sunday we decide to take a trip out to Coolinup Road so we can get a decent orchid hunt in before her next shift starts at 5pm.

We arrive at the little granite spot on Coolinup Road (Mud Map SE37/38), park the Triton and go exploring. In a field of Yellow flowering sundews (drosera) we find some bee orchids. Due to their small stature I will be naming these the Common bee orchid (Diuris decrementa) which flowers September and October in a large range from Gingin to Israelite Bay. 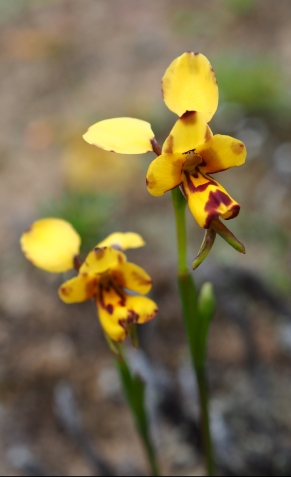 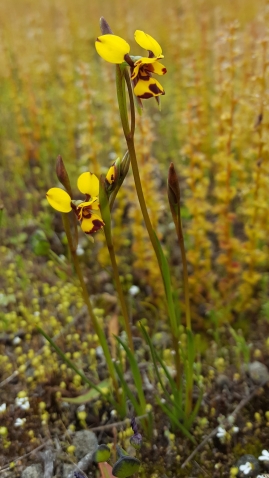 Glowing in moist run-off from granite 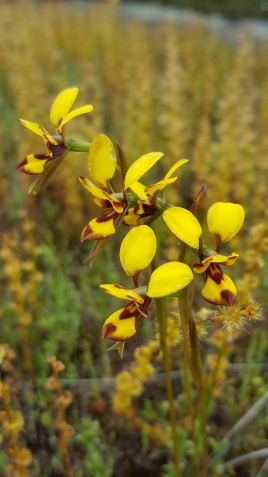 Also hiding in the yellow carpet were some small Lemon-scented sun orchids (Thelymitra antennifera) which flower July thru October in a very large range from Kalbarri  to Kalgoorlie to Israelite Bay including the whole South West corner. 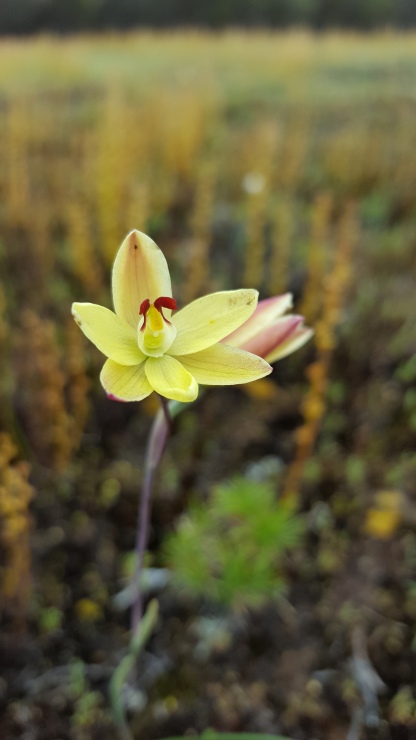 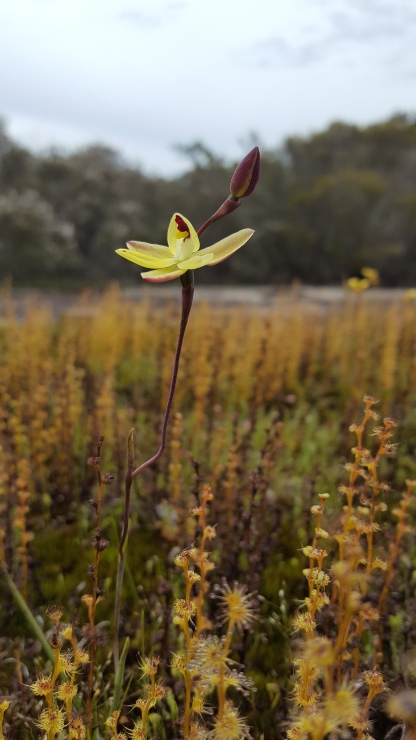 Growing in a bed of Drosera

What is it with yellow flowers today? Looking all alone is a small Cowslip orchid (Caladenia flava subsp. flava) which has the same large range and flowering period as the Lemon-scented sun orchid. 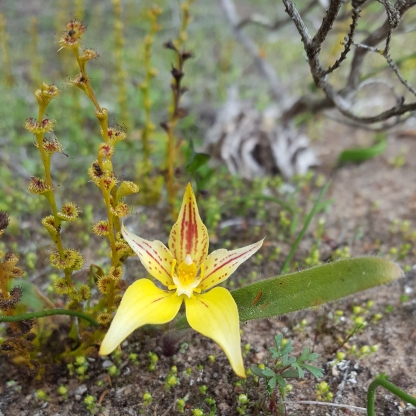 Cowslip with leaf – growing with drosera.

We decide to move away from the moist margins of the granite rock into the nearby scrub, via a recently bulldozed track and were rewarded with some spider orchids. They appear to be Esperance king spider orchids (Caladenia decora) which flower August to October in a south coastal from Bremer Bay to Cape Arid. 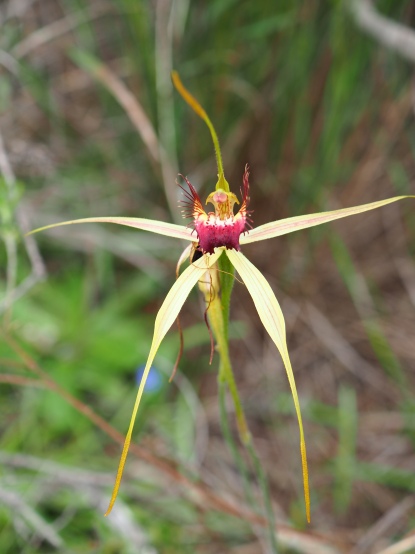 The bases of the sepals and petals are linear to lance-shaped and held stiffly for about one-third, then suddenly narrow. 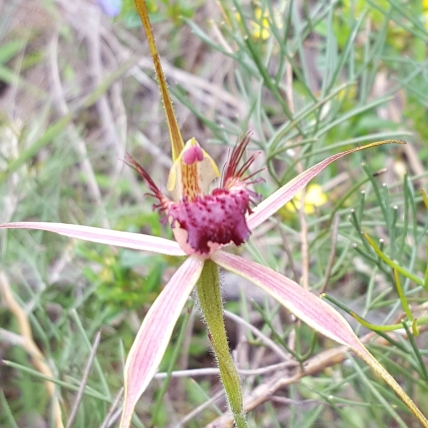 The labellum is dark pink with red stripes and ends in a dark tip.

The labellum has a fringe of narrow teeth up to 9 mm long but suddenly decreasing in length about half-way towards the tip.

As Debbie was moving aside from taking photos of the Spider orchid, to let me get some shots, she yelled in excitement as there hidden by a small shrub were some Bird orchids. My older reference book from 2013 would have this orchid named Esperance bird orchid (Pterostylis sp.’Epserance’), however my latest reference book from 2019 has included this orchid into the Bearded bird orchid (Pterostylis turfosa) species which has now extended it’s range of Bunbury to- East Mt Barren further east to Condingup. 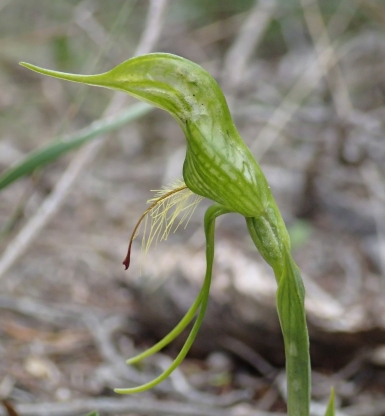 Distinctive rosette of spotted leaves that grow up the stem. 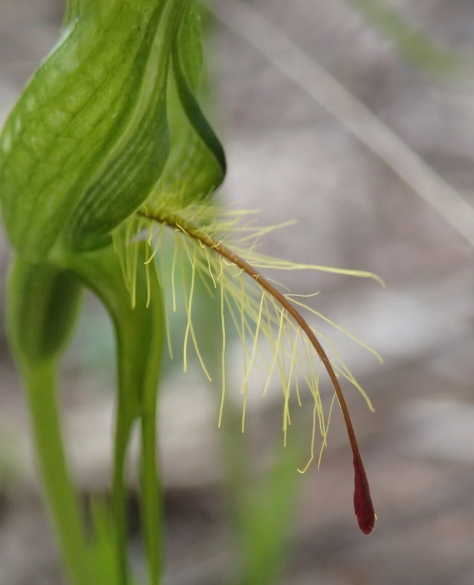 So happy to have found the bird orchids but we must move on. Walking back to the Triton we find a small double-headed Purple enamel orchids (Elythranthera brunonis) which flower August to early November in a large range from Kalbarri to Israelite Bay.

Dark tips to petals and sepals 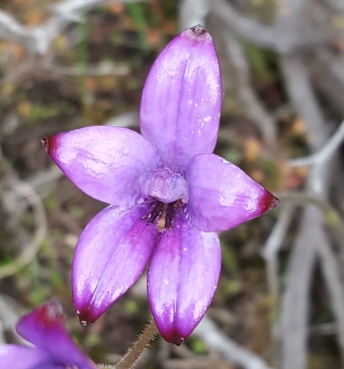 Then just before leaving had to grab some more pics of yellow.

Great contrast with the white flowers

I quickly run over the road and was rewarded with a grouping of Purple enamel orchids plus a large spider orchid which appears to be a hybrid, (Caladenia decora x C. longicauda). This hybrid is very common between the King and White Esperance spider orchids. 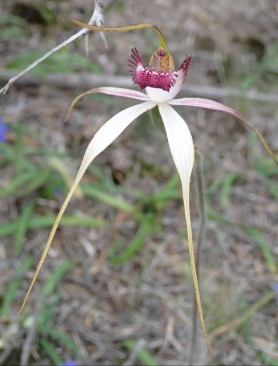 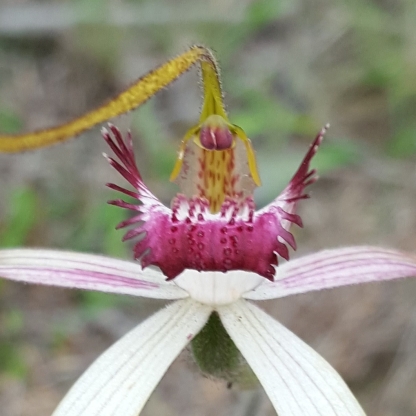 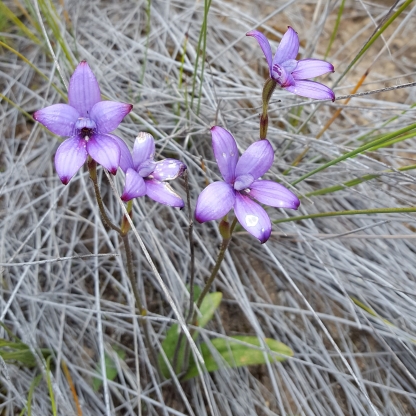 Who would have thought across the road would turn up such beauties. Well we finally move on to our track further north up Coolinup Road. First orchid found, the Jug orchid (Pterostylis recurva) was past its best. It flowers August to October between Geraldton and Israelite Bay. Then within minutes, more Purple enamel orchids are found. 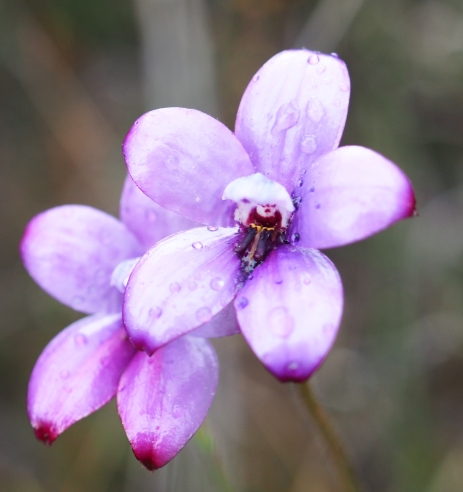 Season is over for this specimen

It was another 15 mins or so before we finally found something of interest. The very distinct Rattle beaks (Lyperanthus serratus) is found growing through the shrubbery. These brown and green orchid are found from Perth to Israelite Bay and flower in the months of September and October. 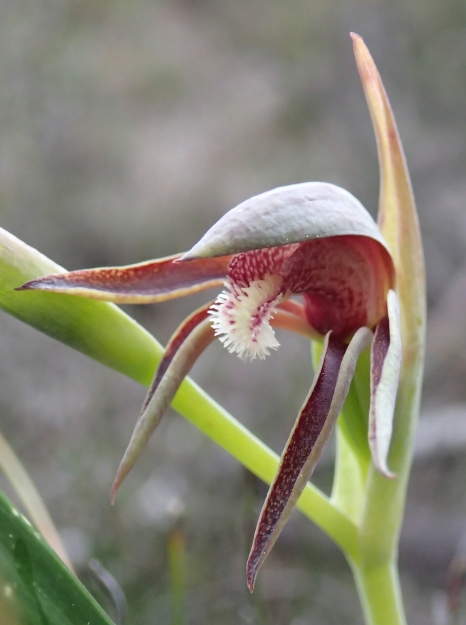 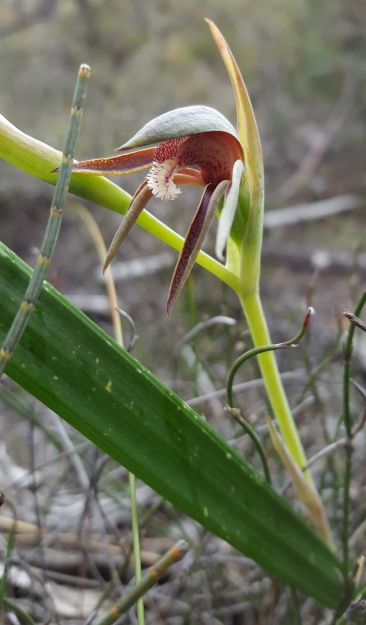 Then under our favourite  WA Christmas Tree we find a couple of little spider orchids. The Short-sepaled spider orchid (Caladenia brevisura) flowers August and September in a restricted location from Ravensthorpe to Israelite Bay. 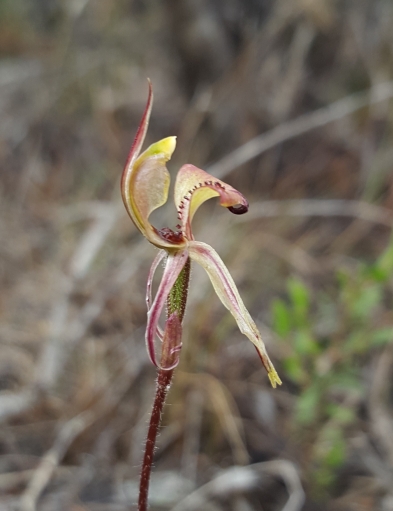 Down swept lateral sepals and petals 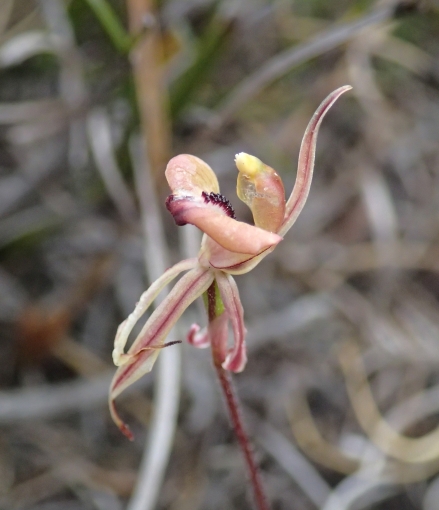 Debbie then ventures deeper into the scrub to the North of the area we usually check and is rewarded with finding some very large Custard orchids (Thelymitra villosa), which flower September through November in a large range, from Northampton to Israelite Bay. They have a distinctive large, broad hairy leaf and are brown-blotched yellow flowers. The blotching is more pronounced in the south eastern part of it’s range, which is where we have found it. You beauty Deb as this is a first for us this season.

Inflorescence of up to 20 flowers

Bright yellow stands out in the drab scrub we found it in.

Labellum mimics the sepals and petals

After taking  many photos of the custard orchids, we must move on as it it now 11.30am and Debbie starts her next shift at 5.00pm. Walking back towards the Triton on the gravel track we are lucky to find some more Rattle beaks. So of course more photos were taken.

Can have up to 10 flowers per plant

We now move onto our patch off Lane Road for a bite to eat. However before reaching the patch Debbie spies some spider orchids at the edge of the road, so I pull over to get a closer look. Large spider orchids appear with one being a Hypocromic specimen. Other nearby ones appear to be the Esperance white spider orchid (Caladenia longicauda subsp.crassa) which as the name suggests is found around the Esperance local, from Cape Arid to Jerramungup. They flower August to early October and these guys appear close to the end of their life.

Up to 3 predominantly white flowers per orchid 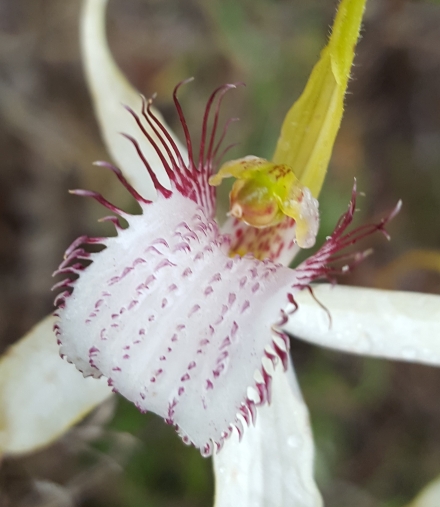 Up to 100 flowers per inflorescence 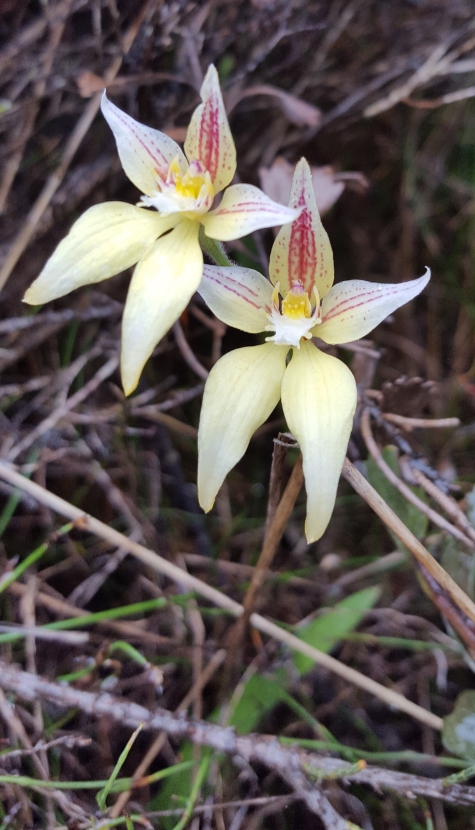 Dorsal sepal club is evident in this specimen 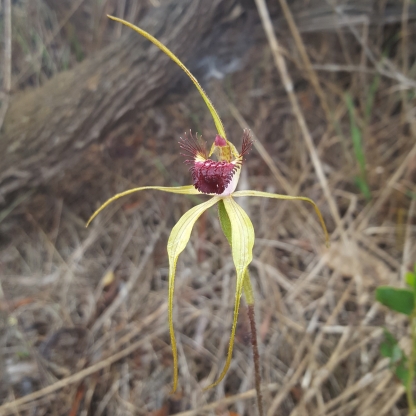 Also located near the spider orchids were some more Cowslip orchids and Purple enamel orchids. 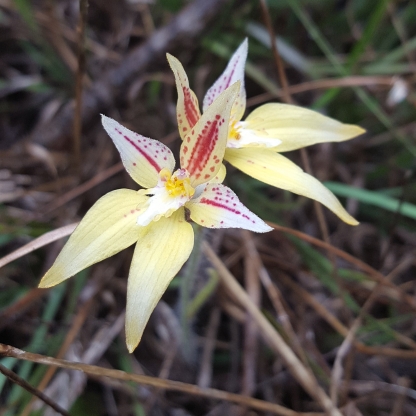 Such variation in their red markings

We make it a further 3kms up Lane Road before we pull over to check out a bush block on the right. We are restricted on proceeding into the scrub very far by a fence, however as this area was was open we were able to move around easily. First orchids found were the small bee orchids together with some Lemon-scented sun orchids. Also found was a sole Rattle beak. On closer inspection the bee orchids are more yellow than the previous ones found today, with less markings so I refer to my orchid books for assistance. I now confidently name these ones Elegant donkey orchid (Diuris concinna), which flowers September to early December between Cape Arid and Fitzgerald River National Parks. 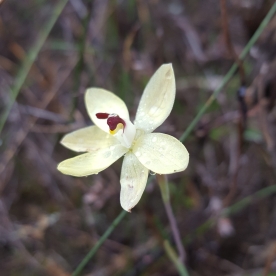 Still open on a wet day 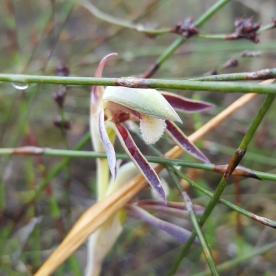 So lucky I got some photos of the Elegant donkey orchid. Not great shots but I now have a record of this first find. Next stop is near the old Neridup tennis courts where we find a good number of spiders orchids. These appear to be more Esperance king spider orchids as they are more brightly coloured with clubbed sepals. 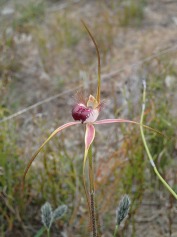 One of the bigger spider orchids found in WA

Caught up in cobwebs

Time is getting away from us, so we make tracks down Backmans to Scaddan Road where we make one last roadside stop to grab some photos of an unidentified spider orchid.

Leaving this last stop we head for home, so Debbie can get ready for her shift which starts in just over 3hrs.

After Debbie leaves for work I decide to take a quick look in the Woody Lake Nature Reserve along the Kepwari Walk trail from the Wheatfield Lake end, as a colleague at work mentioned he saw some possible orchids when he was riding his pushbike down the trail. After walking over 1 km of the trail the only orchids found were small patches of Cowslip orchids. The flowers my colleague described were some lily type flowers. Not orchids, unfortunately.

Growing on the side of Kepwari walk trail

As the name for this post suggests, the common colour this day was YELLOW.

It was a very successful last day of September, which is the month when Western Australian orchids are most prolific. We found 13 different species and 1 hybrid, together with a Hypochromic variant. 2 first time finds – Elegant donkey orchid and Custard orchid were the icing on the cake.