Today we headed out to a new location called Mount Ney which is around 100kms NW of Esperance. First stop was a track off Coolinup Road just past Lane Road . I spotted some Banded Greenhood (Pterostylis vittata) so jumped out and grabbed some photos. A little further along a solitary Snail orchid was found. New find Brittle snail orchid (Pterostylis timothyi) . Found July through September between Lake Cronin and Esperance. 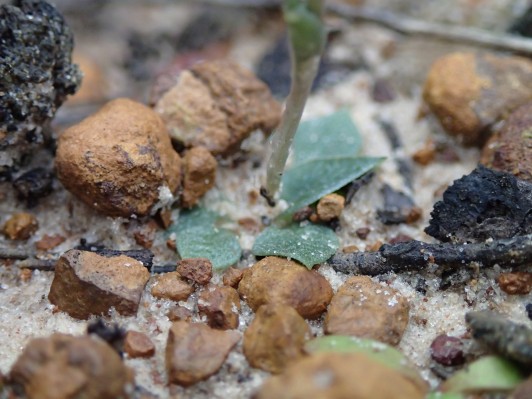 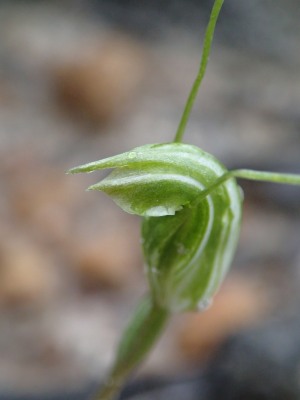 Whilst I took the photo of the new snail orchid Deb wanders into the scrub on her side of the road and gives me a yell. She has found a spent Scented autumn leek orchid (Prasophyllum sp. early) and very close by many Hare orchid leaves. 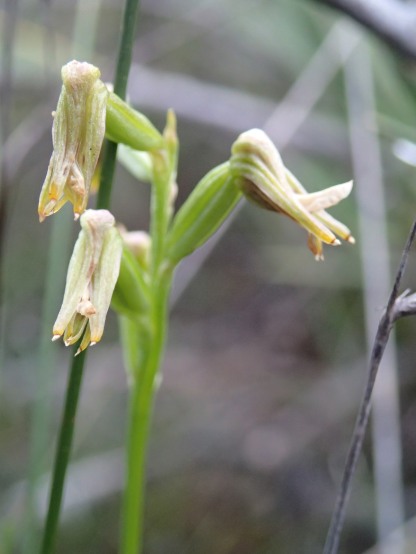 We are walking along some tracks made by vehicles pushing through the scrub to get around the road which must get very boggy when wet. Luckily for us this is not the case today, however the tyres get caked in mud. On this bush bash track I stumble across 4 little Pink bunny orchids (Eriochilus scaber subsp. Scaber). So exciting as we were only looking for these yesterday at Lake Monjingup, as that was the first and only place we had ever seen these orchids before. Pink bunny orchids flower July through September between Jurien Bay and Cape Arid National Park.

Next find are another new breed of Snail Orchid – Robust snail orchid (Pterostylis dilatata) which is found May to August between Geraldton and Israelite Bay. Previously found in Mondurup Reserve in Mt Barker back in July 2015. Further past their best Hare orchids found then another type of snail orchid is found by Deb. Will call these Fawn snail orchid (Pterostylis sp. ‘small stature’) due to the grey-green or blueish prominently veined rosette of leaves and the faint fawn colour to the flower. Fawn snail orchids flower from June to August and range from Southern Cross to Israelite Bay. 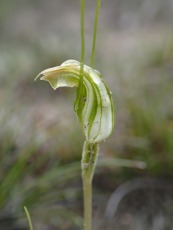 Snail orchid with a drop of water on his head 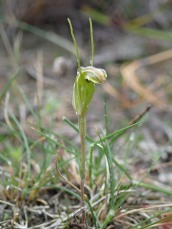 Came across some better Hare Orchids (Leporella fimbriata) so took some snaps before jumping in the Triton and making tracks to the planned destination. 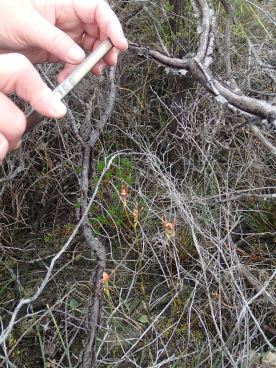 Deb getting a shot with her iPhone

Turning North off the now track that is called Howick Road we skirt along a farmers boundary until we reach what we feel is the closest we will get to the granite outcrop named Mount Ney. Prior to reaching the granite we only find some Hare orchid leaves which is not promising. Once on the rock Deb’s keen eye though finds some Banded Greenhood (Pterostylis vittata) and then some Mosquito orchid (Cyrtostylis robusta) hiding under fallen branches. I had walked only 1 metre away but did not see the Mosquito orchids. 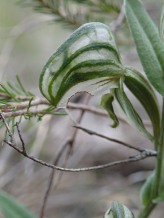 Something has taken a bite out of this one 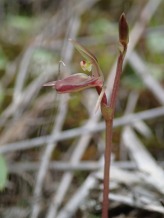 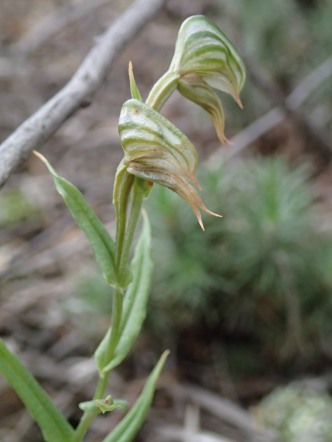 First find on the rocks of Mt Ney

We saw so many spent White bunny orchids and yet to flower Donkey orchids, with Caladenia and Thelymitra leaves thrown in for good measure. Only flowers found were some more Banded greenhoods so we decided to make tracks back down hill to the Triton as it was past lunch time.

Then there it was, the one and only Donkey orchid in flower. OMG we were beginning to think we would have to come back to see them in flower. It was a Beautiful donkey orchid (Diuris pulchella) which flowers July to September and is found between Salmon Gums, Esperance and Balladonia.

Our sole orchid in flower

After lunch and nearly at the end of Coolinup Road (Mud Map SE 38)  we stop at the little granite outcrop we had visited back on the 14/05/2017. I venture to the left and Deb takes the right. I discover a lot of leaves for an unknown orchid (Rabbit orchid?) when Deb hollows out for me to come and look. It appears Deb has located some Dark banded greenhoods (Pterostylis sanguinea) which is another new find for this season. They flower from June to September and range between Mullewa and Toolinna Cove.

Orchid group on FB identified them as leaves from the Rabbit orchid. (Leptoceras menziesii) 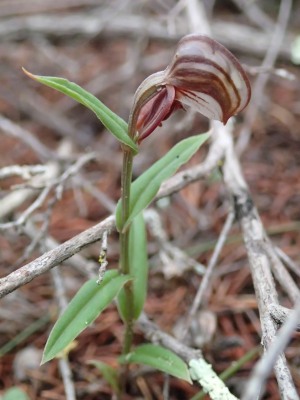 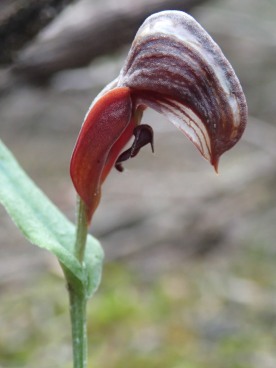 Such a dark specimen

Many other leaves found but nothing yet in flower. We head home as Deb starts her shift at 5pm.

A great day out with 9 different orchids found