After a quick breakfast and a long hot shower we make up the thermos and head off to fuel up, then make tracks for the North Wagin Nature Reserve, our first planned stop of the day. Just off the road, on the track chosen to push into the reserve, I spy a group of Jug orchids (Pterostylis recurva) which we will check out on the way back. We park the Triton and camper near a dam and head out on foot to check out this new location. First find is the Banded greenhood (Pterostylis vittata), quickly followed by Western wheatbelt donkey orchid (Diuris sp. ‘western wheatbelt’).

Green and white banded flowers, 8 to 10 mm across

Mostly found east of the Albany Hwy. Between York, Tenterden and Ravensthorpe 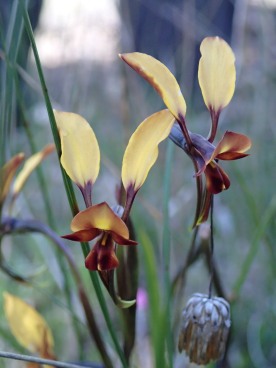 Many donkey orchids were found and mixed in with these we found some Little pink fairy orchids (Caladenia reptans subsp. reptans) distinguished by their leaf having a red coloured underside. Another common orchid found here was the Fringed mantis orchid (Caladenia falcata) which competed with the donkey orchid to be the most common orchid in this location. As planned we took pictures of the Jug orchids as we made tracks for our next location.

Short spreading petals and sepals with a prominently tri-lobed labellum 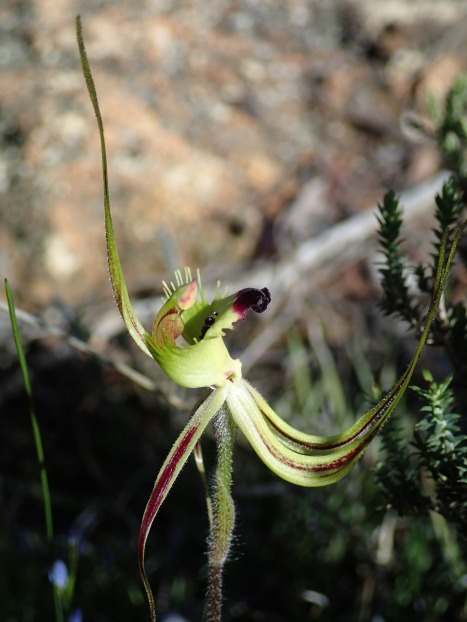 Looking into the jug of the aptly named orchid

View looking down into the labellum

Piesseville was our next location and we finally found flowering orchids, after other visits turned up leaves and buds only. As with the Wagin location the Fringed mantis orchid was very common, as were the Sugar orchids (Ericksonella saccharata), however the later were restricted to a few metres in from the road. Cowslip orchid (Caladenia flava subsp. flava) was also plentiful, but further into the bush.

Size comparison with my index finger 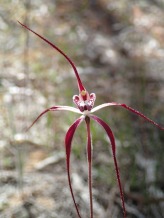 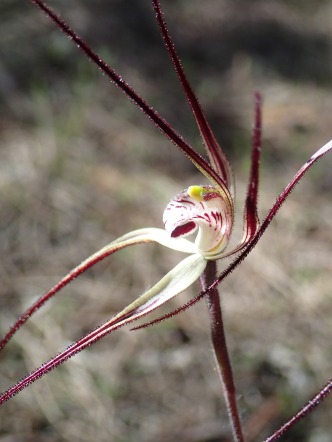 Closer shot of the small labellum 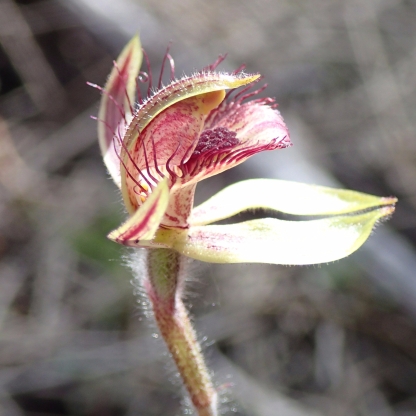 In the northerly section of the location we find some Western wheatbelt donkey orchids and in the swampy section I find some Blue beards (Pheladenia deformis) of varying shades. I track down Deb who has crossed to the other side of the road and took her back to where the Blue beards were located. 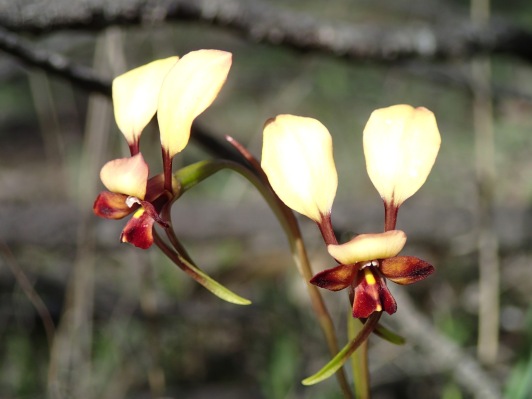 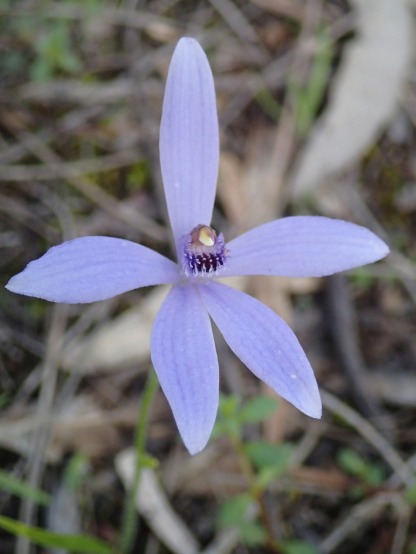 Narrow, upright labellum with short fringe segments and a dense mass of calli 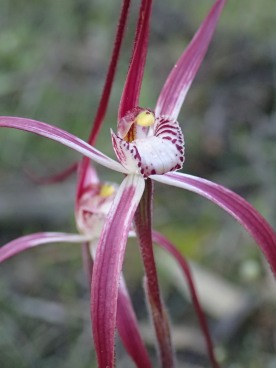 Lateral sepals yet to be released 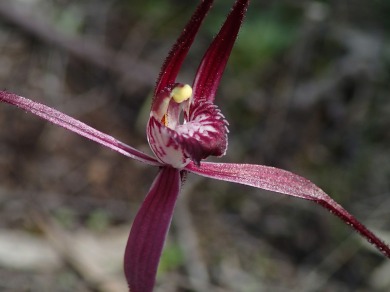 Then an OMG moment, when Deb spies an all red spider orchid. Appears to be Blood spider orchid (Caladenia filifera) NEW FIND!!!! These are found between Tenterden and Wongan Hills and flower August to early October. Not 100% certain as it was not clumping, but single flowers. Edit: After locating Blood spider orchids at Forsyth Woodland this one appears to be a red variant of another species.

Other orchids found at this location were Jug orchids and Banded greenhoods.

We moved on and called into Narrogin to buy some supplies and an extra gas cartridge for the shower unit. We then drove north-east and stopped off at North Yilliminning Nature Reserve for lunch and checked out this new location. Not far into our search and we were bombarded with yellow from so many Cowslip orchids. Various shapes, patterns and sizes with some having very long lateral sepals.

Another herd of Cowslips with redder markings

Next orchid found was the small Sugar orchid followed closely with some Donkey orchids. Most likely, Western wheatbelt donkey orchids. Also found were some Banded greenhoods 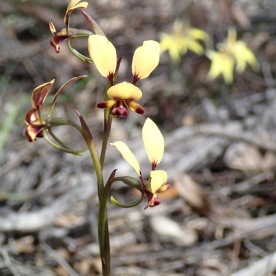 Last two flowers for this orchid

A very unusual colour catches Deb’s eye as she has found a Hybrid orchid. A Spectacular spider orchid (Caladenia x spectabilis) which is a hybrid formed by a Cowslip and Pink fairy cross pollinating. Further colour variations were found. However to muddy the waters, the Little pink fairy orchid is found which may be a parent of the hybrids, in which case the orchid is unnamed and referred to as (Caladenia flava x C. reptans). For now I will leave the judgement open. 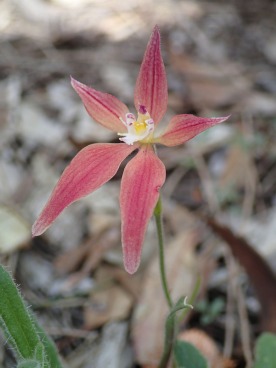 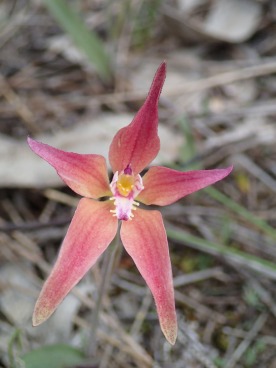 Another variation in colour 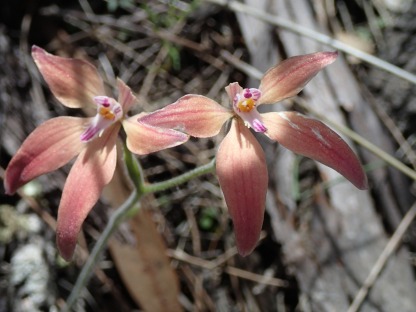 Dorsal sepals have both been eaten. 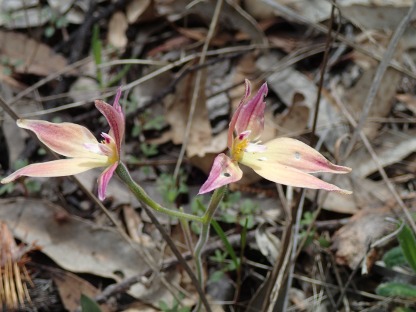 Edit: 29/10/2017 – From further investigations it appears all Hybrids found were Spectacular spider orchids due to the longer lateral sepals. Blooms August to October and found from Kalbarri to Esperance 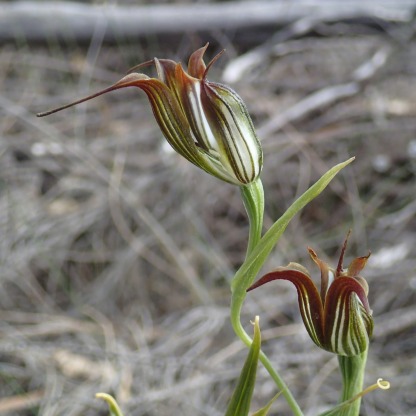 Quick toilet stop in Wickepin, which was a very neat little town with a museum for Albert Facey, who is famous for his autobiography “A Fortunate Life”. We make one final stop, before catching up with Richard, at Malyalling Nature Reserve. Along the road that dissects the N.R. I spot some Ant orchids (Caladenia roei) which flower August to October between Eurardy Station and Ravensthorpe, and when taking photos also noticed Fringed mantis orchids nearby.

Crucifix shape adopted by the petals and lateral sepals 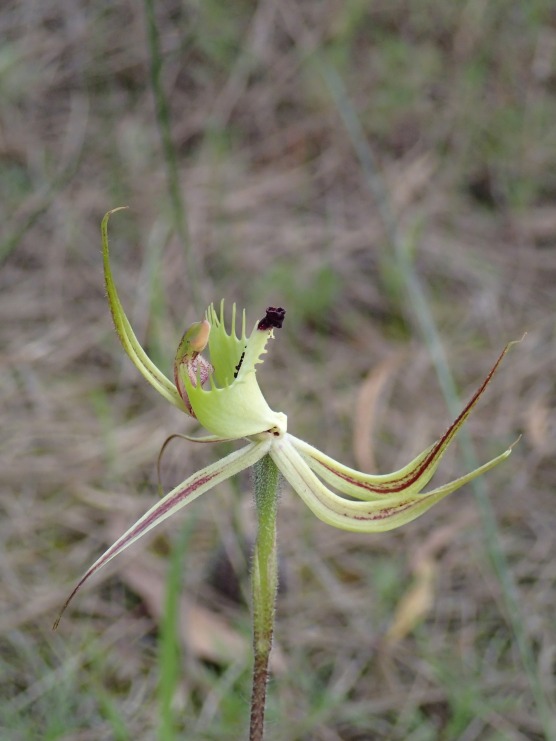 Some Donkey orchids were also found and at the Eastern boundary of the N.R. we found a patch of  Fringed mantis orchids. Too many to count.

We made our way back to the low granite outcrop and Deb immediately finds some purple variants of the Little laughing leek orchid (Prasophyllum gracile) which is quite rare according to my orchid book, so a great find Deb!! Also found on this rock were Lemon-scented sun orchids (Thelymitra antennifera) which flower from July to October between Shark Bay and Israelite Bay and very small donkey orchids. 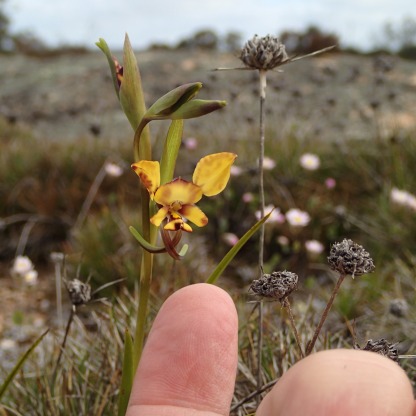 Size comparison to my index finger 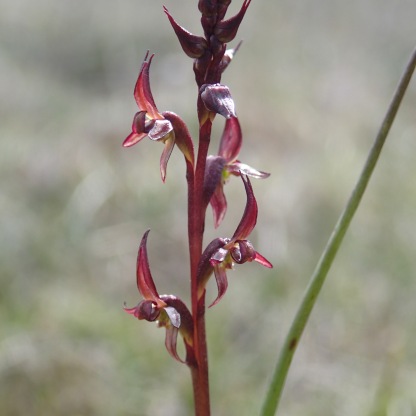 Up to 40 yellowish-green, or, more rarely, purplish, flowers 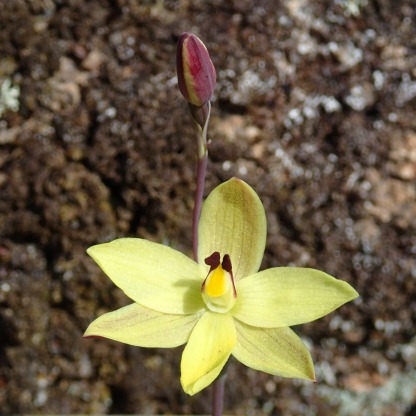 A distinctive column with a yellow crested mid-lobe and reddish-brown, ear like lateral lobes

After finding 18 orchid varieties it is now time to head off for Kwolyin campground, where Richard is waiting for us. … Trio travelling begins.

Triton and camper . Richard with Red Triton and tent.