After having breakfast we make our way north to Dudinin which was a quaint little town but with no real prospects for orchid hunting we move on further north to a place called Jitarning. We park next to the CBH wheat bins and head into the bush adjacent. The area proves to be thick with Donkey orchids with a small patch of Pink candy orchids (Caladenia hirta subsp. rosea) found.

Spreading petals and sepals with a narrow upright labellum 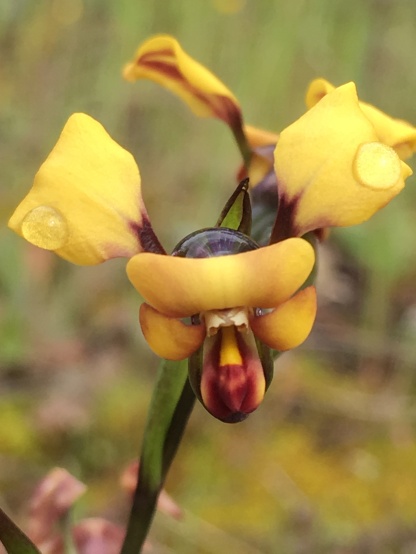 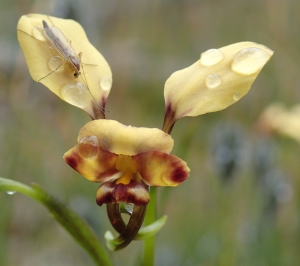 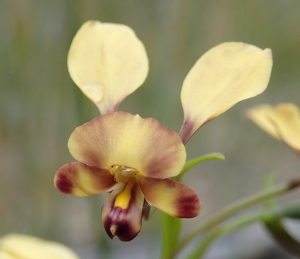 So many donkey orchids but we need to move on. Well not to far as we cross the Williams-Kondinin Road and visit the bush the other side. The only orchid found over this side was the Midget greenhood (Pterostylis mutica). On walking back to the Triton we discover the area we had been exploring was in fact the Jitarning Nature Reserve.

Next stop is the North Jitarning Nature Reserve a few kilometres north on the western side of the road. After parking the Triton we make our way west into the bush and our first find is the ever faithful Purple enamel orchid (Elythanthera brunonis). In fact they were everywhere in this reserve. 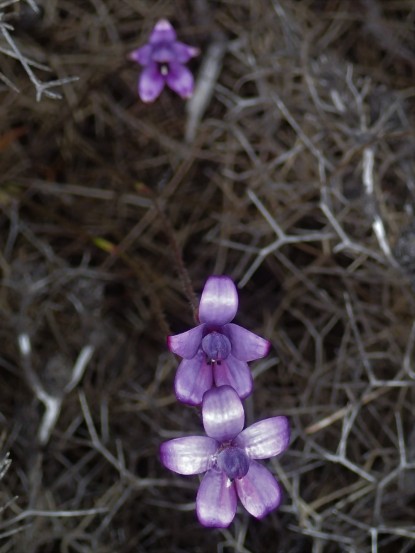 Up to 3 flowers per stem 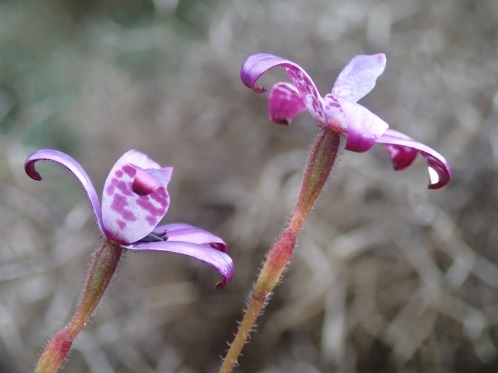 Underside of petals and sepals spotted in colouring 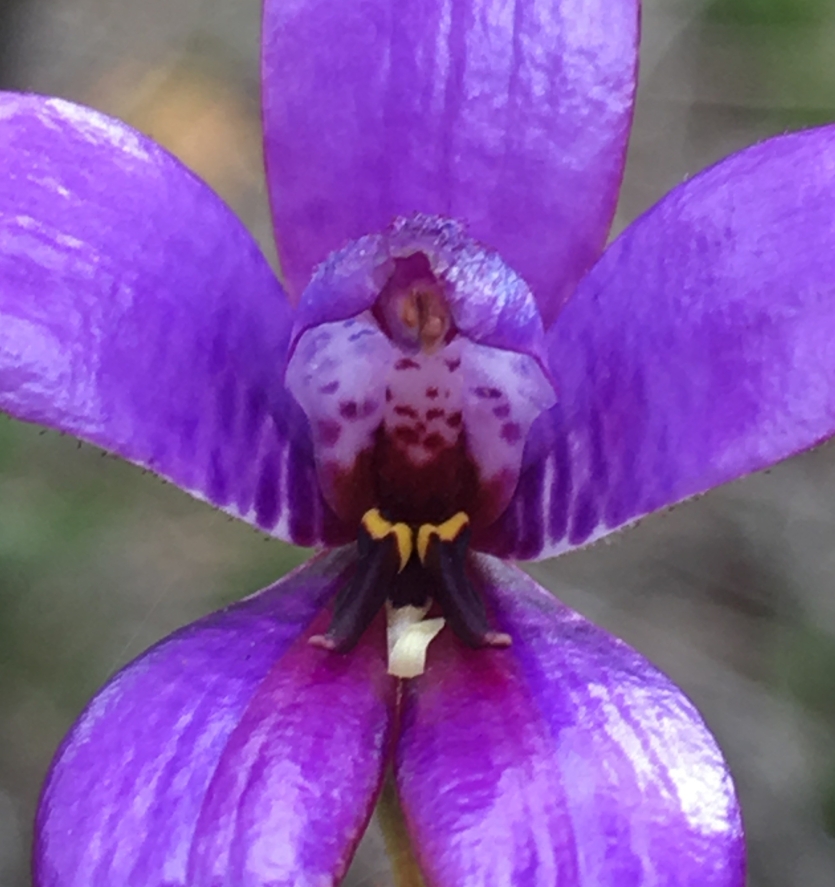 Further hunting and we found some Frog greenhoods (Pterostylis sargentii) growing underneath some bushes. 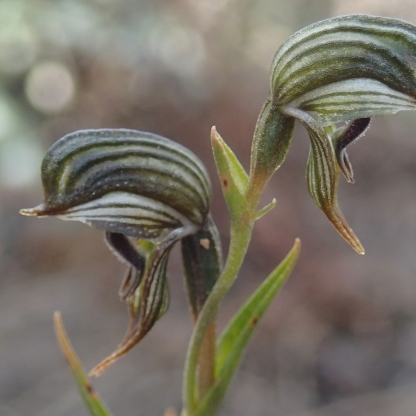 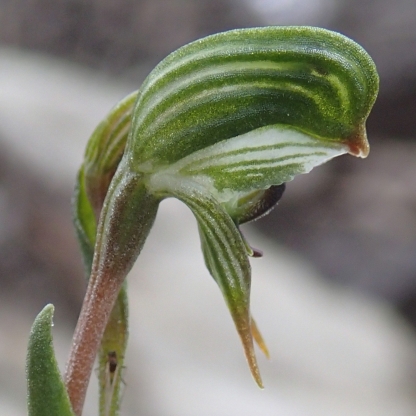 Then even further hidden under bushes Deb spies a bird orchid. Further specimens found, which all appear to be Dwarf bird orchids (Pterosylis sp. ‘dwarf’) as they are found between Eurardy Station and Peak Charles during August and September. We first found this orchid back in August 2016 near Corrigin.

Short lateral sepals which are joined at the base 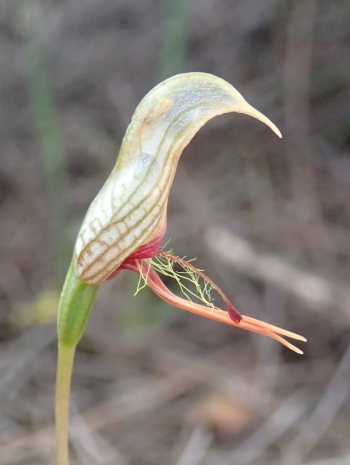 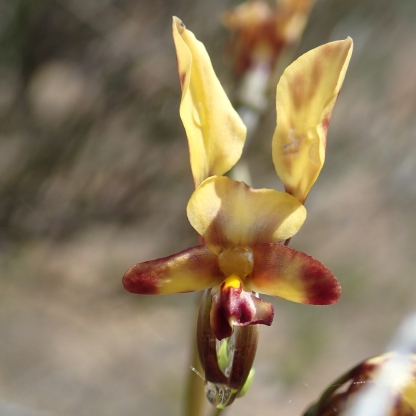 Unsure of the species of this one 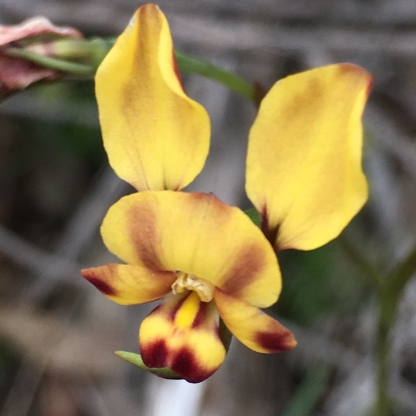 Up to 7 flowers per stem

We were also lucky enough to find a spider orchid, which I am naming, Red thread spider orchid (Caladenia erythronema) as they flower August to early October in locations between Nyabing and Mukinbudin.

We then make tracks for Kulin, to fuel up, then head off on the Tin Horse Hwy. After checking out some of the great Tin horses we make our way to Buckley’s Breakaway for lunch. 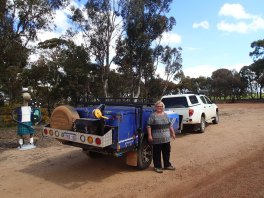 Harder rock than the surrounding soil 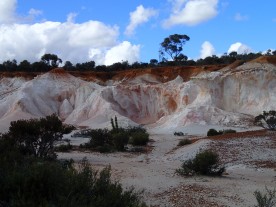 The breakaway is massive

On the walk from the car park / picnic area we find some Donkey orchids. Nothing else found on the walk around the breakaway, however it was an impressive sight. 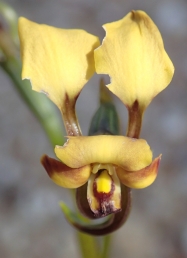 We now head further east, till we again reach Dragon Rocks Nature Reserve. At the northern end of the reserve, whilst earlier on the trip we were at the southern end. We find what we hoped was the road south, which dissects the reserve, and travel along slowly with heads out the windows looking for orchids. They proved more elusive than before but we did find our first ones. A finished Jug orchid then some Frog greenhoods. 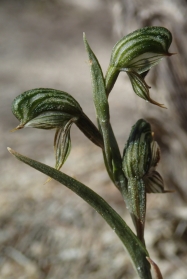 It was more than a half hour later, before any more orchids were found. Red beaks (Pyrorchis nigricans) were a surprise find.

Up to 7 red and white flowers

Further south we come across some spider orchids. From their appearance I will name these Chameleon spider orchid (Caladenia dimidia) due to the yellowish colouring, dark brownish tail filaments and backswept slightly elevated petals. 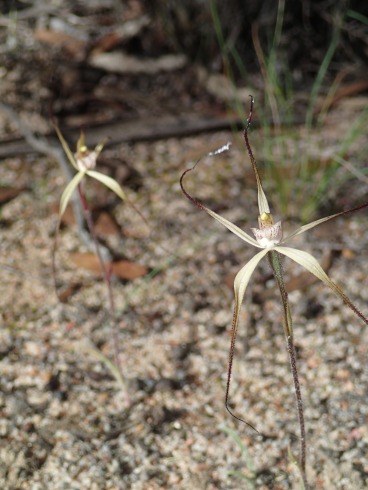 A solitary Cowslip orchid (Caladenia flava subsp. flava) and Jug orchid (Pterostylis recurva) were found a little further down the track, however as time was slipping away and we had previously visited the south of the Dragon Rocks N. R., we headed straight for our last stop of the day, being the Rock View Nature Reserve. 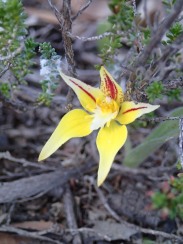 United petals and dorsal sepal forms hood over the column

It is now past 5.30pm when we arrive at Rock View N. R. so we quickly have a look around. First orchid I find is the Midget greenhood, whilst Debbie finds more spider orchids.

From the appearance I believe these to be further Chameleon spider orchids. 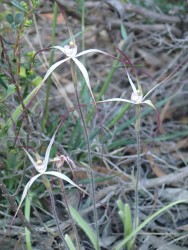 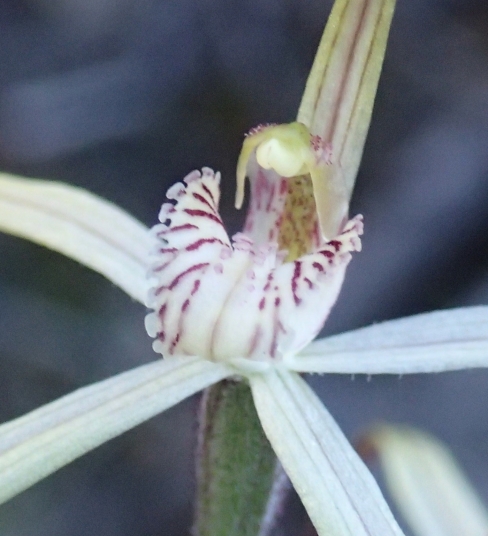 Due to the inclement weather we did not wish to set up camp, however as we were unable to find overnight accommodation, this stop proved to be the final stop of our  2017 Road Trip.