Finally after what seems like ages, we head off on a drive to search for some orchids. First stop is the wonderful Helms Arboretum, (Mud Map SE35 ) at the snail orchid plot. Well in previous years it was the snail orchid plot, however we may be a little early this year.

Eventually we come across some rosettes and then a few are in flower. Appears to be the species found 30/07 last year which could not be named. Western Australian Native Orchids Facebook group https://www.facebook.com/groups/517329235050125/ identified these as an unnamed snail orchid from the South East. 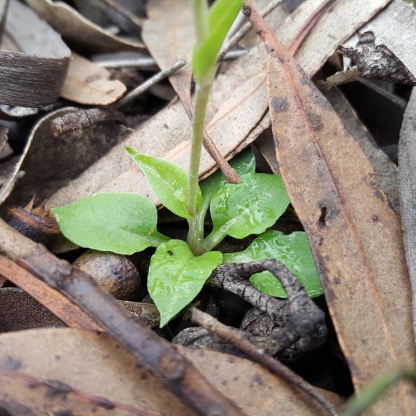 Flowers have a nodding stance

More of the same found so we decide to proceed to our next planned stop – Fleming Grove Road. Here we find lots of Hare orchids (Leporella fimbriata) in the final stages of flowering. 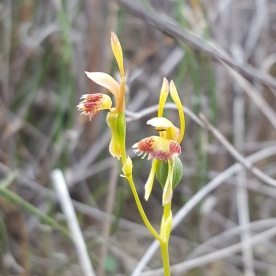 Finding protection in the bushes 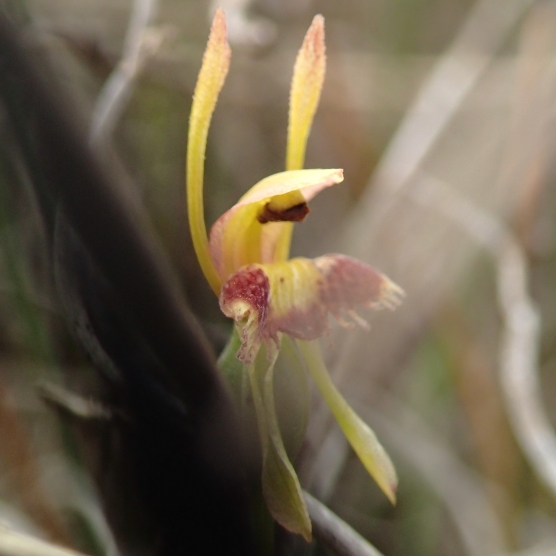 Pushing through the scrub we stubble across more Banded greenhoods growing under bushes for protection from being eaten by  the kangaroos.

Can have up to 25 flowers per plant

Insect like labellum flicks up when triggered by pollinator.

Then nearby  we are lucky enough to find a solitary donkey orchid barely in flower. Based on location this must be a Green Range donkey orchid (Diuris littoralis) which flowers July to early September over a near coastal range from  Denmark to Esperance. Then another more open flower is found closer to the greenhoods.

so far only 1 petal has appeared 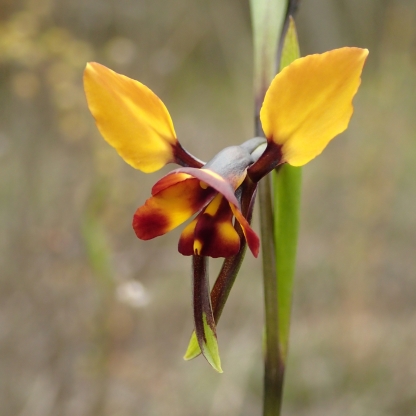 Dorsal sepal yet to open up fully 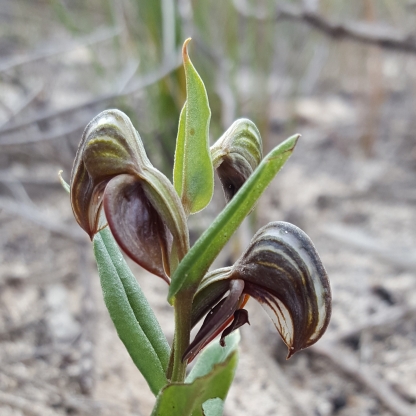 Next stop is Red Lake Townsite Nature Reserve where we take a break for lunch. Deb finishes her lunch first and heads off up the track by foot on her search. I have a quick look around , finding more Dark banded greenhoods, and then jump in the Triton to move up to Deb as she has found something new. Dwarf shell orchids (Pterostylis brevichila) are her find, which flower July to September in a range from Hyden to Mt Ragged. Great pickup Deb!!

Stem leaves but no rosette

Appears to be yawning

Next up Deb finds a Midget greenhood (Pterostylis mutica) so close to flowering. These little guys are found July to October from Wongan Hills to the SA border.  Also within coo wee are some yet to fully open Frog greenhoods (Pterostylis sargentii) which flower July to October in an inland range from Northampton to Grass Patch. Better specimens are found down another track.

Lateral sepals yet to open downwards

Then some more greenhoods are found, so last minute photos taken before moving on. 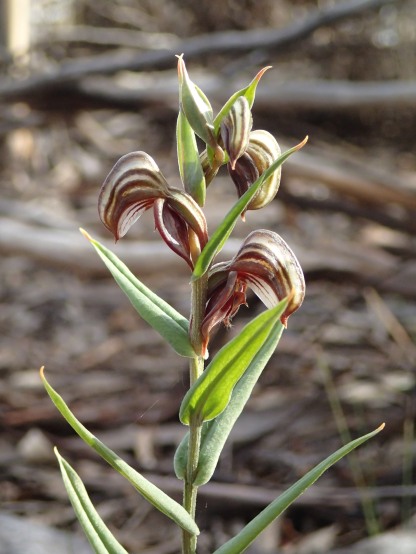 White bands are clear in these flowers 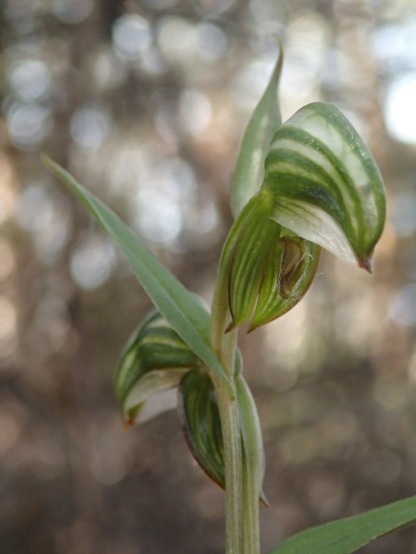 Our final destination for today is Eldred Rd near Salmon Gums, where we check out the woodlands surrounding a clay pan lake. (see Feature Image). Only orchids found were more greenhoods, but some appear to be the newly named Mallee banded greenhood (Pterostylis arbuscula) which flowers June to September in an inland range from Northampton to Eyre. All orchids  were restricted to the bases of the larger trees.

So today was a day that the Pterostylis orchids ruled. At least 7 species found.

The Diuris and Leporella are bonus orchids in a woodland of Pterostylis.