19/8/2017  On a tip from our friend Deb Witt we are heading north of Gibson to check out what lies within 50km of home.  However first we have our standard fully cooked breakfast at the Esperance Bird & Animal Park and then our obligatory check of Helms Arboretum.  Just past the large green log sign at the entrance we find some Esperance King spider orchids (Caladenia decora) of various colours. 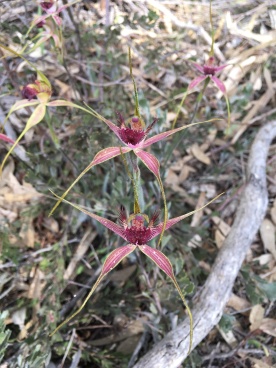 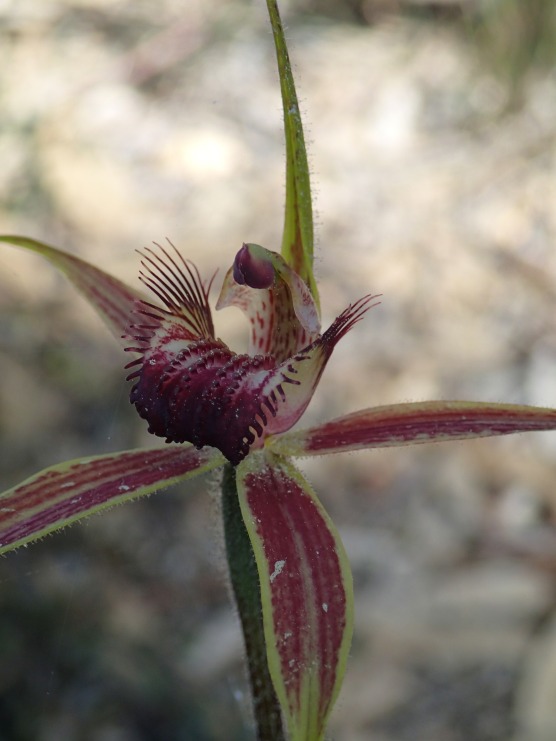 We also checked out our Curly Locks but it still has a way to go before flowering. Fingers crossed it is still there when we return from our September holidays.

Turning east from the Coolgardie-Esperance Hwy we park opposite a patch of scrub with a small lake. Just off the road where we parked Deb spots the first orchid of the day. Donkey orchids are found everywhere on the North roadside verge. Unable to verify exact species as the location does not match any in the books. Possible two different types found as one is duller yellow with hanging sepals and the other is brighter yellow with re-curved and crossed sepals.

We cross the road to the lake side and start looking around when Deb calls me over as she has found a Hare orchid (Leporella fimbriata). This distraction nearly had me  walking into a huge Golden orb spider (Nephila edulis). The poor old Hare orchid was well and truly finished for the season. 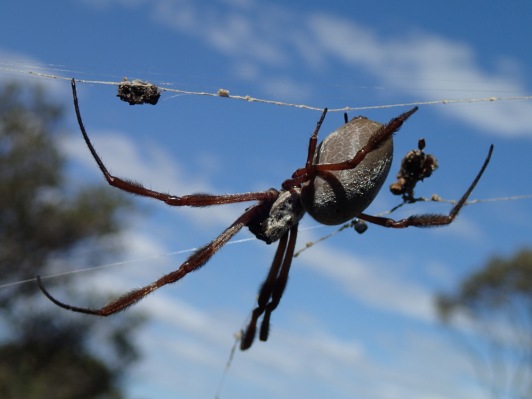 More searching and we turn up more Donkey orchids and the first Red beaks (Pyrorchis nigricans) sprouting from the many leaves spotted. In fact there were so many Red beak and Hare orchid leaves around you sometimes could not help stepping on them. 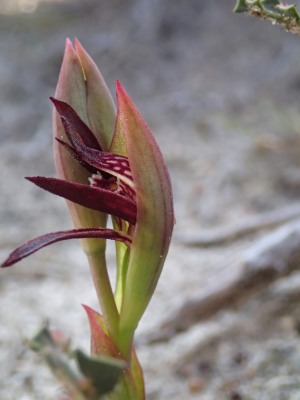 Flower squeezing itself out

Could be a reflection in a mirror 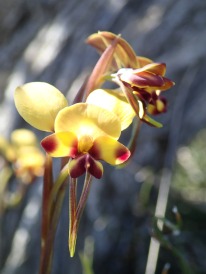 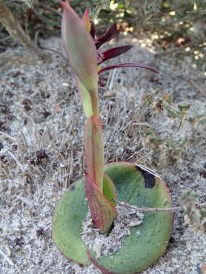 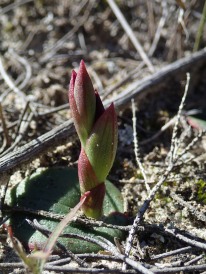 The first Pterostylis orchids of the day were also found. Banded greenhood (Pterostylis vittata) and Jug orchid , plus of course some more Donkey orchids. 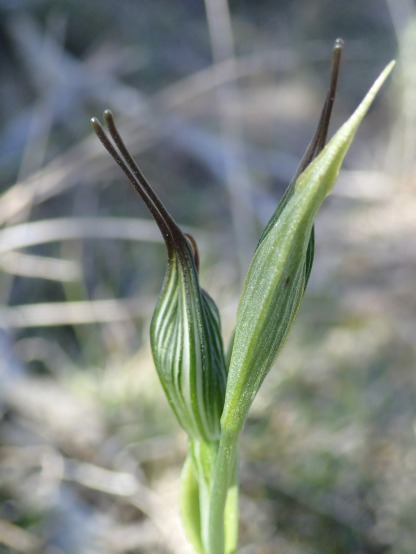 Still yet to fully open, looking like a stork or bird

Growing near the rushes 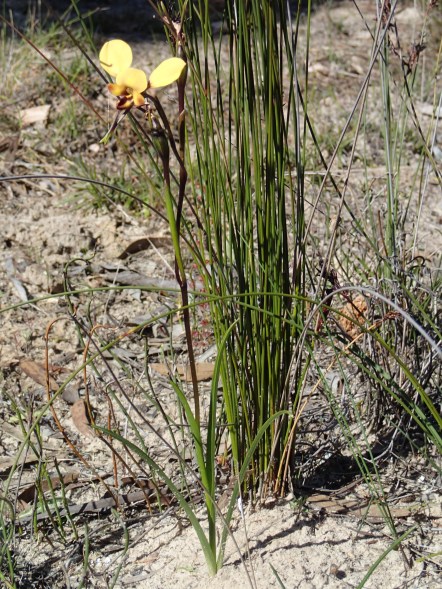 Quite a tall specimen

Looking under a tallish shrub I notice a patch of Banded greenhoods so make my way under to get a photo. Telling Deb of my find I glance down and there is this very small white coloured orchid. It happened to be a small Sugar orchid (Ericksonella saccharata) which was partially opened. I grabbed some photos and then moved over to take some Banded greenhood photos whilst Deb took some of the Sugar orchid. This little orchid actually fully opened over a period of a few minutes so my next shots were of it fully open. 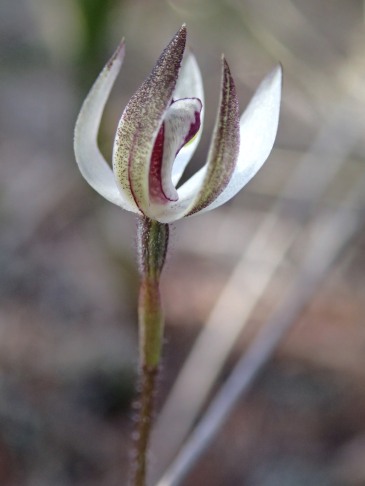 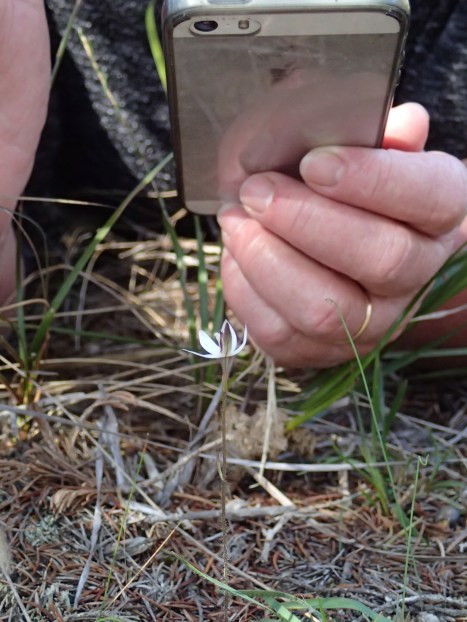 Deb taking a photo on her iPhone. Great size comparison 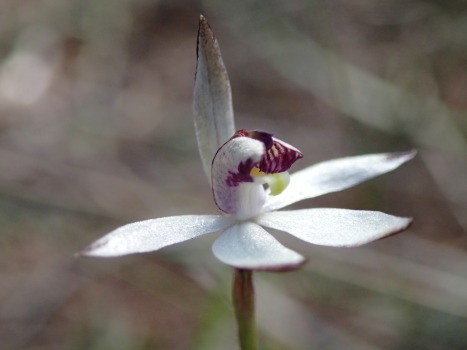 Pic below is of the Banded Greenwood I mentioned above that lead me to the sugar orchid.

Still looking fresh unlike his nearby friends

We then made our way back to the Triton and moved further West and turned North along the railway line. We parked up and had a bite to eat before venturing out for another hunt. Deb spied another Sugar orchid and I took a photo of the habitat it was found in and what we get up to taking these photos.

Deb down n dirty getting a photo 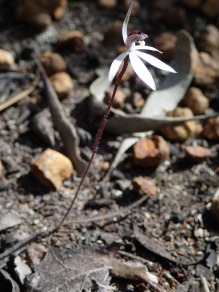 Another flower out in the open this time

Another Red beak sprouting, lone Snail orchid and Dancing spider (Caladenia discoidea) are found in this area, before we head over the railway line. 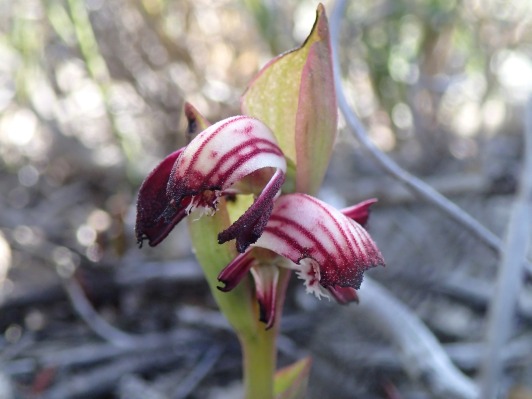 Immediately we find what we thought was another sugar orchid, however on returning home and checking the photos on our computer we notice it is in fact a Western tiny blue orchid (Cyanicula aperta). These are found August to early October from Dumbleyung to Mount Ragged. We now laugh that we were so blinded to the fact they were two very different orchids, just both so small, so just appeared to be variants in colour only. 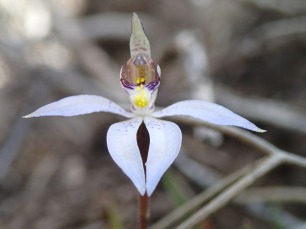 Much paler hence confusing it with a Sugar orchid 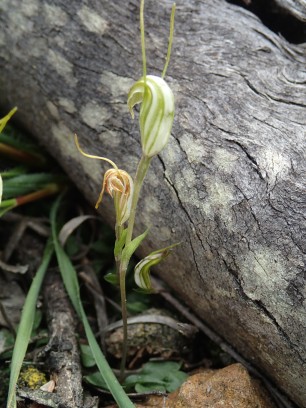 Standing tall n strong . Not so his neighbour

Stalked pointed leaves to the rosette 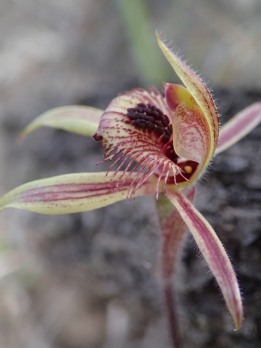 Time to head south so we make tracks west until a road heading south is found. At a place where the road had been straightened we take the old track and stop for lunch. Deb spies two Dancing spider orchids and finally a Jug orchid (Pterostylis recurva) fully opened.  I locate some more Donkey orchids then on the other side of this small triangular piece of bush I find some beautiful Esperance king spider orchids. More Donkey orchids found then onward further south. 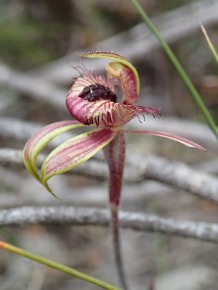 Little tuck under with the lateral sepals 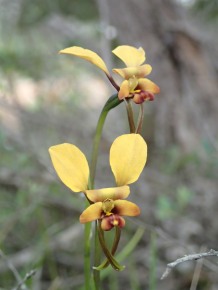 Second flower juts out from the main stem

Looking into the jug 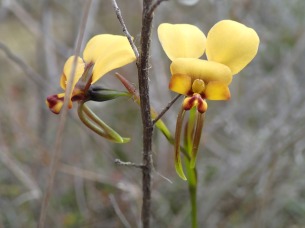 We stop as the track turns east to a farmers paddock and check around as we can see more Donkey orchids from the Triton. After looking around only Donkeys found here. 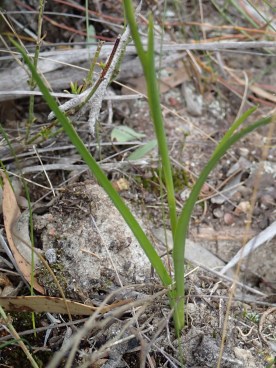 The track itself does head straight ahead it just reduces in size and standard. Very weedy now so we cross over the creek at a granite ford. A little further along a small patch opens up to the right, so we decide to check it out.  A little patch of yellow catches Deb’s eye and she calls me over as she has found a season first Common bee orchid (Diuris decrementa) which flowers from August to November and is found from North of Perth to East of Esperance. 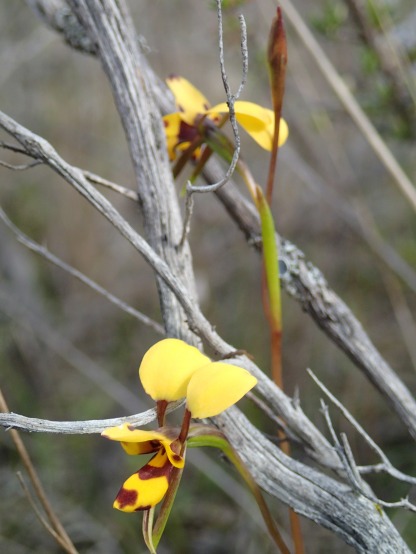 We finally make it back to the road and head south stopping a few more times but only finding a single Cowslip orchid. 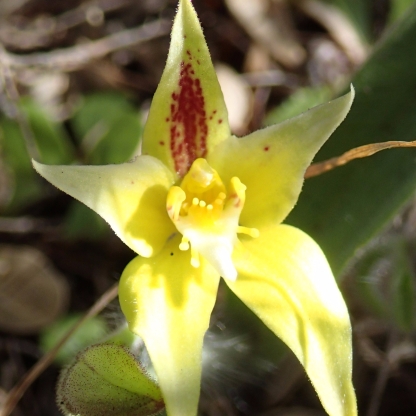 At the intersection we make a final stop and cross the road to have on more search for anything. Deb calls me over as she finds some Esperance King spider orchids. Now the word some is a little bit understated … There are so many it is impossible to count them. 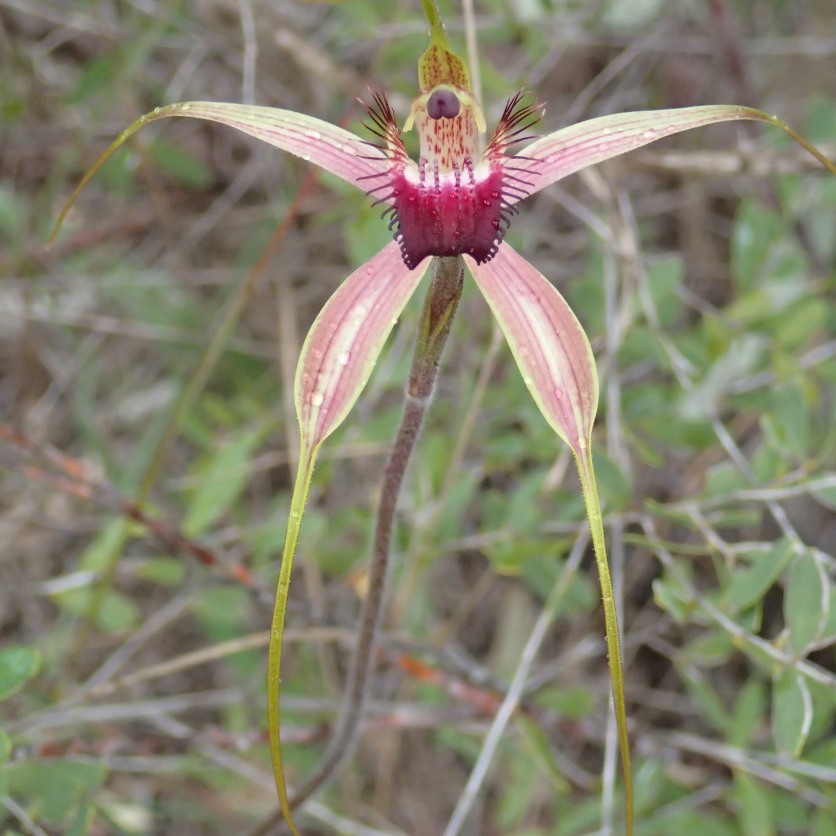 Also found in numerous clusters were Wispy spider orchids. Unsure of the exact type though. 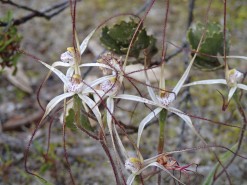 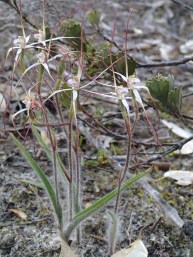 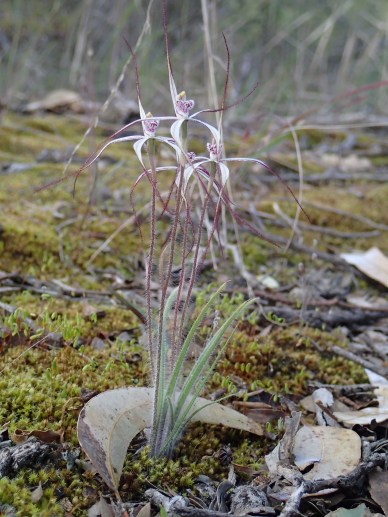 Some single specimens were also found but I will not attempt to name the exact types of these either. 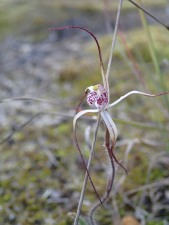 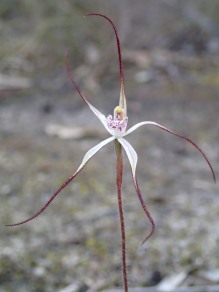 This final location ended an awesome day with new finds and so many orchids in one place… Nature is grand alright !!!