We had planned to leave tonight and camp up at Mt Madden, however as I drove the Triton home from work the ENGINE light remained on, then as the sun set we noticed the headlights were not working. Called Dave our mechanic, who came around and after 2hrs he had replaced our globes, ballasts and exchange. So now we have lights and the ENGINE light is no longer on. We slowly pack the Triton and camper trailer and then go to bed with plans to leave early in the morning.

Woke up around 5am, showered, last minute packing and then off to Puma to fill up the Triton. Around 6am we are finally on our way. First stop is the Ravensthorpe lookout which was the very first place ever that we found Jug orchids. Guess what is the first orchid found is ? …. Jug orchid (Pterostylis recurva), what a great coincidence. As towing our camper at slow speed up a gravel hill is proving a challenge, we drive to the top and slowly make our way down. 2nd orchid found is Western tiny blue orchid (Cyanicula aperta). A few scattered plants only, then a great group is found by Deb at the side of the road. 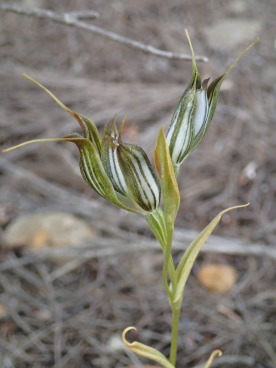 Recurva relates to the curved backwards of the lateral sepals 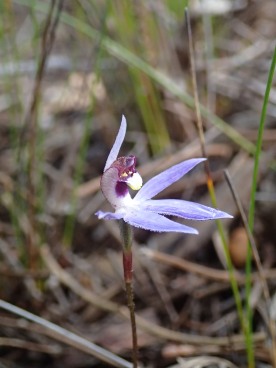 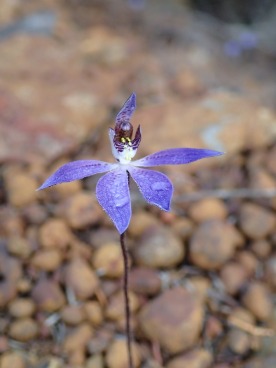 Nothing further found, other than more Jugs and Tiny Blues, so we make our way back to the track on level ground and closer to the Hwy we find some more Pterostylis orchids. We have now added another location for the Midget greenhood (Pterostylis mutica). Also found were some good old Banded greenhoods (Pterostylis vittata). Next stop is Ravensthorpe for a toilet break.

Up to 15 pale green flowers 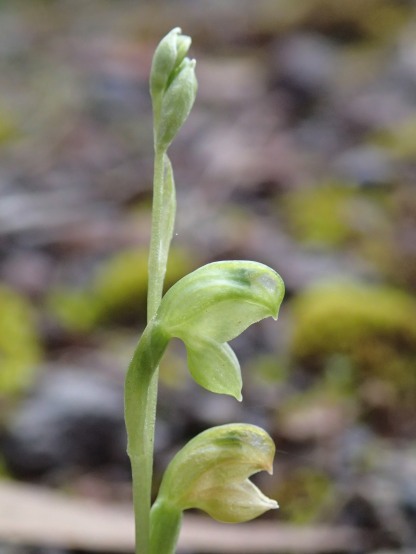 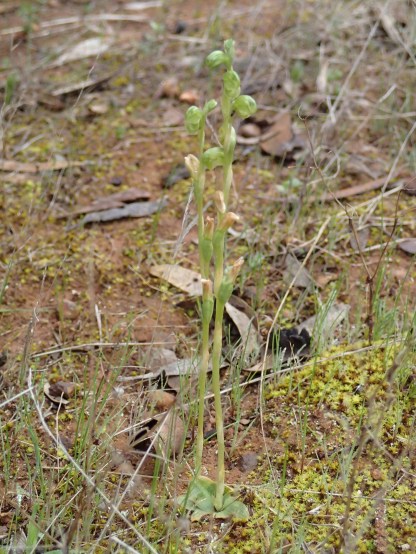 Lake King Nature Reserve on the Old Newdegate Rd is checked out with only Western tiny blue orchids found. Further along the road at the Dunn Rock Nature Reserve we find a spent Frog greenhood (Pterostylis sargentii) and a yet to flower Red beak (Pyrorchis nigricans).

Closed up and fertilised 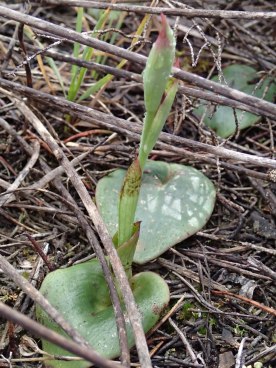 North of Newdegate we pull into a gravel pit for lunch, which is in the Rockview Nature Reserve. Here we find another Jug orchid. Our planned destination of Dragon Rocks Nature Reserve is reached just after 1pm and our first find is the little Sugar orchid (Ericksonella saccharata). Further down the track our first glimpse of yellow delivers us our first Cowslip orchid (Caladenia flava subsp. flava). Eye catching as usual. 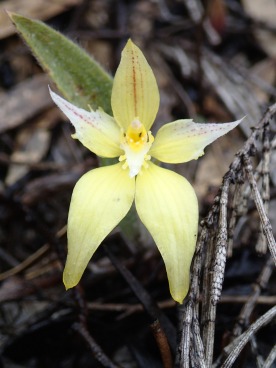 We venture deeper into the bush and another colour appears. Pink. The first of many Pink candy orchids (Caladenia hirta subsp. rosea) is found and nearby is the first spider orchid of the day. These pretty orchids are found from Kalbarrie to Israelite Bay and flower late June to September. Common spider orchid (Caladenia vulgata) would appear to be the species found. Another yellow orchid is found. Western wheatbelt donkey orchid (Diuris sp. ‘western wheatbelt’) seems to be the one due to location. 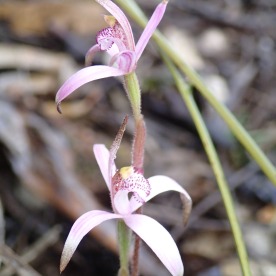 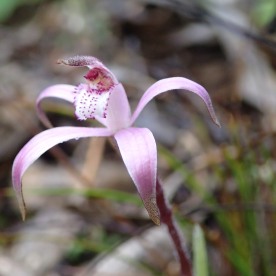 Up to three pale to deep pink flowers 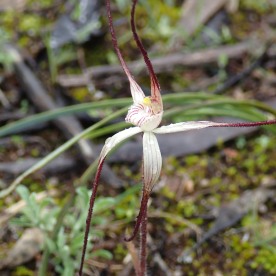 Yet to fully bloom in the wet weather

Another spider orchid is found with much darker red tips to petals and sepals plus a larger labellum as well. Location and these colourings lead me to name it Ballerina spider orchid (Caladenia melanema). Found in the Pingaring – Lake Grace area (30kms away),  flowering August to mid September. We make it to Dragon Rocks themselves and growing on the granite are some Little laughing leek orchids (Prasophyllum gracile). Other spider, donkey, candy and sugar orchids are found, but as it is nearly 3pm we make tracks back to Newdegate to travel westwards. 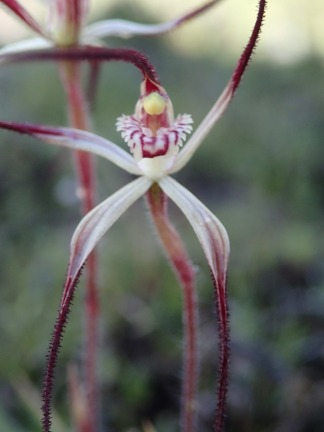 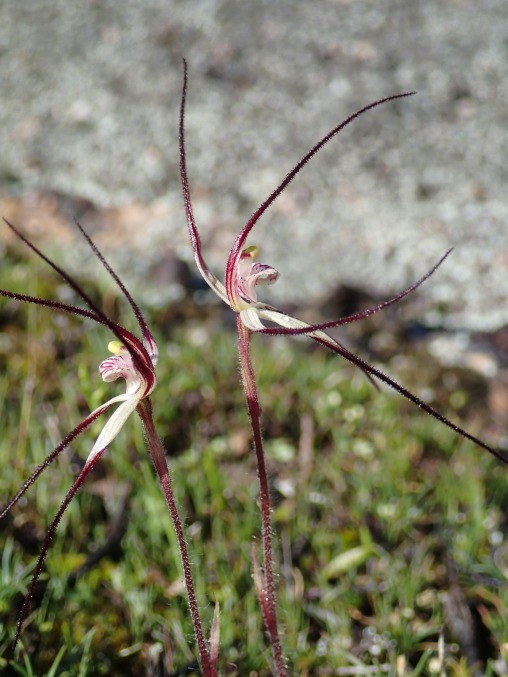 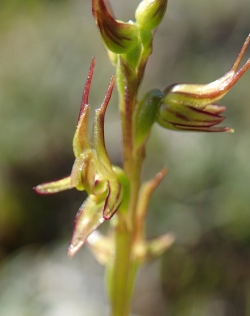 Quick stop made at South Buniche Nature Reserve where we find some Dark banded greenhoods (Pterostylis sanguinea) and more Jug and Sugar orchids. Then onto Lake Grace lookout, a favourite location of ours, that has yet again produced results. First up is the Chameleon spider orchid (Caladenia  dimidia). Also found nearby was another Common spider orchid.

Up to 10 fleshy, dark reddish-brown to green , white banded flowers

Up to 3 white to creamy-white flowers with narrow, usually pendulous petals and lateral sepals

Overnight in Wagin at the local motel, very pricey for such a basic room, but as we ran out of daylight and with possible rain overnight, it seemed the easier option. Pizza enjoyed for dinner and time for sleep after a long first day. 16 orchids ticked off the list.