Saying our goodbyes to Kirstie and Hamish we set off for a leisurely trip home to Esperance. Usually a 7 to 8 hr drive over 725km, we however take 15hrs, as we make numerous stops to hunt for orchids.  Our first destination is Mount Dale in the Helena National Park. The wind is very chilly, however we brave this on our search for some orchid colour. We are not disappointed. First colour spotted is “yellow”. A Donkey orchid is found, but which one?? I’m making the call for the Winter donkey orchid (Diuris brumalis) which flower late June to August in a range from Jurien Bay to Collie. They prefer lateritic or granitic soils and up here in the hills that is the soil types encountered. Other specimens were found throughout our search of this area. 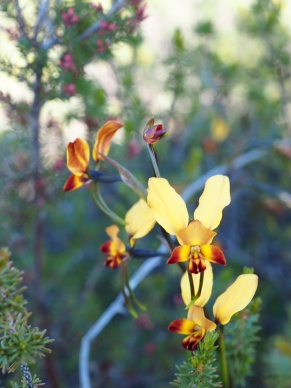 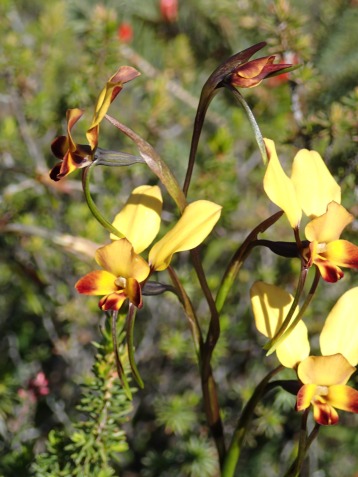 Yet to fully open

Close to our first donkey the next colour found is “pink”. Little pink fairy orchid  (Caladenia reptans subsp. reptans) is found growing in the shelter of a granite boulder. These little beauties flower July to early October in a range from Northampton to Esperance. Singles, pairs and groupings are found in our extended search.

Deb then finds the colour “green”. A small patch of snail orchids hidden in a bush so only one visible for a  photo. Could not see the rosette however based on location, pointed hood with brownish tones and medium sized lateral sepals, I  will be naming it as Slender snail orchid (Pterostylis sp. ‘crinkled leaf”). These flower late June to September in a large range from Perth down to Albany. Another patch yet to fully flower was found and the rosettes appear to confirm my classification.

Pushing up through thick scrubbery

Another species of “mixed” colour is found by Deb. Once again hidden or protected near a granite boulder. It appears to be an Autumn leek orchid (Prasophyllum parvifolium) which has been fertilised.

Possible pollinator on one of the flowers

Next is a similarly “mixed” coloured orchid, which I found after pushing into the scrub for a few metres. Firstly I found a large patch of leaves and then with a slower look some orchids flowering were discovered. The genus of Cyrtostylis is known, but which species is it? By the smaller , duller flowers they must be the Midge orchid (Cyrtostylis huegelli) which is found from Kalbarri to east of Esperance during July and September.

Many leaves, only a few flowering so far

Well Mount Dale proved a good hunting ground with 5 species flowering, plus Jug and Bird orchids yet to flower found. Already 2.5 hrs (65kms) into our drive home, so we better move on, or we will break our 12 hr record for the drive home. Next stop planned is Williams Road (Mud Map SE6) however we detour into Westdale Road (Mud Map SE5) to see if we can find some of the species listed in the guide. First off we find the Jug orchid (Pterostylis recurva) which flowers August to October in a range from Geraldton and Israelite Bay.

One flower in 3 stages of bloom

Deb is off exploring further whilst I slowly finish taking phone and camera pics of the Jug orchid. Only 2 mtrs away I find the Blood spider orchid (Caladenia filifera) and call Deb back to see. On the way back she also finds other specimens less than a metre off her original walk track. They are so hard to see until you find them , then they stick out more easily as we continue searching. 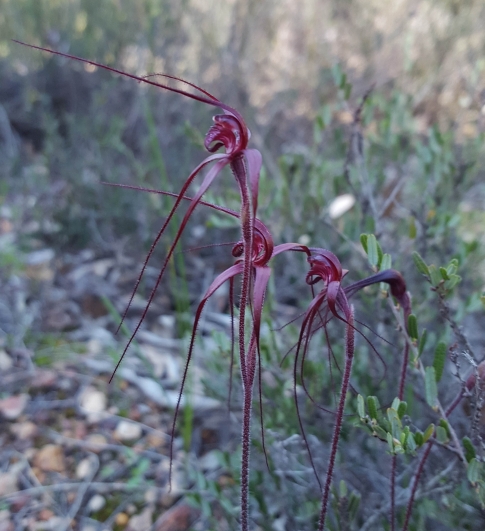 Glistening in the sun

Disbursed around the area are Common donkey orchids (Diuris corymbosa) which flower August to October in a range from Gingin to Bunbury and inland to near Brookton, our actual location funnily enough.

Up to eight flowers per plant 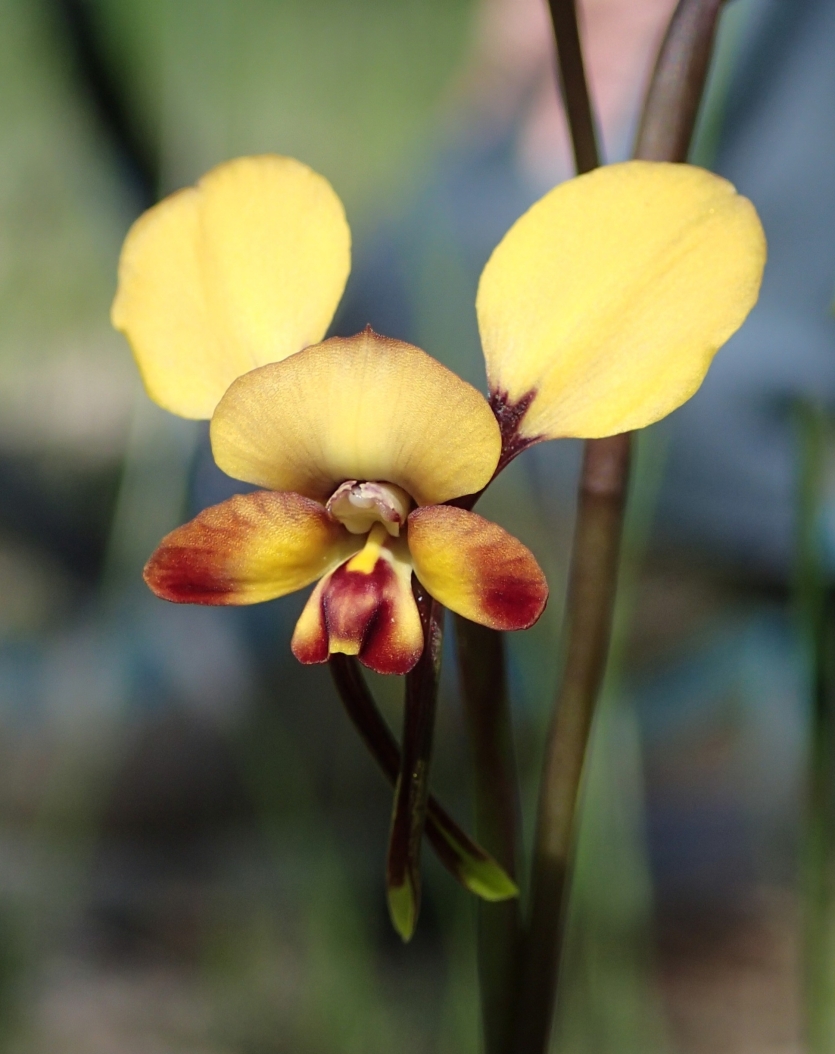 Another new find for the season is the Blue beard (Phelandenia deformis) which flower late May to October in a range from Murchison River to Israelite Bay. Only 3 small flowers found but still it is a new one for this season. 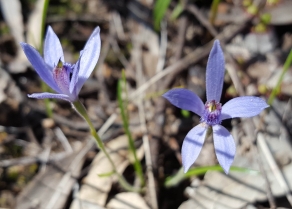 It is now 4 hrs since we left and we have only covered 90kms of the distance home. Better get a move on. 20kms later we arrive at Williams Road (Mud Map SE6) where we had planned to explore for at least an hour as Deb had quickly checked this out on Tuesday when she drove to Perth, when she found at least 4 species flowering. First up we locate some more Common donkey orchids before Deb calls me over to a patch of at least 3 species in close proximity. 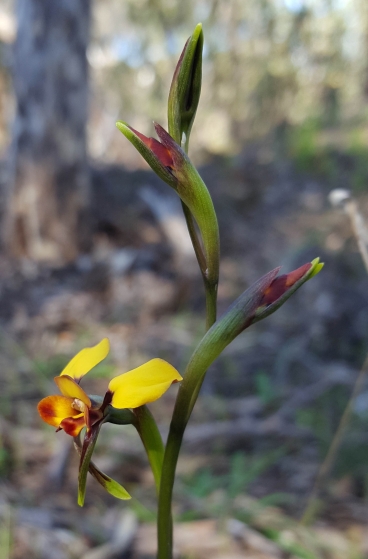 Up to 14 stem leaves and 25 flowers per plant

Then as previously found in this location, there are Shell orchids everywhere. Many are finished as they flower from May to August. Mud Map records both Red and Brown veined shell orchids here in July so we have missed the peak flowering period it seems. From the flowering plants I believe them to be Red-veined shell orchids (Pterostylis hamiltonii) as they are darker coloured and most have the labellum protruding from the hood formed by the dorsal sepal and petals. These flower in a range from Toodyay to the Stirling Range in woodlands and Rock Sheoak thickets.

Up to 6 stem leaves 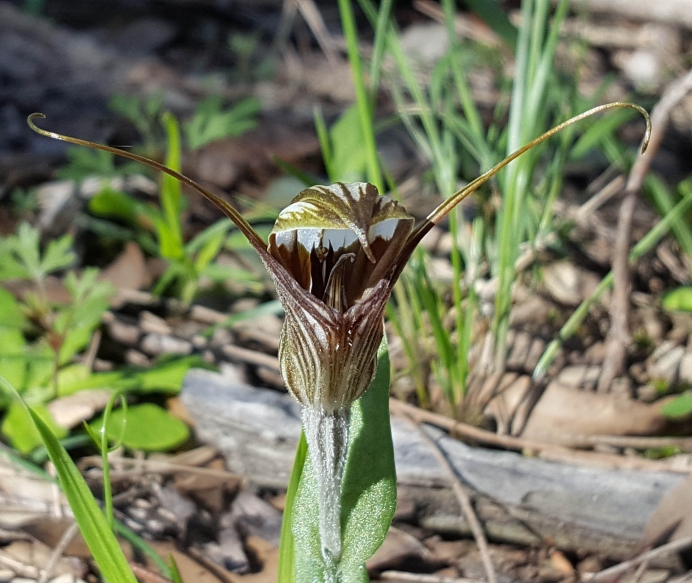 Also located close-by are some Little pink fairy orchids. So 4 species all within a 3 square metres area. Great find Deb.

Leaf tinged purple on the underside 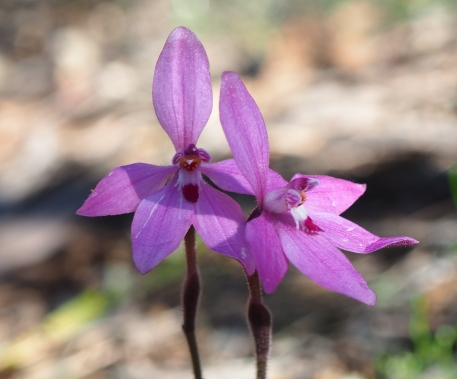 Labellum – Gives the common name away 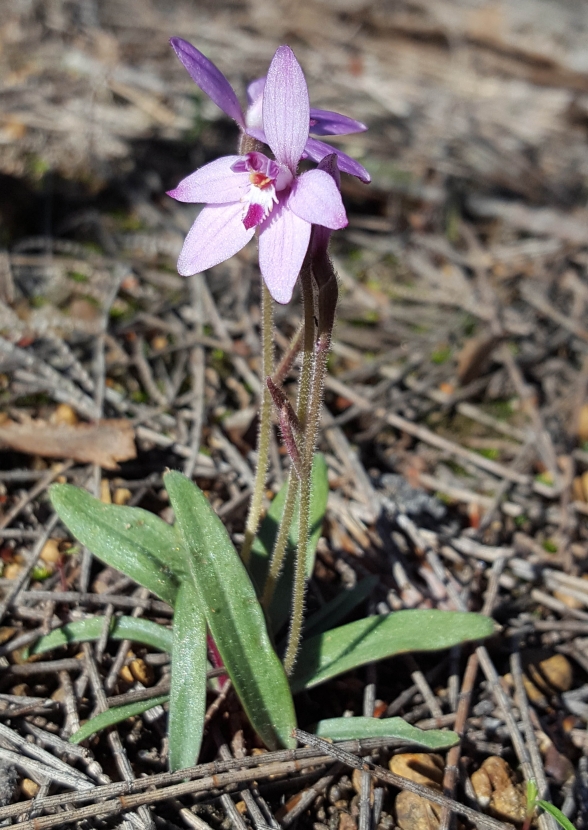 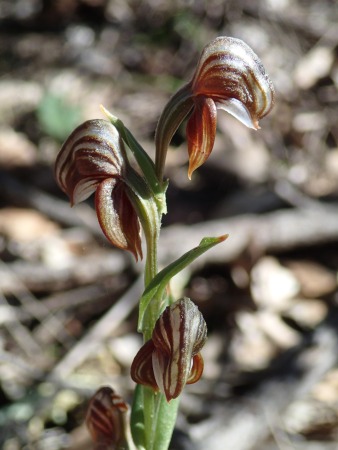 It’s now after 1.15pm and we have only travelled 110km of the 725km trip. Back to the Triton and a huge patch of spent shells is found plus the very first Cowslip orchid (Caladenia flava subsp. flava) for the season. These flower from north of Geraldton to Israelite Bay during July to December. 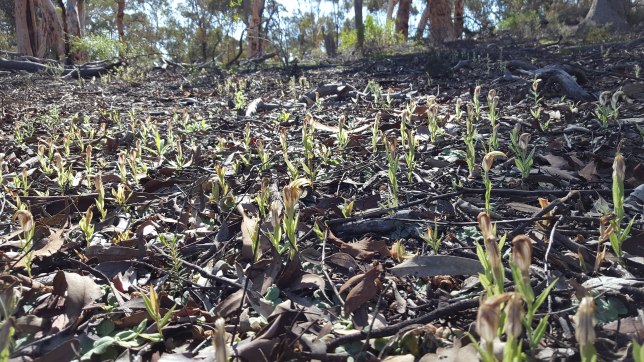 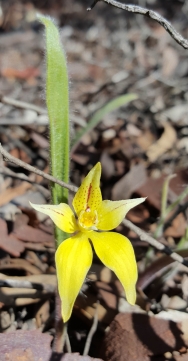 Onwards to Brookton where we grabbed a Parmi Wrap for lunch. (Parma for Farmer – raising funds for drought relief in NSW/QLD). Eating whilst driving to catch up some time our next planned stop is the Corrigin Wildflower Trail which goes around the airport  and is part of the Corrigin Nature Reserve. Taking the road in from the Dog Cemetery our first find are some more Little pink fairies

Nothing else found so onwards we go at a slow pace, then I jump out to walk and find some Frog greenhoods (Pterostylis sargentii) which flower between July and October in a range from Northampton to Grasspatch.  They are very small and growing underneath bushes, making photo taking a lay down on the job task. Further Frog greenhoods are found along the trail. 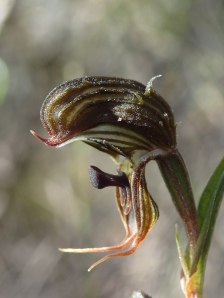 Bright green colouring in the sunshine 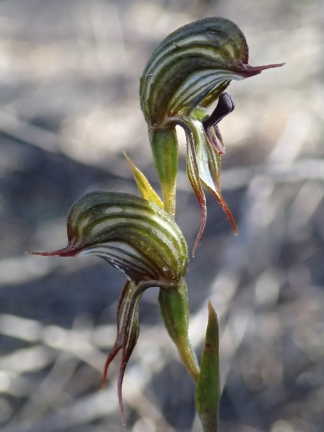 Up to 6 flowers per plant

Glistening in the sunshine

Up to 10 stem leaves 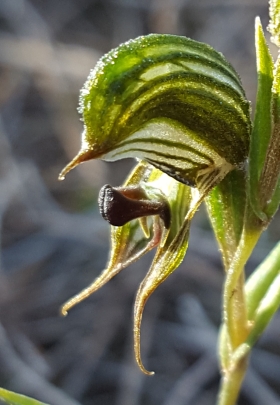 Further along the track whilst walking I spy some nice snail orchids. They are the Robust snail orchid (Pterostylis dilatata). Another grouping was found further along by Deb whilst driving slowly along. 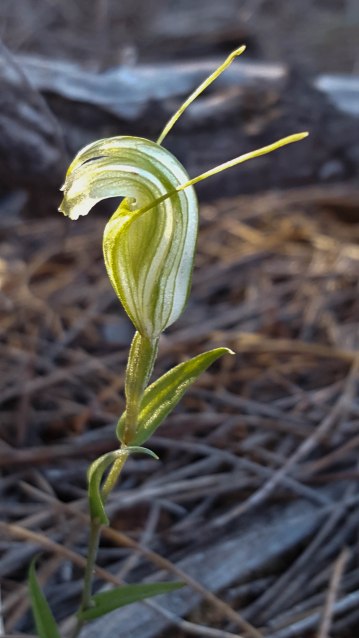 Standing up to 150mm in height 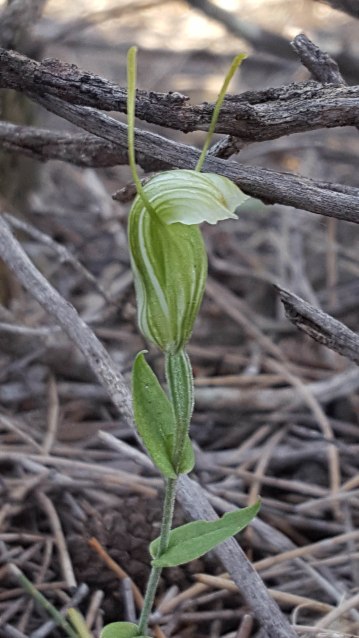 A sole Jug orchid was also found just yawning like a Pelican  and further along what appears to be Pterostylis arbuscular which is a Mallee form of banded greenhood. No common name yet.

Finally a donkey orchid was found. Based on location alone this must be the Western wheatbelt donkey orchid (Diuris brachyscapa) which flowers July to September between York, Tenterden and Ravensthorpe. Corrigin is slightly east of the line York to Ravensthorpe. 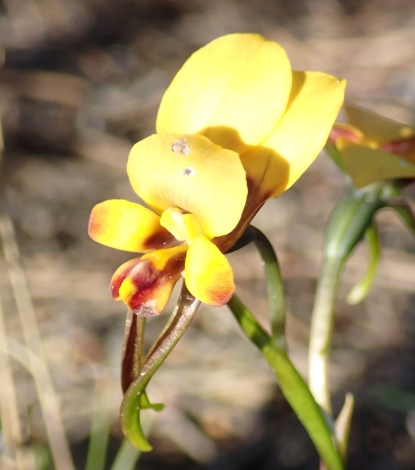 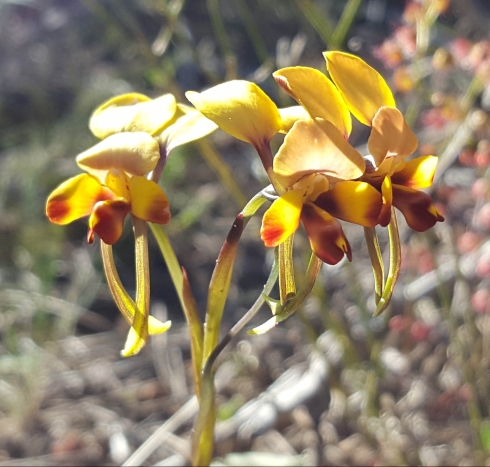 Up to four flowers per palnt 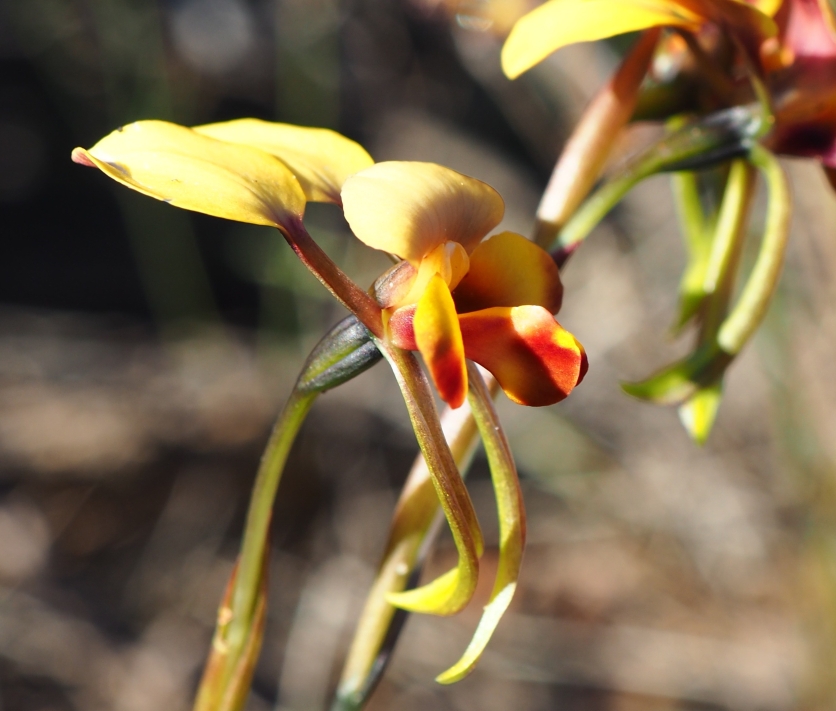 Nearly 4pm, or 8hrs into our trip home and we have only completed 220km of the 725km required. Best move on to our next planned stop, Macrocarpa Trail near Kulin. Just before 5pm Deb finds our first orchid of this trail. Appears to be Hairy-stemmed snail orchids.

up to 3 stem leaves

Time for a chat

Lateral sepals up to 35mm in length

Standing up to 150mm in height 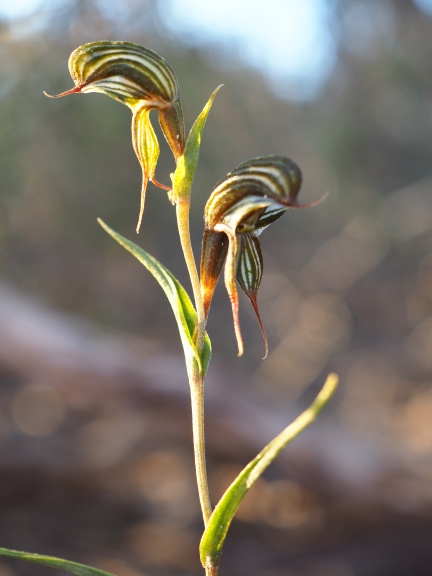 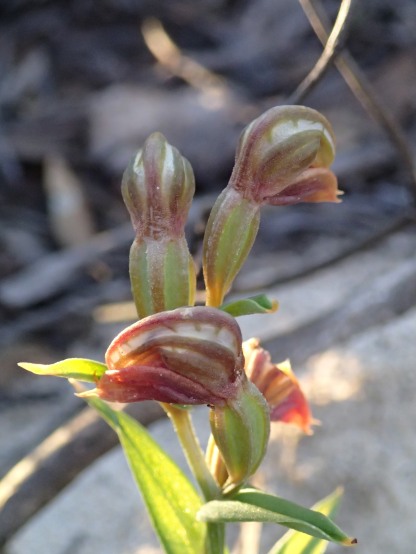 Then as the light is fading fast we venture into the bush and finally there they are.. Spider orchids in flower. We now rush to get as many photos as possible .. They are so small and with the fading light our photos are not the best but we need to record the find. From the location and size I believe we found the Common spider orchid (Caladenia vulgata) and the Pendant spider orchid (Caladenia pendens subsp. pendens) which both flower during August. The former July to October and the latter August to early October. The Common spider orchid ranges from Kalbarri to Esperance whilst the Pendant spider orchid ranges from Wongan Hills and Walpole. The Length of the petals and lateral sepals are a distinguishing feature. 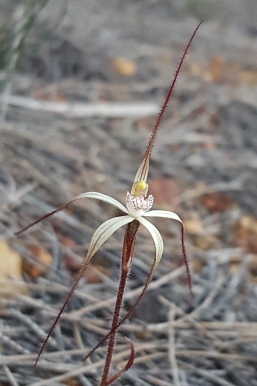 Found in a variety of habitats

Tangle of petals and sepals 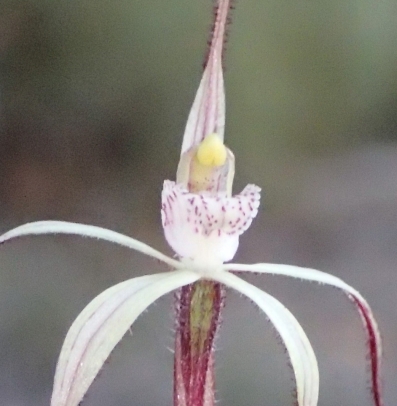 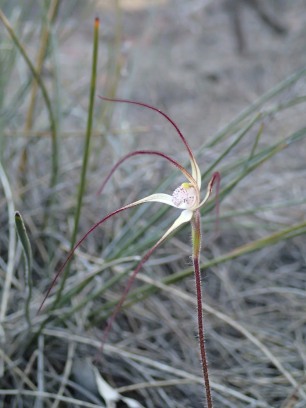 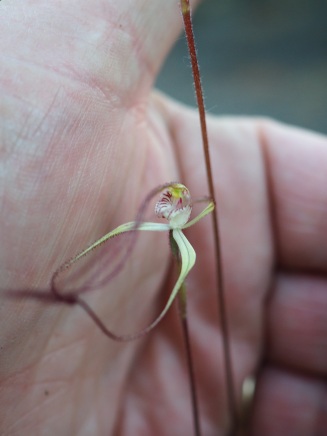 The sun finally sets on our orchid hunting so we make tracks via Lake Grace for Steak Burger / Fish n chips dinner. Then after 15hrs we arrive home at 11pm. Long day however very happy at finding 20 species of orchid.